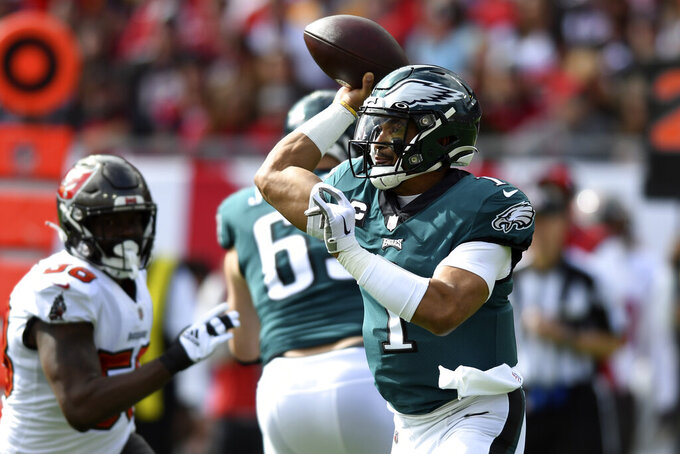 TAMPA, Fla. (AP) — Jalen Hurts left the stadium in a walking boot, carrying the burden of an ineffective offense that didn't show up until it was too late.

Hurts threw two interceptions, the NFL’s No. 1 rushing offense was shut down and the Philadelphia Eagles had no chance against Tom Brady and the defending Super Bowl champion Tampa Bay Buccaneers.

After stockpiling wins against losing clubs — Philadelphia was 0-6 against playoff teams — and earning a wild-card berth in Week 17, the Eagles (9-9) were outclassed by the Buccaneers in a 31-15 loss Sunday.

“Regardless of how I feel, I didn't play a good one,” said Hurts, who missed a game last month because of a left ankle injury. “I could've been better, definitely."

But he had no answers against the banged-up Buccaneers, who dominated despite missing several key starters and losing a couple of more in the game.

“We made some coaching mistakes and there are some plays guys are going to want back," Sirianni said. "We didn't make some plays and we didn't coach good enough.”

The Eagles led the league with 159.7 yards rushing per game but managed only 35 in the first half, including 32 from Hurts, when the game was still within reach at 17-0.

Hurts gave Philadelphia its best chance to score late in the second quarter when he hit Quez Watkins for a 35-yard gain to the Bucs 27. But Mike Edwards stepped in front of Hurts’ pass to DeVonta Smith in the end zone two plays later and got the interception.

It was still 17-0 in the third quarter when Philadelphia’s defense forced a three-and-out deep in Tampa’s territory. But Jalen Reagor fumbled the punt and the Buccaneers recovered at the Eagles 48.

That turnover led to a touchdown and Hurts threw another pick on the next possession that led to another score, putting the Buccaneers up 31-0.

Boston Scott broke loose for a 34-yard TD run to prevent the shutout and Hurts tossed a 16-yard TD pass to Kenny Gainwell to get the Eagles within 31-15.

It was too late to matter against the Buccaneers (14-4).

Hurts finished 23 of 43 for 258 yards. He got away with a couple of dropped picks, including one on the first drive of the third quarter.

Hurts' last pass of the game was caught by Brady on the sideline. Brady turned around and threw it into the stands.

Hurts came a long way in his second season. He threw for 3,166 yards and 16 TDs with nine interceptions, completing 61.3% of his passes in the regular season. He also led the team with 784 yards rushing and 10 TDs.

Still, Hurts will face an offseason of uncertainty as the front office determines whether he’s the starter going forward. The Eagles have three first-round picks and would be in the mix to pursue Russell Wilson and Deshaun Watson if those players are available.

“He didn't play his best game but you don't take the body of work he had for 17 weeks and put everything on this game,” Sirianni said of Hurts. "I felt like Jalen grew throughout the year, he got better as a passer, he got better reading the defenses, getting the ball to the right place, he developed so much in his ability to extend plays. .... I feel really good with what we have in place at the quarterback position. I thought he had a great year. I can't say enough good things about Jalen the person and the player. I feel really good about him. I know none of us are satisfied with the game, but I'm really pleased with how he came along this year and the leader he is on this football team.