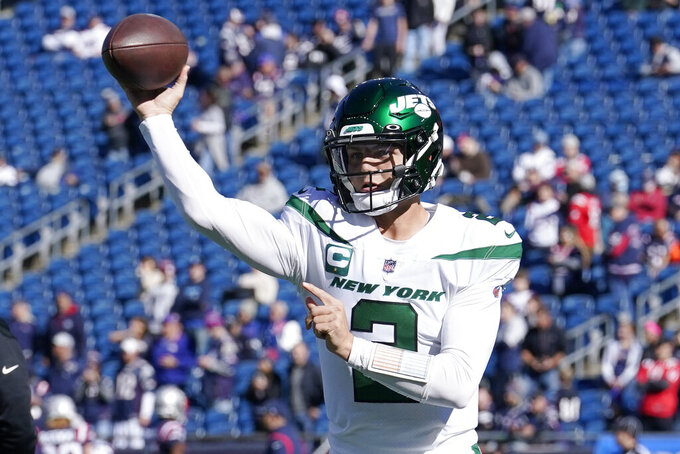 FLORHAM PARK, N.J. (AP) — Zach Wilson will have a familiar face by his side for the rest of the season.

Beck began working with the team last week and was on the sideline wearing team gear and a headset during the Jets' 34-31 victory over Cincinnati on Sunday, led by Mike White's stunning performance.

Wilson, who is sidelined with a sprained knee ligament, has worked with Beck for a few years. The two even met up in Utah during the Jets' bye-week break two weeks ago.

“He went to see John and I was like, ‘Why not just bring him here?’” coach Robert Saleh said Tuesday. “So we just started talking about it and one thing leads to another. Now there’s just a really good plan in terms of how to get him through the rest of the year and keep himself connected and keep everything tight.”

The 40-year-old Beck had never previously been an NFL coach, but has become one of the game's leading personal quarterback gurus while working with several pro passers at his 3DQB facility in Huntington Beach, California.

The hope is Beck will able to assist offensive coordinator Mike LaFleur, quarterbacks coach Rob Calabrese and senior offensive assistant Matt Cavanaugh in helping Wilson, the No. 2 overall pick, develop. Beck has familiarity with the Shanahan-style offense LaFleur is running since he played under Mike Shanahan in Washington.

“We thought it would be really good to just have John in our building, learn the verbiage that we’re teaching along with the things that are being asked of all our quarterbacks,” Saleh said. “So when he is having those conversations, those on-the-side conversations, everybody’s speaking the same language. And he can tie in what he does as a quarterback guy to the students.”

Wilson, who could return as soon as next week, has struggled in his brief NFL career. He threw four touchdown passes and nine interceptions during his six starts, sometimes flashing the playmaking ability that made him a star at BYU but also having issues with his mechanics, footwork and making the so-called “easy” short throws.

Beck was a second-round draft pick of Miami in 2007 out of BYU. He played in nine career games with the Dolphins and Washington, throwing three touchdown passes and seven interceptions. Beck also spent time with Baltimore and Houston, as well as the BC Lions of the Canadian Football League.