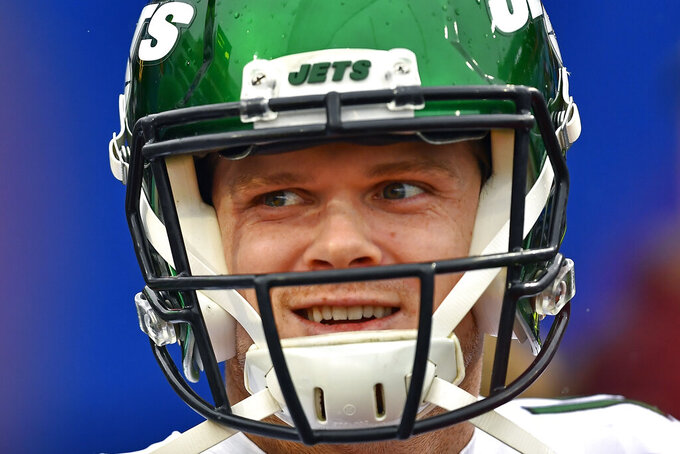 FILE - In this Dec. 29, 2019, file photo, New York Jets quarterback Sam Darnold (14) smiles before an NFL football game against the Buffalo Bills in Orchard Park, N.Y. Darnold was mostly pleased with how he finished last year with the New York Jets. The young quarterback enters his third NFL season knowing he needs to be even better. (AP Photo/Adrian Kraus, File)

NEW YORK (AP) — Sam Darnold was mostly pleased with how he finished last year with the New York Jets. The young quarterback enters his third NFL season knowing he needs to be even better.

Make or break? Not really.

But Darnold, who has flashed promise with his playmaking abilities, along with some inconsistency mixed in, needs the arrow to go way up on his progress this year.

“There’s definitely room to grow,” Darnold acknowledged Tuesday in a Zoom call with reporters. “Throughout the back half of the season, I thought I improved on a lot of things. I thought I got more consistent and was just able to get more confident with the offense.

"There’s obviously room to be better for this next year and, for myself, I’m just trying to be as consistent as possible and play at a high level.”

That's the hope for the entire franchise, which has focused its offseason on helping Darnold — with protection and playmakers.

New York also added some playmakers around Darnold to help boost a unit that finished last in the NFL in total offense. The Jets signed running back Frank Gore, the NFL's No. 3 all-time rusher, to complement Le'Veon Bell in the backfield. They lost top receiver Robby Anderson to Carolina in free agency, but signed wide receivers Breshad Perriman and Josh Doctson. Wide receiver Denzel Mims and running back La'Mical Perine were also key draft selections.

But, has it been enough to end a playoff drought that sits at nine years, third longest in the NFL behind only Cleveland (17) and Tampa Bay (12)?

“We definitely have the guys to be able to win football games," Darnold said. “But as we see every year, it’s about putting everything together. Right now, we still have a long way to go."

Darnold had a rough start in his first season in coach Adam Gase's offense. He missed three games with mononucleosis and then found himself the subject of jokes after prime-time TV cameras showed him on the sideline saying he was “seeing ghosts” during a loss to New England.

At that point, questions were raised whether Darnold could be the franchise quarterback the Jets envisioned when they drafted him No. 3 overall in 2018.

He turned things around, though, in the last eight games by throwing 13 touchdown passes with only four interceptions in a 6-2 finish.

During the offseason, Darnold has been working again with personal quarterback coach Jordan Palmer. He also spent time with Buffalo's Josh Allen and Washington's Kyle Allen during the winter before the pandemic.

“I’ve been working on throwing to the right a little bit more,” Darnold said. “I feel like sometimes when I throw to my right, it’s been all arm, so I’ve been looking into trying to step into my throws and use more of my body and my legs going to my right.

"And then just continuing to work on deep-ball accuracy is also huge for me. I feel like I left a couple opportunities on the table last year and I’m looking to hit those throws this year.”

With team facilities closed and travel and social distancing restrictions in place, NFL players and coaches have had to “meet” through online video sessions.

The continuing development of the rapport between the coach and quarterback will be a major story line this season, and whether Gase will be able to fully tap into Darnold’s potential. Despite the lack of in-person conversations, Gase likes what he's hearing from Darnold.

“Before, he was asking a lot of questions, and now he’s more telling us how he should have done something, which is great,” Gase said during a conference call last week. “When you’re a coach and you start hearing a player talk like that, you get really fired up and you can see it’s coming. He’s really understanding this and he’s understanding the ‘why’ behind things.

"You can tell there’s an irritation, too, when he sees mistakes made from last year, especially at the beginning of the year. That’s not going to happen again, and the longer we go in this thing, the better he’s going to get.”

Darnold understands all that, and embraces the fact as a team leader and face of the franchise, all eyes — teammates, coaches, fans and media — will be on him.

“Right now, I think it’s about continuing to do what I’ve been doing,” Darnold said. “I think as I grow and mature and continue to be the quarterback for this organization, I’m just going to continue to mold into the leader that I’m going to become.”