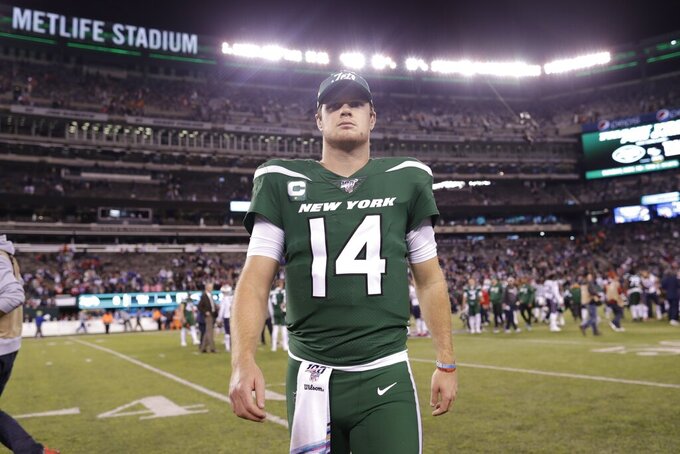 But, Darnold has moved on from it — even if it might be a while before everyone does.

"For me, especially kind of in the football world, that term gets thrown around a little bit," Darnold said Thursday. "For me, it was a moment in time, especially in the game, I maybe wasn't seeing things as clearly as I hoped that I would, and that was kind of what that meant.

"Nothing more, nothing less than that. That's really all that it is."

It punctuated the worst game of Darnold's young NFL career as he went 11 of 32 for just 86 yards with four interceptions, a lost fumble and a measly 3.6 quarterback rating in the 33-0 loss.

Now, all eyes will be on how Darnold responds when he takes on the Jaguars at Jacksonville on Sunday.

"He was definitely disappointed," offensive coordinator Dowell Loggains said. "And, I don't want to speak for him too much, but he was disappointed because he knew he didn't play his best game. And he was really eager to watch (the film) and put it behind him."

To his credit, the 22-year-old quarterback has handled the criticism — and jokes at his expense — well during the past few days.

Coach Adam Gase said Tuesday the Jets were angry the comments even made it on the air during ESPN's broadcast of "Monday Night Football" after they were approved by an NFL Films representative. But, Darnold even took that in stride, saying he wouldn't be opposed to wearing a microphone again.

"I'm going to continue being myself," he said. "If I start worrying about that kind of stuff, then I'm worried about the wrong things."

Since Darnold's comment went viral, several former quarterbacks have spoken during TV and radio interviews about experiencing growing pains as youngsters in the NFL and dealing with distractions while not delivering victories.

"I was able to get over it on my own," Darnold said. "But, I think having those guys talk about the clip that was aired live, I think having them talk about it cleared my mind a little bit. But getting over a loss like that, getting back here and watching the game, and then right when I started watching Jacksonville film, in my head, I was done with it. So, that's how I have to look at things and that's what I did."

It wasn't immediate, though, and Darnold acknowledged that watching the film of his turnover performance against the Patriots was difficult.

"Yeah, 100%," he said. "Getting out there in the game and not executing what we had planned as always, it makes me sick to my stomach. It's a tough thing out there when you know exactly the look that you're getting and you just don't execute.

"That was on me, nobody else."

Darnold's footwork appeared to be off, but that was only one symptom of what he diagnosed as the bigger issue.

"I was thinking too much out there," he said. "I wasn't keeping things simple enough. I was trying to do too much and when I do that, I get myself into trouble."

It has been a strange start so far for Darnold, who came in with high hopes for a successful second NFL season.

He was up and down in the loss to Buffalo in the opener, acknowledging later that he was beginning to experience symptoms of mononucleosis, which would sideline him for three games.

In his return against Dallas on Oct. 13 — just over a month after he was diagnosed with the illness — Darnold looked as if he never missed any time by leading New York to a win and being selected the AFC offensive player of the week.

Then came as big a swing from one performance to another in his Monday night debacle. And, to add injury to insult, Darnold needed the toenail on his left big toe removed after being stepped on during the game.

The Jets fitted his shoe with padding to help him feel comfortable, and Darnold was a full participant at practice Thursday after being limited Wednesday.

Darnold is ready to get out on the field Sunday, prepared to see nothing in front of him but success.

"I feel like I'm in a really good place right now," he said. "The offense is executing really well in practice, which is a good thing. From that aspect, I think we've bounced back well. It's just about going out there Sunday and executing."