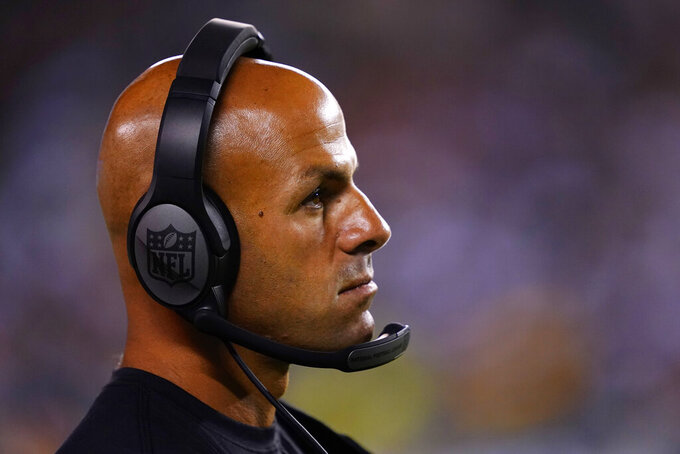 FLORHAM PARK, N.J. (AP) — There was some pushing, shoving and a couple of swings between the New York Jets and Atlanta Falcons.

The teams got together Friday for the first of two joint sessions at the Jets' practice facility — and the tempers matched the sultry heat early on.

“Our defense, their offense — a little skirmish,” Jets coach Robert Saleh said. “We settled it down and got a productive practice out of it.”

New York's defensive line and Atlanta's offensive line got into two shoving matches during positional drills that were quickly diffused. Then came the main event during 11-on-11 team drills when Jets defensive lineman Bradlee Anae got into it with a Falcons player and appeared to throw some punches as players from both teams quickly gathered and shouted at each other before the sides were separated.

“It was fine,” Falcons coach Arthur Smith told reporters. “You’re always going to have that. It’s like people (doing) a little peacocking as they’re running around each other. It was nothing."

The team drills on that field were paused for a few minutes, with both the Jets defense and Falcons offense huddling separately, before the practice was resumed.

Smith spoke briefly to the Jets players and he and Saleh chatted about the situation, with practice running clean the rest of the way.

“You're always going to have that the first couple of plays, and you've got to knock that out,” Smith said. “You've got to understand it goes both ways. It's like people circling and whatever. It's nothing. We got in a lot of really great work and I appreciate their staff.”

The teams have another joint practice session Saturday, leading up to their preseason game Monday night at MetLife Stadium.

“It was good to be able to get into a little groove and get a handful of plays in row together,” said Joe Flacco, New York's starting quarterback while Zach Wilson recovers from arthroscopic knee surgery. “To get to see a little bit different style defense, you always get in good work when you get to do that.”

The Jets seemed to be a bit sharper on both offense and defense, including big plays by rookie running back Breece Hall (75-yard TD run in team drills) and second-year wide receiver Elijah Moore (a short catch turned into a long gain by an impressive juke move).

“It was a productive practice,” Saleh said. “Seeing different coverages for our offense, seeing a much more different offensive tempo and shifting — a lot of movement from their guys and a lot of personnel — so it was good for us to get lined up. It was exactly what you want it to be.”

One of the highlights of team drills was Jets rookie cornerback Sauce Gardner picking off Falcons rookie quarterback Desmond Ridder — his former teammate at the University of Cincinnati.

Gardner was the No. 4 overall pick by New York and is competing for a starting spot opposite cornerback D.J. Reed in the Jets' secondary. Ridder was a third-rounder — No. 74 overall — in April and the second quarterback taken after Kenny Pickett went to Pittsburgh in the first round. Ridder is currently scheduled to be the backup behind Marcus Mariota.

Falcons rookie WR Drake London (knee) was with the team, but didn't practice while the team is cautious with the No. 8 overall pick. ... DL Marlon Davidson (knee) didn't practice. ... Jets DE Vinny Curry left during team drills with a hamstring injury. He walked to the sideline with a noticeable limp and slammed his helmet to the ground. ... DE Bryce Huff has an oblique injury that Saleh said could sideline him a few days. ... CB Brandin Echols (hamstring) returned to practice.

Saleh on Falcons second-year tight end Kyle Pitts: “He's a ‘create-a-player’ on Madden. That's exactly what you would look like. He's going to be a dynamic football player for a long time."