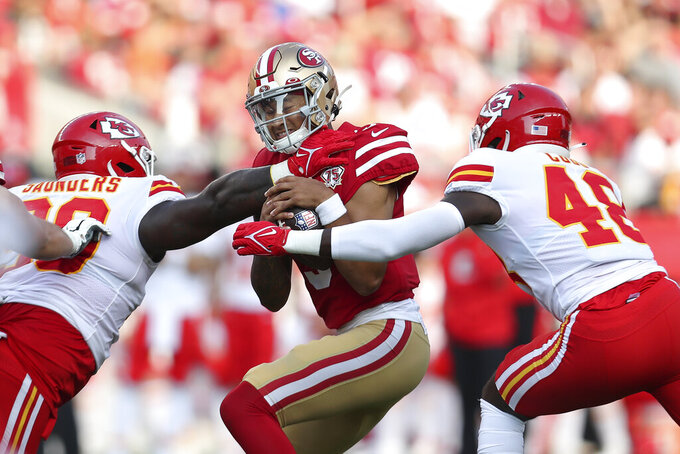 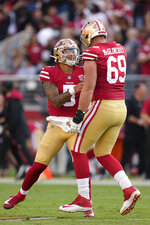 Lance threw an 80-yard touchdown pass that led to loud cheers from San Francisco fans, and also showed some rookie traits in his preseason debut during the 49ers' 19-16 loss to the Kansas City Chiefs on Saturday night.

“It was fun," Lance said. “Obviously left a lot of big plays out there. I wish I would have taken advantage of the opportunities that were given a few times. ... But it’s awesome to be out there playing again.”

The Niners traded three first-round picks to draft Lance third overall in April to be their quarterback of the future. But they also still have incumbent Jimmy Garoppolo, so how soon that future comes remains to be seen.

Lance had an up-and-down first performance with a few off-target throws, three sharp passes that were dropped by his receivers, and four sacks behind a spotty offensive line.

But he also delivered that perfectly placed deep pass.

“There was some good and some bad,” coach Kyle Shanahan said. “By no means was it perfect. Good first day. I didn’t want it to go perfect for him.”

Chad Henne threw a TD pass to Byron Pringle after a short cameo by Patrick Mahomes to begin the game, and rookie Shane Buechele scored on a 1-yard keeper with 1:14 to play to win it for Kansas City.

On the first play of his second possession, Lance faked a handoff and rolled to his left on a staple play in Shanahan's offense. With Brandon Aiyuk open in front of him, Lance stopped on the hash mark and threw a strike nearly 40 yards downfield to the right side of the field for the TD pass to Trent Sherfield.

“Being able to play with Trey is an amazing thing,” Sherfield said. “He’s a real phenom. He’s going to be really, really good in this league.”

That was the only TD for San Francisco in Lance's eight drives. He also led the Niners to one field goal and got them out of the shadow of their goal posts with a 34-yard pass to Charlie Woerner from his end zone.

Lance even got two opportunities late in the half to run the two-minute offense, but had little success. San Francisco managed just one first down on the two possessions and Lance nearly threw an interception to Rashad Fenton.

Lance finished 5 of 14 for 128 yards and the one TD and didn't run the ball once despite excelling at that in college at North Dakota State.

Garoppolo went 3 for 3 for 26 yards on his one drive that ended in a punt.

Kansas City took a different approach, with only one starter held out in linebacker Willie Gay.

Chiefs LB Darius Harris left with a hand injury and didn't return. ... Niners rookie Aaron Banks left with an injured shoulder. ... San Francisco rookie RB Elijah Mitchell didn't dress for the game because of a hip injury that will likely sideline him for a couple of weeks.

Patrick Mahomes played one series behind Kansas City's overhauled offensive line that features five new starters from last season, including three players who have never suited up for an NFL game.

Mahomes took part in four plays, handing off twice, completing a short pass to Travis Kelce and then a third-down incompletion to Mecole Hardman that led to a punt.

49ers: The Niners head to Los Angeles for two joint practices against the Chargers before their exhibition game next Sunday.