The Latest: Bruins' Grzelcyk taken to hospital after hit 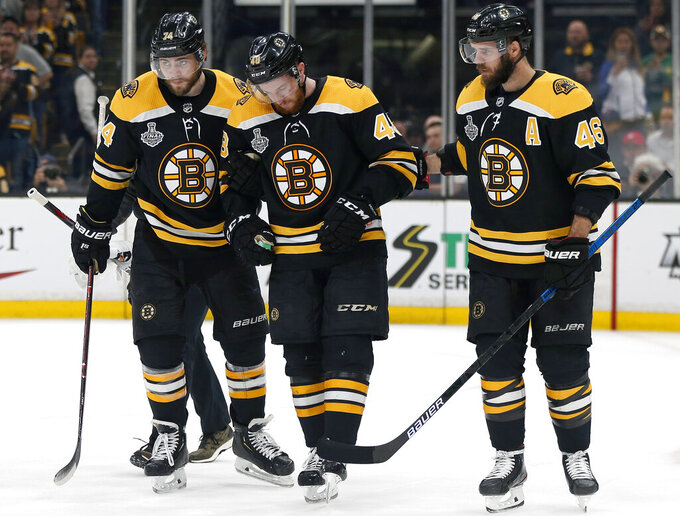 Boston Bruins' Matt Grzelcyk, center, is assisted from the ice by Jake DeBrusk, left, and David Krejci, right, after an injury during the first period in Game 2 of the NHL hockey Stanley Cup Final against the St. Louis Blues, Wednesday, May 29, 2019, in Boston. (AP Photo/Michael Dwyer)

BOSTON (AP) — The Latest from Game 2 of the Stanley Cup Final between the St. Louis Blues and the Boston Bruins (all times Eastern):

Boston Bruins coach Bruce Cassidy says defenseman Matt Grzelcyk was taken to a hospital after taking a hit to the head late in the first period of their Game 2 loss in the Stanley Cup Final.

St. Louis forward Oskar Sundqvist was sent off for boarding after he smashed Grzelcyk into the glass. The defenseman remained on the ice for some time and needed assistance from teammates to get off the ice and into the dressing room.

There was no indication from the team if he will be able to play in Game 3 on Saturday night or in the rest of the best-of-seven series that is tied 1-1.

Carl Gunnarsson's goal in overtime gave the Blues a 3-2 win after Boston won the opener 4.2.

Carl Gunnarsson has given the St. Louis Blues their first win in Stanley Cup Final history.

He blasted a shot past Boston goaltender Tuukka Rask with 3:51 gone in overtime to give the Blues a 3-2 win over Boston. The series is tied at 1-1 with Game 3 in St. Louis coming up on Saturday night.

It's the first Cup Final win in franchise history for the Blues, who were swept in each of their three consecutive appearances from 1968-1970.

This was another resilient showing for the Blues, who coughed up a two-goal lead and put only 20 shots on net in a flat 4-2 loss in Game 1.

All four regulation goals came in the first period. Defensive-minded defenseman Robert Bortuzzo scored his second of the playoffs and Vladimir Tarasenko added his 10th to show St. Louis would have a response after a strong start by the Bruins.

Game 2 of the Stanley Cup Final is going to overtime.

The St. Louis Blues are tied 2-2 with the Bruins after three bruising periods in Boston. It is the first Cup Final game to go to OT since 2016.

The Blues have outshot the Bruins 33-23, and Boston goaltender Tuukka Rask has 31 saves in another stellar performance. He has to thank the post, too, after Carl Gunnarsson clanked what could've been the game-winner off the iron behind Rask in the final minutes of the third period.

The Boston Bruins and St. Louis Blues are tied at 2 going into the third period of Game 2 of the Stanley Cup Final.

This is much different than Game 1, though. The Blues' 24 shots through 40 minutes is four more than they had in all of Game 1, which they lost 4-2.

Boston has 14 shots, including only one total on four power plays. There have already been six penalties called in a game with plenty of rough play.

The Blues have outhit the Bruins 33-19 so far. Boston defenseman Matt Grzelcyk has not returned after a big hit from Oskar Sundqvist while the Blues' Tyler Bozak took a stick to the face, resulting in a four-minute power play while Connor Clifton went to the box.

Vladimir Tarasenko is back for the St. Louis Blues.

Tarasenko went down the tunnel from the bench to the locker room early in the second period and missed several shifts. He returned to the bench midway through the period and took a twirl at the under-10 minute timeout.

He was back on the ice for the next faceoff in a 2-2 game.

Boston defenseman Matt Grzelcyk has not returned after a big hit from Oskar Sundqvist.

Boston defenseman Matt Grzelcyk has not returned at the start of the second period after taking a hit to the head from St. Louis forward Oskar Sundqvist late in the first.

Grzelcyk was down in the corner for a while and needed assistance from teammates to get off the ice. Sundqvist was given a minor penalty for boarding, and St. Louis killed off the power play.

The game was tied 2-2 entering the second period. Boston holds a 1-0 lead in the best-of-seven series.

Game 2 of the Stanley Cup Final is all tied up at 2-2 after a hard-hitting first period between Boston and St. Louis.

Joakim Nordstrom scored just 40 seconds after Robert Bortuzzo's goal to give Boston a 2-1 lead, but the Blues answered quickly. Vladimir Tarasenko took advantage of a mistake by Brad Marchand and lifted the puck over Tuukka Rask with a second effort to tie the score again at 2.

There have been plenty of hits. The Blues' Oskar Sundqvist took a boarding penalty for a hit that knocked defenseman Matt Grzelcyk out of the game. The Blues managed to kill off the Bruins power play.

A flurry of early goals in Game 2 of the Stanley Cup Final.

Robert Bortuzzo scored for St. Louis to knot the game at 1-1 but Joakim Nordstrom answered just 40 second later to give Boston a 2-1 lead at 10:17 of the first period.

Nordstrom was left alone in front of the net after a Blues turnover and slid the puck past goaltender Jordan Binnington, who has now allowed five goals on 43 shots so far in the final.

Six players have scored for the Bruins so far in the series as they seek a 2-0 lead.

Boston has grabbed an early 1-0 lead in Game 2 of the Stanley Cup Final against St. Louis.

The Bruins cashed in a power-play opportunity. Another penalty on the undisciplined Blues —goaltender interference on Sammy Blais — paved the way for a goal by Charlie Coyle 3:55 into the game and 49 seconds into the power play.

Game 2 of the Stanley Cup Final is underway. Boston Bruins coach Bruce Cassidy is content to go power vs. power with the St. Louis Blues.

The Bruins are hoping to take a 2-0 lead to St. Louis for Game 3 on Saturday night.

New England Patriots coach Bill Belichick is the surprise pregame flag bearer prior to Game 2 of the Stanley Cup Final.

There had been buzz throughout the day at TD Garden that a member of the Super Bowl champion Patriots would fire up the crowd before the Boston Bruins look to take a 2-0 series lead on the St. Louis Blues.

Members of the 2011 Stanley Cup winning Bruins had the honor in Game 1.

Robby Fabbri looks to be in the St. Louis Blues' lineup for Game 2 of the Stanley Cup Final in Boston.

Fabbri took line rushes in warmups with Pat Maroon and Tyler Bozak in the spot previously filled by Robert Thomas, who's out with an undisclosed injury.

Fabbri hasn't played since May 3. St. Louis coach Craig Berube said he decided to take Thomas out of the lineup because he is banged up and his absence was not related to the open-ice hit he took from Torey Krug in a Game 1 loss Monday.

The Bruins look to have the same lineup from the opener.

The St. Louis Blues will be without injured forward Robert Thomas in Game 2 of the Stanley Cup Final against the Boston Bruins.

Thomas has been dealing with an undisclosed injury and not participating in most practices and morning skates. Coach Craig Berube says Thomas has been banged up and his absence is not related to the open-ice hit he took from Torey Krug in a Game 1 loss Monday.

Berube said he decided to take Thomas out of the lineup because he is banged up. It could mean Robby Fabbri will see his first game action since Game 5 of the second round against Dallas on May 3.

Blues defenseman Vince Dunn will miss his fifth consecutive game after taking a puck to the face on shot from San Jose's Brenden Dillon in the Western Conference final.