Lawrence 'disappointed in myself' as struggles continue 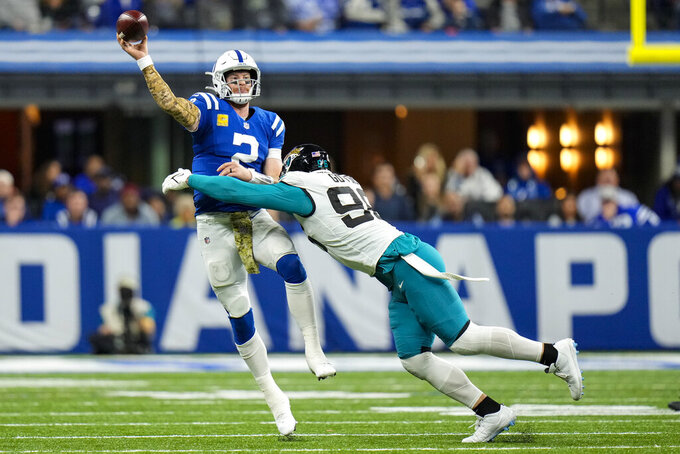 Indianapolis Colts quarterback Carson Wentz (2) is hit by Jacksonville Jaguars defensive end Adam Gotsis (96) as he throws in the second half of an NFL football game in Indianapolis, Sunday, Nov. 14, 2021. (AP Photo/AJ Mast)

JACKSONVILLE, Fla. (AP) — Trevor Lawrence has never endured anything close to this. The No. 1 overall draft pick is going through a stretch of offensive dysfunction that’s left him looking little like a generational quarterback.

Although Lawrence has been plagued by dropped passes and penalties – none of them his fault – the former Clemson star has failed to pick up the slack for Jacksonville’s suddenly inept offense.

And his numbers reflect the team’s struggles.

Lawrence has completed 54.8% of his passes for 518 yards, with one touchdown, one interception and a key fumble in his last three games. The Jaguars (2-7) remain last in the league in third-down conversions (30.3%), with that number dropping after moving the chains 11 times in 42 attempts the last three weeks.

Jacksonville’s defense has been solid enough to give Lawrence chances to win the last two games. He missed several opportunities to put away Buffalo last week – the defense ultimately handled it – and fumbled trying to mount a winning drive in a 23-17 loss at Indianapolis on Sunday.

“That just stings when you end the game that way,” Lawrence said. “I’m disappointed in myself, frustrated, but I know how far we’ve come. … We have a locker room full of guys, coaches and players, that believe, and we’re on the right track.

“But this one hurts just because I’m frustrated with myself. I had a chance to go win the game and have to do that. I had no doubt we were going to win the game. The whole offense believed it. Just have to finish.”

Jacksonville’s biggest issue on offense is a lack of playmakers. Running back James Robinson doesn’t have breakaway speed, and the team’s top three receivers are 31-year-old Marvin Jones, converted cornerback Jamal Agnew, and second-year pro Laviska Shenault, who’s more apt at running over defenders than by them.

Drops have been a problem all season. Agnew had two Sunday, and Robinson, Shenault and Dan Arnold each had one. Arnold and fellow tight end Chris Manhertz also were flagged for half of the team’s eight penalties.

Despite allowing Jonathan Taylor to gain 54 yards on two runs in the first quarter, Jacksonville’s defense was stout for the third straight week. The Jaguars allowed 229 yards at Seattle, 301 against Buffalo and 295 at Indy.

That’s a huge turnaround for a unit that gave up an average of 412.2 yards in its first six games.

Logan Cooke had a punt blocked for a touchdown to end the team's opening drive, putting the Jaguars in a 10-0 hole early. And Matthew Wright missed an extra point and a 51-yard field goal in a six-point game. He also failed to get any of his kickoffs to the end zone for the second straight week.

Jacksonville’s D-line has quickly become the team’s best unit. Coming off its best performance in years, the front was stout again against the Colts.

Wright is clearly not Jacksonville’s long-term solution at kicker. Since hitting two 50-plus-yard field goals in the final minutes to beat Miami in London, Wright has missed an extra point and two field goals. He also has failed to get a touchback on nine kickoffs.

He missed three times – all left – in a span of minutes last week against Buffalo, although only one officially counted. He missed from 42, then from 47 after a penalty and again from 42 after another penalty.

Meyer hopes starting center Brandon Linder (knee/ankle) will return this week. Linder, who remains on injured reserve, was cleared to work on the side during practice last week. Backup linebacker Dakota Allen is dealing with a shoulder injury.

13 – consecutive games Jacksonville has lost to NFC teams. The Jags’ last victory against someone from the other conference came in the 2018 season opener against the New York Giants.

The Jaguars have winnable home games the next two weeks against San Francisco (3-5 heading into its Monday night game against the Rams) and Atlanta (4-5).