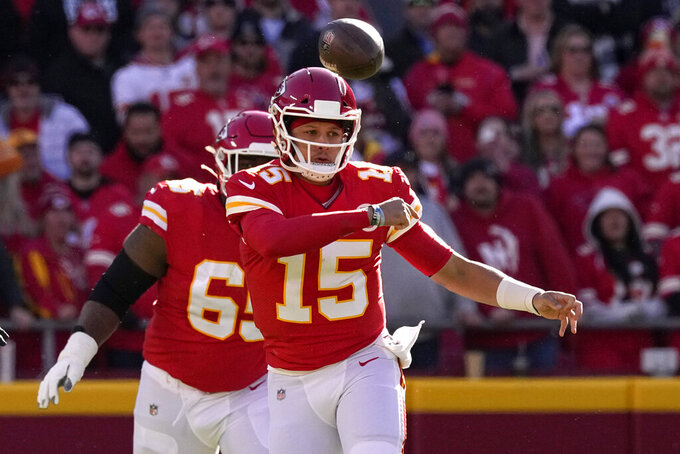 LOS ANGELES (AP) — The first two meetings between Patrick Mahomes and Justin Herbert have come down to the final minute.

With playoff positioning up for grabs, the same thing is expected Thursday night when the Kansas City Chiefs visit the Los Angeles Chargers.

The two-time defending AFC champion Chiefs (9-4) have won six straight since a 3-4 start to vault back into the division lead.

One of those losses was to the Chargers on Sept. 26 when Herbert threw a 4-yard touchdown pass to Mike Williams with 32 seconds remaining as Los Angeles rallied for a 30-24 victory.

The Chargers (8-5) come in with wins in two straight games for the first time since October and can move into first place in the AFC West with a victory by virtue of sweeping the season series.

“Our focus isn't on what's at stake. It's on our opponent. We know the challenge that is in front of us and how we need to play this game,” Chargers coach Brandon Staley said.

Kansas City committed four turnovers in the first meeting that led to 21 Los Angeles points, but Mahomes and company have been rolling since overcoming their early season struggles.

“I think we could continue to play better and better. You want to keep building as the season goes on," said Mahomes, who is fifth in the league with 3,642 passing yards.

"I think defense is playing really good right now and the offense is — some games are great and some game just average so for us it’s going to be us going into play a good defense that we’re playing on Thursday and playing our best football."

While Herbert has six touchdowns and only one interception in wins over the Cincinnati Bengals and New York Giants, the defense has started to find its footing with eight sacks, six takeaways and forcing seven three-and-out possessions the past two weeks.

“We’re facing a really good Chiefs team on Thursday, so it’s going to take all of us," said Herbert, fourth in the league in passing yards with 3,822. "As long as we keep building, we keep getting better, I think we can play some pretty good football.”

Both teams have key players out because of COVID-19.

Slater, the 13th overall pick in April's draft, has allowed 17 quarterback pressures according to Pro Football Focus, which is 15th fewest among starting offensive tackles. Trey Pipkins III, who will get the start in Slater's place, allowed 17 pressures in nine games last season.

“Obviously, it’s really tough to lose a guy like Rashawn, I know he’s an incredible player, but you can’t worry about that because the Chiefs don’t care whether he’s out there or not,” Herbert said. “Trey is a veteran guy that really gets it. So when he goes out there, we feel comfortable with him.”

Gordon has been a bit player in the Chiefs offense, but Jones is perhaps their best pass rusher, putting more pressure on defensive ends Frank Clark and Melvin Ingram. Nick Bolton and Ben Niemann should get most of Gay’s snaps.

“Probably the only guy you can compare him to is Aaron Donald,” Chiefs safety Tyrann Mathieu said of Jones. “You’re talking about inside dominance. It’s going to be a big challenge to replace him but we’re healthier than ever defensively.”

Chiefs CB L’Jarius Sneed is out again after returning to the team Tuesday. He’d been away since last Friday, when his brother was stabbed to death in his native Louisiana. Sneed has become an indispensable part of the Kansas City defense, playing more snaps than anyone else through 12 games and providing so much-needed juice.

“Obviously he’s hurting from the situation,” Chiefs coach Andy Reid said. “He was very close to his brother. But like I’ve said, he’s on his way back and I think it’ll be good for him to be around his teammates. They care a lot about him.”

Herbert is 7 of 11 with two touchdowns on deep passes (in the air at least 20 yards) over the past two weeks, but he has struggled against the Chiefs. He is 2 of 9 on deep balls in his matchups against Kansas City.

Kansas City has allowed only 18 completions on deep passes this season, which is tied for 10th-best in the league.

Chargers running back Austin Ekeler, who has 16 scrimmage touchdowns this season and has reached the end zone in five straight games.

Ekeler is listed as questionable on the injury report, but is expected to be in the lineup after missing most of the second half of last week's game because of an ankle injury. Ekeler is averaging 108.8 yards from scrimmage in his past six games against the Chiefs.

CHIEFS OF THE ROAD

Kansas City is 18-3 on the road since 2019, which is the best mark in the league over the past three seasons.

Meanwhile the Chargers have struggled inside their Hollywood Park home. They are 8-7 at SoFi Stadium since moving in with the Los Angeles Rams at the start of the 2020 season.