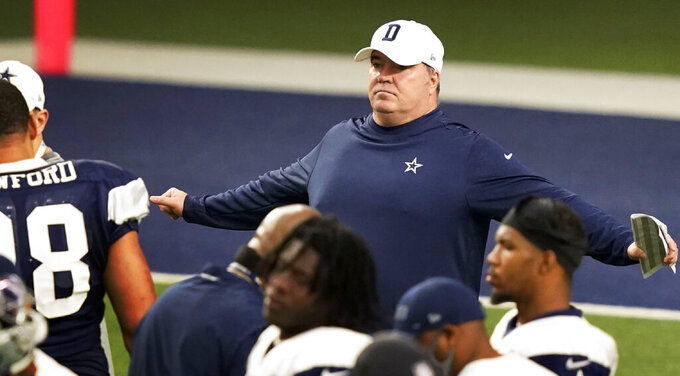 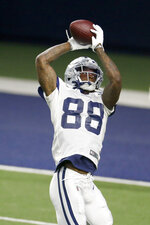 FRISCO, Texas (AP) — Mike McCarthy never budged when asked about the pandemic disrupting his first offseason as coach of the Dallas Cowboys, preferring to emphasize challenges around the world over the difficulties of trying to implement his program.

The former Green Bay coach was even more direct when asked how the coronavirus might alter expectations for a club that fell flat amid high hopes last year, leading to his arrival when Jason Garrett's contract wasn't renewed.

“If you’re not trying to win a Super Bowl, I don’t know what you’re even doing in this business,” McCarthy said. “The ones that don’t talk about it are probably trying to underpromise, overachieve.

“But I’ve always been very upfront about it with every team I’ve ever coached. We’re in this to win a championship. Make no bones about it.”

Ten years after winning a Super Bowl with Aaron Rodgers and the Packers at the home of the Cowboys, McCarthy will try to help Dallas get past the divisional round for the first time since the last of five Super Bowl titles 25 years ago.

Dak Prescott is coming off his best season statistically (4,902 yards passing, 30 touchdowns) but worst record (8-8), while Ezekiel Elliott just played a full season without winning a rushing title for the first time.

Owner Jerry Jones avoids Super Bowl-or-else chatter better than he used to, but he's talking much the same way he did a year ago, when the Cowboys faded after a 3-0 start and missed the playoffs.

“I do see a talented group of players here,” Jones said on his radio show. “I do see the right mix of the younger players and some experience. We’ve added some real talent with the draft and, frankly, in the offseason. So, I think that is going to actually be as good as I can remember when we brought talent to the field.”

The 2016 NFL Offensive Rookie of the Year, a starter from the first snap of his first season, didn't get the long-term contract he wanted in the offseason. He will play on the $31 million franchise tag, possibly the first of two straight years with that approach. Prescott got his first playoff victory two years ago. Now he looks for a deeper run.

“My fire is burning and my fire is big," Prescott said. “You can throw whatever you want in there for it to burn and for it to get bigger. I don’t know if I’m necessarily trying to prove something to the Cowboys or to this team, because I feel like everybody in this building, this organization knows the player I am, knows the man that I am, knows where my heart stands. I just want to be great.”

Elliott is the NFL leader in yards rushing since entering the league with Prescott in 2016 — by a margin of more than 1,000 yards. It speaks to his productivity and durability that finishing fourth with 1,357 yards would be considered substandard. That's what happened in 2019.

“Every year I’ve got a chip on my shoulder,” said Elliott, who sounded off on social media over one analyst ranking him outside the top 10 among NFL running backs. Elliott tested positive for the coronavirus in the offseason but recovered.

If training camp is any indication, Leighton Vander Esch and Jaylon Smith will be the only two linebackers on the field most of the time. With Vander Esch saying he's fully recovered from neck surgery and Smith another year removed from a devastating college knee injury, this figures to be an important season for both.

They're also switching spots, with Vander Esch taking over in the middle and Smith moving to the weak side, where he generally was at Notre Dame.

The Cowboys tried to upgrade the interior of the defensive line as well, signing Dontari Poe and Gerald McCoy before McCoy was lost for the season because of a leg injury sustained in training camp. Tyrone Crawford, who has moved inside and out often in an eight-year career, figures to play inside again because of McCoy's injury.

Jones said the Cowboys plan to play all eight home games with fans, although the club hasn't announced anything specific. Texas Gov. Greg Abbott is allowing stadiums to fill 50% of capacity at the moment. Official capacity of AT&T Stadium is about 80,000.

“I’m confident that we’ve got a very educated situation and that our fans can come and have a safe experience at our stadium, along with of course our players having the safety they’re required on the football field,” Jones said.

The Cowboys also know they'll play their opener without fans in the first game at the new home of the Los Angeles Rams on Sept. 13.