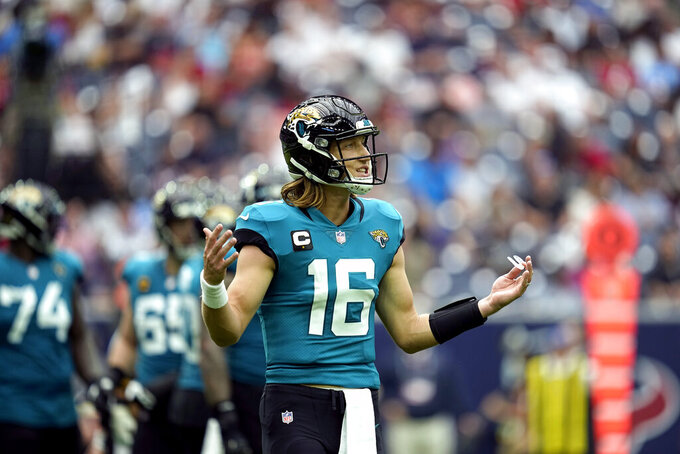 Jacksonville Jaguars quarterback Trevor Lawrence (16) reacts after a penalty called against the offense during the first half of an NFL football game against the Houston Texans Sunday, Sept. 12, 2021, in Houston. (AP Photo/Sam Craft)

HOUSTON (AP) — With new coach Urban Meyer’s championship college resume and No. 1 overall pick Trevor Lawrence leading the offense, the Jacksonville Jaguars were supposed to be much-improved this season.

Instead, the team that won just one game last year looked just as bad — if not worse — as it did last season in a 37-21 loss to the Houston Texans on Sunday.

“We’re still a work in progress,” said Meyer, who won three national titles as a college coach. “I didn’t anticipate that today.”

Lawrence, the former Clemson standout, became the first rookie quarterback to start an opener in franchise history. It was a bumpy debut during which he threw for 332 yards and three touchdowns but also tossed three interceptions, often overthrew open receivers and was the victim of several drops.

“Losing is always hard, especially when you feel like you are prepared and had a great week," Lawrence said. “I really think we were ready and obviously didn’t play well. It starts with me. I didn’t play well, for sure.

Lawrence added that it was the first time he'd thrown three interceptions in a game at any level of football.

But Meyer said the blame shouldn't fall to Lawrence alone.

Sunday was the first time Meyer lost a season opener as a head coach after entering the game having won 17 straight openers as a college coach.

He brushed off a question about how tough Sunday’s loss was for him.

“I hear that a lot and I’d rather people not worry about me, a gray-haired dude that’s been around for a long time,” he said. “I’ve got a bunch of players in there that deserve to win and worked their tails off.”

The Texans built a 14-0 lead before Lawrence put together a nice drive and capped it with a 22-yard touchdown pass to Chris Manhertz to cut the lead to 7 early in the second quarter.

Meyer recalled his thoughts after that touchdown.

The Texans led 17-7 later in the second when Lawrence was intercepted by Justin Reid. But Houston couldn’t move the ball and had to punt four plays later.

Jacksonville’s next drive was a mess, with a penalty for having 12 men on the field on second down before Lawrence was picked off again. Vernon Hargreaves ran the interception back 18 yards to give Houston the ball at the Jacksonville 7.

Meyer was most disappointed in his team’s 10 penalties.

“It’s inexcusable,” he said. “Three preseason games, you’d think we’d have that fixed. So that’s something that I would guesstimate you wouldn’t see again.”

The Texans cashed in on the miscue with a 26-yard field goal to extend the lead to 20-7 with about a minute left in the first half.

Houston tacked on another touchdown before halftime and with such a huge deficit in the second half the Jaguars had to all but abandon the run as they tried to catch up.

While certainly disappointed by his team’s poor showing in the opener, Meyer, who never lost more than two games in a season in seven years at Ohio State, is confident his team will bounce back from the loss.

Defensive lineman Josh Allen was quick to point out this was just one game in what is a long season and they can't dwell on it.

“This didn’t define us, because we lost," he said. “This is a bad feeling ... and we’ve got to get better. We are all grown men. We’re going to look at this. We’re going to get the corrections. And we’re going to move on."