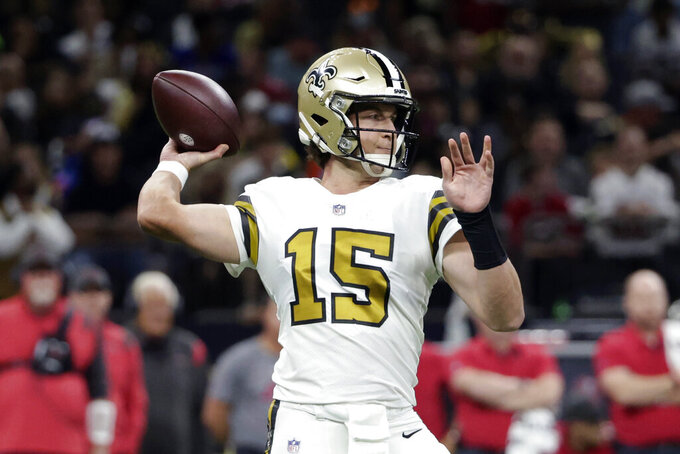 Only one team consistently confounded Tom Brady during his two-decade rule in the AFC: the Denver Broncos.

They were the only team that had a winning record against him while he was winning six rings with the Patriots, going 9-8 against Brady. Mike Shanahan is the only head coach to beat him five times, and Denver took three of four from Brady in the playoffs, twice in the AFC championship behind Peyton Manning.

Brady's new kryptonite in the NFC is the New Orleans Saints.

They beat him for the third time in four tries Sunday when Dennis Allen dialed up a defense that denied Brady another of his patented game-winning drives in the closing minutes and deked him into throwing an interception that P.J. Williams turned into a pick-six that sealed the Saints' 36-27 victory.

“I just threw it to the wrong guy,” said Brady, who also had two second-quarter turnovers that New Orleans converted into nine points. “I had Mike (Evans) open. It cost us the game.”

That left Brady with a minute, 41 seconds and one timeout to get the Bucs into position for a field goal and his 51st career comeback.

So many times we've seen Brady chew up the clock and the yards on his way to leading his team to victory in these situations.

His first pass, to Evans, fell incomplete. His second, to Chris Godwin, was picked off by Williams, who returned 40 yards down the sideline for the touchdown.

“He telegraphed it a little bit,” groaned Bucs coach Bruce Arians. “And the DB made a helluva play.”

Sean Payton ran up to Allen to celebrate another masterful game plan that stifled Brady, who threw for 375 yards and four touchdowns, but also committed a trio of turnovers that the Saints converted into 16 points.

“It’s tough to win when you turn the ball over like we did,” Brady said. “So, I have to not throw interceptions. That’s the key.”

Ever since bolting the New England snow and shovels for Florida's sand and sunshine, Brady has been unable to solve the Saints defense, save for his divisional playoff win last season when Drew Brees was tottering toward retirement.

Since Brady's arrival, the Buccaneers have had just three games out of 28 in which they've had five or more combined sacks and turnovers, and all three have come against the Saints, who sacked Brady three times Sunday.

Including the playoffs, Brady has thrown 67 touchdown passes with just 13 interceptions against all other teams, but against the Saints he has just eight TD throws and seven interceptions.

He's 20-4 against all other opponents, 1-3 against the Saints, who have found a way to mix talent and technique with timing and scheming to make Brady look mortal, forcing him into the kinds of bad throws that only the Broncos used to be able to do, back when they jockeyed with the Patriots for AFC supremacy.

The Saints' victory kept the Bucs (6-2) from getting too far ahead of them in the NFC South race, where they're just a half-game back.

The victory could prove costly, however, with Winston's left knee injury interrupting a promising second chapter of his career.

The Saints could try to get some help at Tuesday's trade deadline, turn to Taysom Hill, who went 3-1 in four starts last season but is recovering from a Week 5 concussion, or stick with Siemian.

The experienced backup, who succeeded Manning and started for Denver in 2016-17, took over for Winston and completed 16 of 29 passes for 159 yards and a touchdown without an interception, leading the Saints on five scoring drives that produced two TDs and three field goals.

Siemian, who last took a meaningful snap in Week 2 of the 2019 season with the Jets, said he’d “kind of lost a little bit a sense of how fun it is.”

“There’s a joy to this game,” Siemian said. “There’s nothing better than to see your teammates make plays and you’re moving the ball and it’s the best.”

Siemian wasn't the only backup who experienced those emotions in Week 8. So did two backups making their first NFL starts.

Cooper Rush subbed for the injured Dak Prescott and passed for 325 yards and two second-half touchdowns, the last a 5-yarder to Amari Cooper with 51 seconds left in the Cowboys’ 20-16 victory over the Vikings on Sunday night.

And Mike White subbed for injured starter Zach Wilson and led the Jets to a stunning 34-31 comeback victory over the Cincinnati Bengals by going 37 of 45 for 405 yards and three touchdowns.

He set an NFL record for most completions in a player's first start, caught a 2-point conversion and became the first player since 1950 to throw for 400 yards and three TDs in his first career start.

Rush is a fifth-year backup who was handed the offense when Prescott was shelved in a game-time decision because of a strained right calf muscle. Trailing 16-13 with 2:51 remaining, Rush directed an eight-play, 75-yard drive he finished with a perfect toss to Cooper on a fade in the corner of the end zone in the final minute.

According to NFL research, Rush became the first player to pass for 300-plus yards and win in his first career start on the road in a night game since Gary Hogeboom did it for Dallas in the 1984 season opener.

“I was glad everybody got to see that, because that’s Cooper Rush,” Cowboys coach Mike McCarthy said. “He plays the quarterback position like a seasoned veteran.”