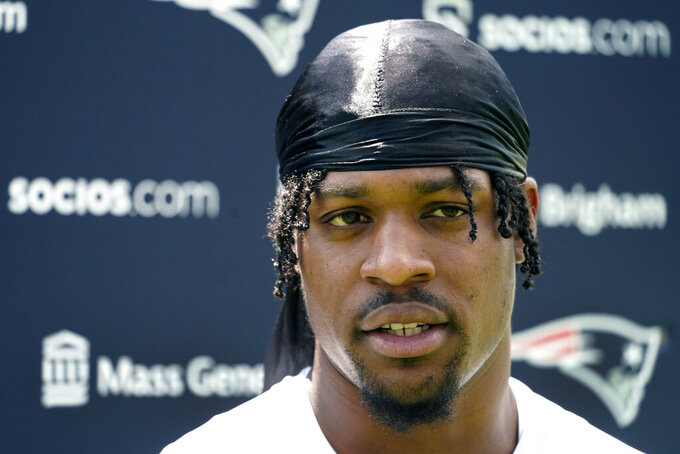 FOXBOROUGH, Mass. (AP) — Mac Jones is amazed at how Cam Newton can bring instant levity to the meeting room. Though he’s sure he could never pull off the veteran’s often unique clothing choices.

Newton is equally taken aback by how much “swag” his clean-cut 22-year-old rookie teammate has displayed and his surprising knowledge of hip-hop music.

“Cool as the other side of the pillow,” Newton said with a smile Friday.

It’s all part of a budding friendship between the two and rare detente between alums of the bitter Auburn and Alabama college football rivalry: Newton led Auburn to a national title in 2010 and Jones did it with the Crimson Tide a decade later.

It has also ratcheted up expectations as they build their bond now as teammates and compete to be the Patriots’ Week One starter this season.

“It’s still a learning process. And I told Mac this yesterday. He doesn’t know me yet, I don’t know him yet,” Newton said Friday. “I’ve been around Brian (Hoyer) long enough for him to know how to get me going. Obviously, Stiddy (Jarrett Stidham). So just a couple months with Mac, he’s a person that over time you’ll get to understand and know.”

Through three days of training camp both have had their highlights on the field.

Newton looks surer of his decision making in his second season in Patriots offensive coordinator Josh McDaniels’ system. And Jones has already shown glimpses of the fast-delivering, confident and pinpoint passer he was in college.

While he’s trying his best to be himself, Jones says he already sees a lot in Cam’s approach that he wants to emulate.

“Obviously, with any relationship and meeting someone new, regardless of position or whether he’s a teammate or not, you have to form the bond and the trust,” Jones said. “The first couple of practices as a rookie are going to be hard. So, he just tries to stay positive with me, and that’s just who Cam is."

It’s the kind of acclimation to the NFL that Newton said he remembers well.

“As a young player, man, you know what your expectations are, and you know you’re better than what you’re producing,” Newton said. “And it still happens with me. It doesn’t matter if you’re 11 years in, one year in, 14 years in. For us, it’s knowing that we have a standard we have to meet each and every day.”

Receiver Jakobi Meyers said he already sees a lot to like about Jones and can see how Newton’s command of the offense has taken a leap.

Meyers said he isn’t concentrating as much on who will win the job as learning the different nuances each brings to the huddle.

"Two different styles of quarterback,” Meyers said. “Just coming out, getting as many reps with them as I can. Off the field, on the field. Picking their brains when they’re talking, just seeing how they see things and their different perspectives, just understanding that. It’s been different, but I’m enjoying the process.”

That process, Newton said, is part of what makes any training camp fun for a quarterback, no matter what stage of your career you’re in. Being pushed by your teammates only adds to that.

“Ever since I’ve been here, there’s been a quarterback competition. I think in essence, that’s the underlying Patriot Way,” Newton said. “Every position has a competition there, and the quarterback position is no different.”

NOTES: It’s been a few weeks since receiver N’Keal Harry’s agent asked the Patriots for a trade, a surprise move by a player whose production has been largely disappointing in his two seasons in New England. But he said Friday there’s been no awkwardness between him and the team since he reported to camp.

“Right now, I’m at a New England Patriots training camp,” Harry said. “I’m just trying to make sure I do everything I can to fit in with this team and do anything I can to help this team get wins.”

Limited by injuries, the 2019 first-round draft pick has appeared in just 21 games, pulling in 45 catches for 414 yards and four touchdowns.

While the Patriots could still trade him before the start of the season, he faces stiff competition for a roster spot following the signings of free agents Nelson Agholor and Kendrick Bourne. Still, Harry said he feels like there’s room for him to make an impact.

“Definitely,” he said. “I feel like we have so many good players on this team, and at some point, at one point or another, we’re going to be able to make a difference. I’m just trying to make sure I can fit in somewhere in there.”