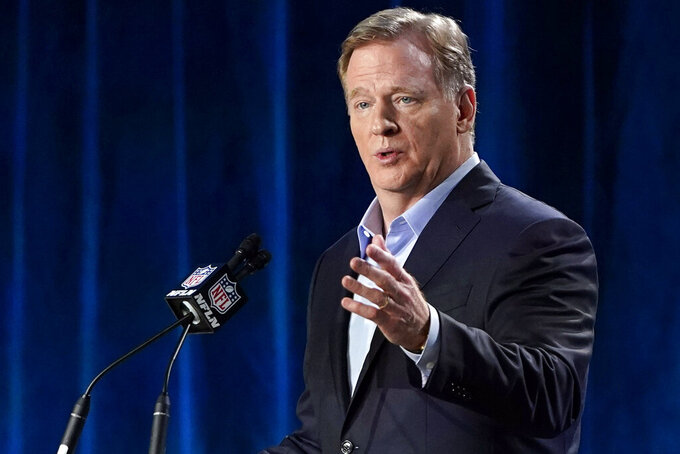 FILE - In this Jan. 29, 2020, file photo, NFL Commissioner Roger Goodell answers a question during a news conference for the NFL Super Bowl 54 football game in Miami. Goodell says the league remains committed to finishing the regular season as scheduled. Goodell also said on a conference call that while the NFL is considering a bubble format for the playoffs, it wouldn’t necessarily resemble what the NHL and NBA used successfully in completing their seasons. (AP Photo/David J. Phillip, File)

NFL owners have delayed a decision on implementing a 17-game regular season for 2021.

During a teleconference call Wednesday that replaced the usual December gathering of owners in Dallas, they opted to push back any move on the expanded season until early in 2021. The NFL and the players' union agreed during collective bargaining talks earlier this year to adding one regular-season game to the schedule, but not before next season.

“We had a lengthy discussion on this, obviously it's an important decision for us,” Commissioner Roger Goodell said. “We did not take any votes with respect to committing to do it. In the collective bargaining agreement, we have that right to do it.”

A scheduling formula for a 17th game was approved unanimously: an interconference matchup, based on divisional standings from the preceding season, and on a rotating divisional basis. The idea is to maintain facilitating competitive fairness; creating additional value through quality matchups; and preserving the objectivity of the scheduling process, the league said.

“It obviously comes into play with respect with our future media arrangements that we obviously are contemplating,” he added. “We expect a decision will be made on that in the next several weeks.”

The length of the preseason would be reduced, as well, if a 17th match is added.

Goodell said the league plans to invite vaccinated health care workers to the Super Bowl as guests. No set number of invitees has been determined for the Feb. 7 game in Tampa.

In a letter to Rob Higgins, president of the host committee for Super Bowl 55, that was obtained by The Associated Press, Goodell wrote that he wanted to “honor and thank health care workers for their extraordinary service during pandemic” as well as promote the importance of vaccinations and the wearing of masks in public.

Goodell added in the letter: “We all know that over the past year, these frontline workers have put their own lives at risk to the benefit of society and we owe them our ongoing gratitude. We also know that they will remain essential for months to come to treat those who are ill and administer vaccines. We hope that in some small way, this initiative will inspire our country and recognize these true American heroes as we look forward to a better and healthier year.”

The NFL plans for fans to attend the game.

“We have not landed on a specific capacity yet, and we will work on that with the medical community in the weeks ahead,” said Peter O'Reilly, who oversees major event planning for the league. “Public health officials will drive every decision we make around this subject.”

Goodell attended the Buccaneers' victory over Minnesota on Sunday and “was incredibly impressed by the stadium and improvements they made. We are looking forward to one of the most memorable and meaningful games in our history.”

The commissioner acknowledged that playing through the pandemic has provided plenty of lessons, and the NFL will confer with the NFL Players Association after the Super Bowl to discuss 2020 measures that might make sense to keep in a post-COVID-19 landscape.

“This has been a period of learning. I think it’s forced us to think differently and innovate and we’ll look at that and see how we implement it going forward,” Goodell said.

The owners also approved the Tennessee Titans realigning ownership, with Amy Adams Strunk remaining the primary owner. Goodell said the matter should be completed by the end of December.

“I think it strengthens our ownership in a way that is very positive,” Goodell said.