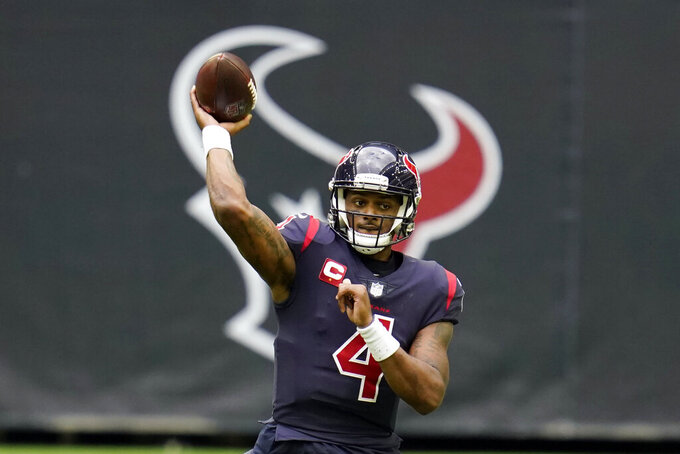 FILE - In this Dec. 27, 2020, file photo, Houston Texans quarterback Deshaun Watson throws a pass during an NFL football game against the Cincinnati Bengals in Houston. New Houston Texans coach David Culley reiterated Thursday, March 11, 2021, that the team has no intention of trading Watson, despite the star quarterbackâ€™s request to be dealt. (AP Photo/Matt Patterson, File)

In lawsuits filed this week, two of the women claim that Watson touched them with his penis during massages last year, and the third alleges he forced her to perform oral sex.

Watson, 25, has broadly denied that he acted inappropriately and said he looks forward to clearing his name.

The women, who are not named in the lawsuits, are represented by Houston lawyer Tony Buzbee, who posted a picture Thursday of a letter from the NFL on his verified Instagram account that said the league had launched an investigation. Buzbee later deleted the post.

NFL spokesman Brian McCarthy confirmed in an email to The Associated Press that the matter was "under review of the personal conduct policy.”

Watson's attorney and agent did not immediately respond to requests for comment Thursday.

“I have never treated any woman with anything other than the utmost respect,” the quarterback said in a statement posted to Twitter Tuesday.

Houston police spokeswoman Jodi Silva declined to comment on whether any of the alleged sexual assaults were reported to police, saying the department does not identify people who have not been charged with a crime.

Buzbee did not immediately respond to requests for comment Thursday, but wrote in one of the lawsuits that “Watson's behavior is part of a disturbing pattern of preying on vulnerable women.”

The letter that he briefly posted was from Lisa M. Friel, special counsel for investigations for the NFL. It said it is her job to “look into any allegations that might involve a violation of the League's Personal Conduct Policy." The letter went on to say that the league had “opened an investigation into these allegations and to request the cooperation of your clients in our investigation."

According to the suits, the women live in Texas, Oregon and Georgia and work giving massages. Two claimed that during massages in March and August of last year Watson was sexually suggestive, exposed his genitals and moved toward them in ways that caused his penis to touch their hands.

The lawsuit from the third woman describes similar behavior and alleges that during a massage in December, Watson ”coerced” her into giving him oral sex. The woman did not consent and then ”blacked out for a few minutes from fear,” the lawsuit states.

The alleged assaults took place at one of the women's homes, a Houston hotel and an office building in the city, according to the suits. They state that Watson connected with the women over social media, where they advertised their businesses, and flew one of them from Atlanta to Houston for a massage.

Each woman is suing for compensatory and punitive damages, as well as court costs.

Texans spokesman Omar Majzoub released a statement on behalf of the team Thursday saying it had been informed by the NFL about its investigation. The statement said the team “will stay in close contact with the league” as it investigates.

“We continue to take this and all matters involving anyone within the Houston Texans organization seriously," the statement continued. “We do not anticipate making any additional statements until the NFL’s investigation concludes.”

Watson is one of the league’s top quarterbacks and led the NFL in yards passing last season. He signed a four-year, $156 million contract extension with the Texans last offseason, but he became unhappy with the direction of the team as Houston sunk to 4-12 and he requested a trade in January.