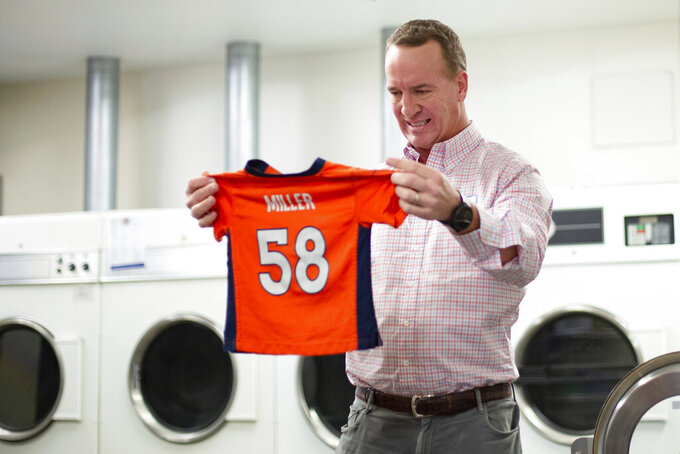 During filming for the Denver Broncos' 2021 schedule release video, former quarterback and current "intern" Peyton Peyton Manning washes a Von Miller jersey at UCHealth Training Center on Tuesday, May 10, 2021 in Englewood, Colo. Schedule release day has become a competition across the NFL between the social media departments of teams to see whose video creates the biggest impression. (Ben Swanson/Denver Broncos via AP)

The biggest day on the NFL calendar for social media departments at the 32 teams isn't a game, the draft or the start of free agency. It is schedule release day.

Much like coaches spend hours game planning, digital departments have spent months planning and shooting videos that will go live when the entire 2022 regular-season schedule is released Thursday night.

Most teams are sparing no expense to come up with unique ways to showcase their upcoming slate.

“Schedule release for us is kind of our Super Bowl in the digital sports club world,” said Derek Eagleton, the Dallas Cowboys' vice president for media and programming.

The Cowboys had one of the league's top videos last year with rapper Post Malone delivering the schedule as “The Postman” to Jerry Jones. It also included cameos from quarterback Dak Prescott and running back Ezekiel Elliott.

Getting the Grammy nominee to participate ended up being an easy task. Post's father is Rich Post, the assistant director of food and beverage for the Cowboys.

The release videos can run the gamut on style. Some go the animation route, others have incorporated brainstorming sessions where they can highlight different ideas. The Kansas City Chiefs opted to have coach Andy Reid discuss looking forward to the challenge of each opponent while the Pittsburgh Steelers used Legos to build their schedule.

In the case of the Denver Broncos, they have been looking at ways to top last year. Their video of Peyton Manning as an intern won a Webby Award in the Sports Social Video category.

“It’s definitely a challenge to kind of come up with creative ideas year after year, especially after we had such a successful one last year,” said Caroline Deisley, the Broncos' senior manager of social media strategy. "It's almost stressful, because as we’re trying to come up with our own idea, you’re wondering what the other 31 teams are going to do and hope that your video tops that.

“Sometimes it's a really high-budget, heavily produced video that looks really cool. Or it’s more kind of like what we did last year with Peyton where we spent $2.99 and filmed it in 30 minutes. It was just his comedic timing, and kind of I can’t believe you got Peyton Manning to do this, that led to the success there."

Marc Ganis, the president of sports consulting firm Sportscorp Ltd., said the team productions evolved from them seeing the activity on social media once the schedules were released.

“It grew organically after teams saw how many retweets the schedule would get along with conversations about which games fans were planning on attending or other fan bases talking at each other once the dates were known,” he said. “Now it is one of the tentpole events on the NFL calendar and has been a way for the league to stay in the headlines in May after the draft.”

The Seattle Seahawks had one of the first viral schedule release videos in 2016 when they did “ Making the Schedule. ” The two-minute video showed ingredients being put together to bake cupcakes, followed by cupcakes showing each team.

The competition began to ramp up in 2019 when Atlanta released a “Game of Thrones”-themed video and Carolina did retro video games. Last year, Cleveland was the only team that didn't do a short schedule release video. The Browns opted to do a half-hour special.

“We’ve known and seen how heavily invested clubs are in their content production. They have top equipment and top talent. They’re essentially full production houses,” said Gazelle Rezvan, an account manager for club relations. “It’s not just the best of the NFL, it’s amazing content.”

The videos also are a good way for teams to promote sponsors and ignite ticket sales. Most teams have opted to put single-game seats on sale as soon as the schedule has been released.

Laura Lefton, NFL VP of club business development, said ticket sales for the couple days following the schedule release were up 150% compared to 2019.

While most teams change ideas annually, the Los Angeles Chargers stick to a consistent theme each year — poking fun at their opponents' fan bases. The 2019 schedule video featured stock footage and last year's was edge rusher Joey Bosa leading a PowerPoint presentation that included subtle jabs at each city.

Most see it as good fun. However, the Cleveland Fox TV affiliate sent a care package after the PowerPoint slide went to the Cleveland “Mistake on the Lake” nickname and added there was nothing to do there.

Jason Lavine, Chargers vice president of content and production, said the irreverent brand of humor is one reason the organization won a Webby for one of the best social media accounts,

“Our voice is fun. This organization has embraced fun, and a part of having fun is not only being able to like making fun of yourself, but you got to have fun with others," he said. "We’re never going after teams as much as we’re going after the fan bases and maybe the culture of the city.”

Like others around the league, Lavine is interested in seeing what other teams have up their sleeves this year as well as the reception the Chargers' video will receive.

“I think anyone who works at a team would tell you it's like I think we get a little bit snickered at because we are team media. There’s a simple sense of like, well, they’re lesser in some respects. But we firmly believe that we can compete and create at any level,” he said.