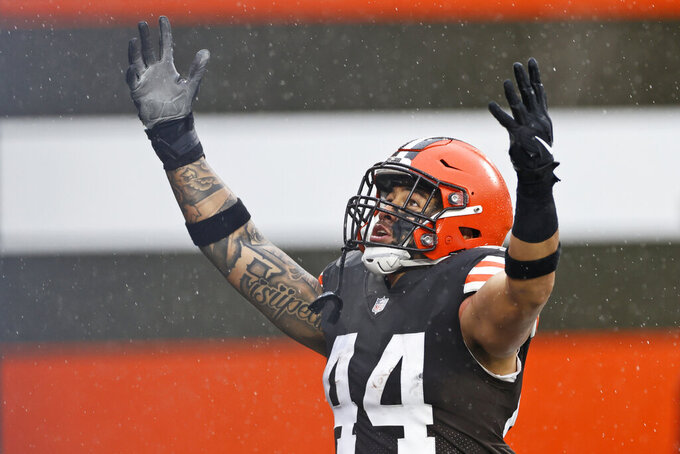 Cleveland Browns linebacker Sione Takitaki celebrates after running for a 50-yard interception return touchdown during the first half of an NFL football game against the Philadelphia Eagles, Sunday, Nov. 22, 2020, in Cleveland. (AP Photo/Ron Schwane)

Los Angeles Rams at Tampa Bay, 8:15 p.m. EST, ESPN — Jared Goff and the Rams (6-3) are making their fifth East Coast trip in nine games, and are 2-2 in those previous games, with losses to playoff contenders Buffalo and Miami. Tampa Bay quarterback Tom Brady is 18-7 in 25 career starts on “Monday Night Football,” including a 25-23 victory for the Buccaneers (7-3) over the New York Giants three weeks ago. Brady has thrown for 23 TDs, two shy of joining Peyton Manning as the only QBs in NFL history to toss 25 or more in 15 seasons.

— Deshaun Watson, Texans, had 344 yards passing and two touchdowns, and also ran for a score in Houston's 27-20 victory over New England.

— Justin Herbert, Chargers, threw for 366 yards and three touchdowns and Los Angeles held on for a 34-28 victory over the winless New York Jets.

— Patrick Mahomes, Chiefs, threw a 22-yard touchdown pass to Travis Kelce with 28 seconds to play and finished with 348 yards passing and two TDs in Kansas City's 35-31 victory over Las Vegas.

— Andy Dalton, Cowboys, returned from a two-game absence to throw three touchdown passes, including hitting Dalton Schultz for a 2-yard score with 1:37 left to lift Dallas over Minnesota and stop the Cowboys’ four-game losing streak.

— Philip Rivers, Colts, was 24 of 35 with 288 yards, three touchdowns and one interception in his 234th consecutive start, helping lift Indianapolis to a 34-31 overtime win over Green Bay.

— Taysom Hill, Saints, rushed for two touchdowns and passed for 233 yards in his first NFL start at quarterback in place of the injured Drew Brees, and New Orleans beat Atlanta 24-9 for their seventh straight victory.

— Dalvin Cook, Vikings, ran for 115 yards and a touchdown on 27 carries in Minnesota's 31-28 loss to Dallas. Ezekiel Elliott, Cowboys, had 103 yards for his first 100-yard rushing game of the season and caught a TD pass.

— Antonio Gibson, Washington, had 94 yards rushing and a touchdown in a 20-9 victory over Cincinnati.

— Keenan Allen, Chargers, caught a franchise-record 16 passes for 145 yards and a touchdown in Los Angeles' 34-28 victory over the New York Jets.

— Adam Thielen, Vikings, had eight receptions for 123 yards and two scores in Minnesota's 31-28 loss to Dallas.

— Rodrigo Blankenship, Colts, kicked a 39-yard field goal with 7:10 remaining in overtime to lead Indianapolis to a 34-31 victory over Green Bay.

— Eric Wilson, Vikings, knocked away an extra point attempt in the first quarter of Minnesota's 31-28 loss to Dallas.

— Sione Takitaki and Olivier Vernon, Browns. Takitaki returned an interception 50 yards for a touchdown in Cleveland's 22-17 win over Philadelphia, and Vernon had three sacks and a safety.

— Terrell Edmunds and Minkah Fitzpatrick, Steelers, each had two interceptions in Pittsburgh's 27-3 victory at Jacksonville.

New Orleans running back Alvin Kamara became the first player in NFL history with at least 500 yards rushing and receiving in each of his first four NFL seasons. Teammate Michael Thomas had his 482nd career catch during the first half of the Saints' 24-9 win over Atlanta, giving him ownership of the record for most catches in an NFL player’s first five seasons. He finished the game with 489 after catching nine passes for 104 yards. ... Justin Herbert set an NFL rookie record with five games of three or more touchdown passes, throwing three in the Los Angeles Chargers' 34-28 win over the winless New York Jets. ... Indianapolis quarterback Philip Rivers made his 234th consecutive start, tying Eli Manning for the 10th-longest streak in league history. ... The Chargers' Keenan Allen set a franchise record with 16 receptions in a 34-28 win over the New York Jets, and tied Antonio Brown as the fastest to reach 600 catches. Both reached the mark in their 96th career game. It is also Allen’s sixth game with 13 or more receptions, the most by a player in NFL history.

New England fell to 4-6 with a 27-20 loss at Houston, marking the first time since 2009 that the Patriots will have at least six defeats in a regular season. ... Pittsburgh extended its sacks streak to 67 consecutive games when Stephon Tuitt got to Jake Luton for a 9-yard loss on a third-and-14 play in the third quarter of the Steelers' 27-3 win at Jacksonville. It was Pittsburgh’s 37th sack of the season, which leads the NFL. ... Green Bay wide receiver Davante Adams had seven receptions for 106 yards and one touchdown in a 34-31 overtime loss to Indianapolis. He became the fourth player in NFL history with at least seven receptions and a touchdown catch in five consecutive games, joining Cris Carter (1999), T.J. Houshmandzadeh (2007) and Adam Thielen (2018).

Cincinnati rookie quarterback Joe Burrow couldn’t put any weight on his left leg as he was helped onto a cart after what appeared to be a serious knee injury in the Bengals’ 20-9 loss Sunday. “Thanks for all the love,” Burrow tweeted. “Can’t get rid of me that easy. See ya next year.” If that’s indeed it for Burrow’s rookie season, the top overall draft pick was 264 of 404 for 2,688 yards and 13 touchdowns in 10 games. He had 203 yards and a TD pass in putting Cincinnati ahead of Washington before getting hurt.

Pittsburgh improved to 10-0 for the first time in franchise history with a 27-3 victory at Jacksonville. The Steelers are the NFL's lone unbeaten team. On the flip side, the New York Jets dropped to 0-10 for the first time with a 34-28 loss at Los Angeles against the Chargers. The Jets, who were officially eliminated from the playoff hunt, are the league's only winless team and are in the running to join the 2017 Cleveland Browns and 2008 Detroit Lions as the only 0-16 teams in NFL history.

Justin Herbert had the best first half by a rookie quarterback since at least 1991 to give the Los Angeles Chargers a 24-6 lead over the New York Jets at halftime, leading to a 34-28 win. Herbert completed 23 of 31 passes for 277 yards and two touchdowns. The completions, attempts and yards are the most by a rookie QB in the last 30 years. His TD passes to Mike Williams and Hunter Henry also extended his streak of multiple touchdown games to seven, which is also a rookie record. Herbert finished with 37 completions, 366 yards passing and three TDs.

Baltimore’s Dez Bryant had four receptions for 28 yards, all in the third quarter of the Ravens' 30-24 overtime loss to Tennessee, his first catches in an NFL game since Dec. 31, 2017, with Dallas. The 32-year-old Bryant closed his career with the Cowboys after the 2017 season, tore his Achilles tendon in 2018 and was inactive last season.

Denver's 20-13 win over Miami not only prevented Dolphins quarterback Tua Tagovailoa from becoming just the second rookie in the past 40 years to win his first four starts, but the Broncos sacked him a half-dozen times and knocked him from the game in the fourth quarter. Although the Dolphins didn’t announce an injury to Tagovailoa before game’s end, the lefty walked gingerly to the sideline after his final sack, by Bradley Chubb. On the play, Tagovailoa’s left leg bent awkwardly and guard Solomon Kindley stepped on Tagovailoa’s right foot. Ryan Fitzpatrick entered with the Dolphins down 10 points and drove them to a field goal that made it a one-score deficit. But his pass into the end zone with 63 seconds left was intercepted by Justin Simmons to seal the loss.

Cincinnati rookie quarterback Joe Burrow had his season apparently ended by a scary knee injury. He was carted off the field early in the third quarter of a 20-9 loss at Washington on Sunday after being hit high and low by Washington linemen Montez Sweat and Jonathan Allen after throwing a pass. ... New England running back Rex Burkhead sustained a knee injury against the Texans and had to be helped off the field in the Patriots' 27-20 loss at Houston. He was later taken to the locker room on a cart. ... Cleveland safety Ronnie Harrison, a major bright spot of late, injured his knee on Philadelphia’s first series and didn’t return to the Browns' 22-17 win. He is scheduled to have an MRI. ... Eagles defensive tackle Fletcher Cox left with an apparent leg injury and cornerback Cre’Von LeBlanc rolled his ankle.

— “It was like he never stopped going up. He jumped and just kept levitating. It was like a Super Mario double bounce.” — Cleveland quarterback Baker Mayfield on teammate Kareem Hunt's leaping 5-yard TD run in the Browns' 22-17 win over Philadelphia, comparing his gravity-defying move to something out of a video game.

— “All I heard was the yelling. He held his knee. You never want to see that. I was hurting, man. I was hurting because I know Joe. I wanted to keep playing against Joe. You just never want to see that happen to anybody.” — Washington's Chase Young on Cincinnati quarterback Joe Burrow, who injured his left leg in the Bengals' 20-9 loss. Young and Burrow were college teammates at Ohio State before the QB transferred to LSU.

— “It’s crazy, because I didn’t envision my first start like this, my mom did. She said, ‘I had a dream you were playing for the Panthers.’ I was like, ‘That’s weird because I’m in Indianapolis.’ But life has come full circle and her dream came true.” — Carolina quarterback P.J. Walker, who made his first NFL start in a 20-0 win over Detroit. Walker spent time in the XFL and also with the Colts 18 months ago.