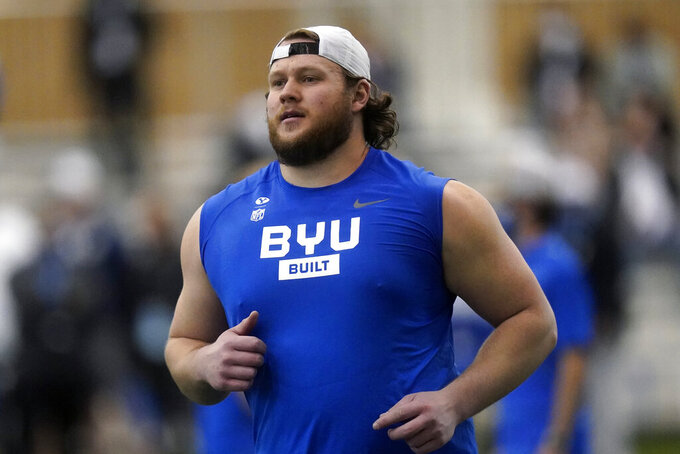 FILE - BYU offensive lineman Brady Christensen runs down field during the school's Pro Day football workout for NFL scouts in Provo, Utah, in this Friday, March 26, 2021, file photo. The Panthers are hoping 24-year Brady Christensen came help solidify the left tackle position that has been a revolving door ever since Jordan Gross retired nearly a decade ago. The third-round pick from BYU is looking to do the same. (AP Photo/Rick Bowmer, File)

CHARLOTTE, N.C. (AP) — The Carolina Panthers have been looking for a player who can protect the quarterback’s blindside for the past eight years.

They think they may have found one in consensus All-American Brady Christensen.

The team’s third-round draft pick from Brigham Young has strong pass-blocking skills and there is optimism he can be the pass protector the team has coveted at left tackle ever since Jordan Gross retired following the 2013 season.

“He comes from that pro-style offense at BYU so he’s done the things that we are asking guys to do,” Panthers coach Matt Rhule said. “He’s been doing it there. He’s a tackle candidate that can also go inside and play guard. Again, a great, great, great athlete. Intelligence, the whole package.”

The Panthers had their eyes on Oregon left tackle Penei Sewell in the first round, but when the Detroit Lions drafted him seventh overall — one spot ahead of them — they pivoted and took South Carolina cornerback Jaycee Horn. Carolina drafted wide receiver Terrace Marshall from LSU in the second round before filling the left tackle spot with Christensen in round three.

Christensen will have to earn a starting job in training camp, which means beating out free agent pickup Cam Erving and Greg Little, a second-round pick by the previous Panthers coaching regime who has struggled to get on the field.

“I think I’m an elite pass protector and I’ll be able to pass protect at a high level,” Christensen said. “Also, the run game there is unbelievable and I’m excited to be able to run block. I feel like I have elite feet. I really can drive guys off the ball."

But he may be outdone at some point by his newborn son, Ledger. Ledger was born on March 16 and was a modest 7 pounds, 13 ounces — with the exception of some really large feet. In fact, Christensen said he and his wife have struggled to find socks big enough to fit the newborn.

“His head was normal, which is crazy, because me and my wife both have big heads and we were shocked,” Christensen said. “But the funny thing about him is the doctors were like, ‘He has the biggest feet out of any newborn baby we’ve ever seen.’ They measured it, and he was like 3 inches. They were like, ‘We’ve never seen that in our life.’ He just has massive feet, and they stick out. There’s pictures, and people are like, ‘Is that a real picture of his feet?’”

Christensen can relate. His family referred to him as having “Fred Flintstone feet” when he was a baby.

“We have a bunch of newborn socks, but none of them fit,” he said. “The heel, it only goes to half of his foot. But then we tried to get him six-to-nine-month socks. They fit length-wise, but his feet are still so skinny that they’re just so baggy they still look really goofy.”

Panthers general manager Scott Fitterer said he's not sure if he's ever drafted a player who is 24 years old like Christensen.

Christensen traveled overseas to New Zealand as an 18-year-old on a mission trip where he learned to love Polynesian food and bulked up on seafood.

“I wouldn’t be the prospect I am today as a 22‐year old without my mission,” Christensen said. "I really feel like it helped me mentally and physically out there. I was able to put on some good weight out in New Zealand and really be able to grow into my body. I was a late bloomer, so physically and mentally, I feel like I’m mature at this age.

Fitterer said that Christensen's maturity made him an attractive prospect, but added drafting him “wasn't about that.”

“We liked the athlete,” Fitterer said. "I was at the BYU pro day, and he was really impressive in person. Then you hear about the character, the work ethic, the intelligence, the toughness, that’s what really sold us on him.”

Christensen helped protect one of the nation's best quarterbacks in Zach Wilson, the No. 2 overall pick in the draft. This past season he received a 96 grade by Pro Football Focus, the highest grade ever given to a college lineman.

“I think for sure I can play left tackle at a high level. I know I can,” Christensen said, a three-year starter at BYU. “I proved it in college. I feel like those skills can definitely translate to playing left tackle in the NFL.”