Patriots head into bye with chance to make noise in division 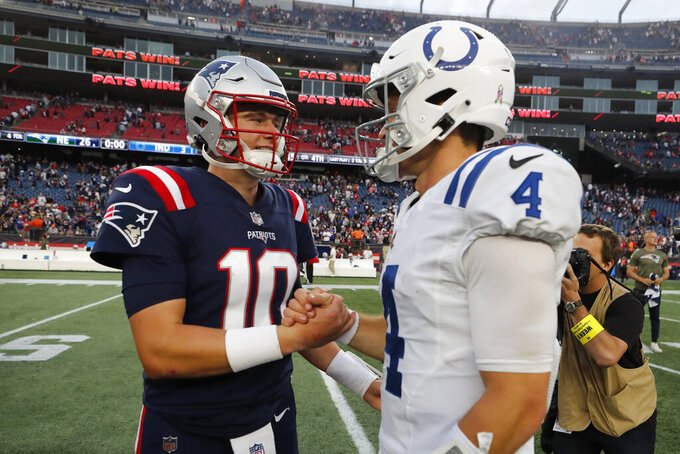 FOXBOROUGH, Mass. (AP) — Bill Belichick believes he doesn’t truly get a clear picture of the identity or potential of his team until sometime around the Thanksgiving holiday each season.

New England isn’t quite to that point as it enters its bye week. But the Patriots coach isn’t short on information about a group that at 5-4 finds itself above .500 for the first time this season heading into the downslope of the schedule.

“We certainly know a lot more about our teams after nine regular-season games than we did back in September after three preseason games,” Belichick said. “So, this will give us a good chance here in the next few days to look a little closer and find some areas that we can improve in as we go forward. Hopefully that will help us.”

Despite being at the bottom of the AFC East standings, the Patriots are just 1 1/2 games behind first-place Buffalo (6-2). The Patriots still have four division games left to play, including two against the Bills.

New England hasn’t finished last in the division since Belichick’s first season in 2000.

The Patriots’ defense has played a big role in them winning four of their last five. But quarterback Mac Jones will have to play better if they hope to make it back to the playoffs.

He threw two touchdowns and five interceptions in his first three games before being sidelined three weeks with a high ankle sprain.

He has been taking better care of the ball in his three games back, throwing two TDs and two picks. Still, he says his standard is higher in Year Two.

“We want to play our best team ball,” Jones said. “Our defense and special teams are playing really well. We’re playing good at spots, but we need to continue to go up here and stop riding the wave, which we will. I think we have really talented players at every position. ...

"So we’ll look at everything. I know our coaches have been grinding it out, doing a great job, putting us in a position to succeed. We’ve got to go out and execute a little better.”

Belichick said in the preseason that the strongest unit coming out of training camp was the secondary. It has lived up to that billing.

Execution in the red zone has been a weak point for the Patriots throughout the season. Through nine games, they have scored TDs only 12 of 26 opportunities inside the 20 (46.2%), ranking 29th in the NFL in red zone efficiency.

The offensive line has also been wildly inconsistent, logging 25 penalties on the season. The issues have led to shuffling at both tackle and guard, with veteran Isaiah Wynn and rookie Cole Strange being benched for performance reasons. Complicating matters has been the absence of center David Andrews for the past two games as he recovers from a concussion.

Matt Judon. The linebacker made an instant impact during his first year in New England last season, becoming the first player of the Belichick era in New England to register 12 1/2 sacks. He’s already at 11 1/2 through nine games this year and is coming off a season-high three sacks against Indianapolis. He’s had at least one sack in seven games this season.

Wynn. He moved from left to right tackle before the season and hasn’t adapted well to the change. He has been whistled for an NFL-high eight penalties and recently lost his right tackle job to veteran Marcus Cannon.

The 2018 first-round pick is scheduled to become a free agent this summer.

The Patriots head into their bye with three players on injured reserve. Cannon provided some needed relief at tackle before sustaining a concussion and being added to the list before the game against the Colts. RB Ty Montgomery played in the season opener, but has been sidelined since with a knee injury. Rookie OL Chasen Hines was placed on IR with an undisclosed injury Saturday.

WR DeVante Parker and DL Christian Barmore were inactive Sunday, both dealing with knee injuries. Andrews continues to work back from a concussion.