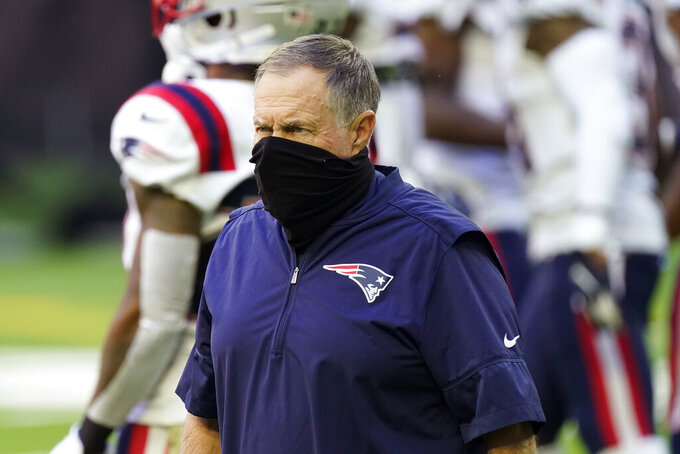 FILE - New England Patriots head coach Bill Belichick prior to an NFL football game against the Houston Texans, Sunday, Nov. 22, 2020, in Houston. The Patriots host the Arizona Cardinals on Sunday Nov. 29. With a win, Arizona can also add yet another blow to the New England’s fading playoff hopes (AP Photo/David J. Phillip, File)

“That was something I tried to seal the deal with. It didn’t work as much as I would have liked but I definitely tried with the ring,” Kingsbury said this week.

Kingsbury, a quarterback, was drafted by New England in the sixth round in 2003, joining a roster that included a 26-year-old Tom Brady. Even then, Kingsbury knew there was something different about him.

“He was still the man, there’s no doubt. Everybody knew who he was, and he was a superstar,” Kingsbury recalled.

An arm injury and yearlong stay on injured reserve prevented Kingsbury from ever playing a regular-season snap at quarterback for the Patriots, and he was cut prior to the 2004 campaign. But Kingsbury says he owes his coaching career to the year he spent studying under coach Bill Belichick and his staff.

“There were a bunch of really good offensive coaches that I was fortunate enough to be around,” Kingsbury said. “I did a little bit of everything. It taught me how to break down games, and game plan, and all stuff that I still use today.”

“He was not a guy you had to tell anything more than once, and he picked up a lot of things on his own,” Belichick said.

Now Kingsbury will try to use those tools against his former team when he leads the Arizona Cardinals (6-4) into Sunday’s matchup with the Patriots (4-6). With a win the Cardinals can improve their chances of making it back to the playoffs for the first time since 2015. They can also add yet another blow to New England’s fading hopes of extending its streak of 11 consecutive postseason berths.

Arizona won’t have one of its best weapons this week. Star receiver Larry Fitzgerald was placed on the Reserve/COVID-19 list on Thursday along with receiver Trent Sherfield. The 37-year-old Fitzgerald is in his 17th NFL season and hasn’t missed a regular-season game since 2014.

But even without Fitzgerald, Belichick says the Cardinals’ big-play ability remains strong.

Cardinals quarterback Kyler Murray fell on his right throwing shoulder early in last Thursday’s loss to the Seattle Seahawks. Murray could be seen grimacing occasionally on the sideline while throwing, but he stayed in the game and had a solid performance, completing 29 of 42 passes for 269 yards and two touchdowns.

Murray said he was limiting throws in practice and felt he’ll be fine for the Patriots game.

“I feel good,” Murray said. “Obviously getting banged up a little bit the past couple of weeks."

HELP AT RUNNING BACK

Patriots running back Rex Burkhead said on Instagram this week that he is out for the season after sustaining a knee injury in last week’s loss to the Texans.

Burkhead was one of the more versatile pieces of the Patriots’ offense and was having one of the best years of his career with a combined 466 yards and six touchdowns rushing and receiving.

Help could be on the way. Sony Michel was activated from injured reserve last week after being sidelined since Week 3 because of a quad injury. He was a healthy scratch against Houston, but could be ready Sunday to add to a group that still has leading rusher Damien Harris and James White.

Arizona’s offensive line doesn’t have a lot of big names but has quietly been among the best in the NFL this season. That's an important reason why the Cardinals are averaging 414.3 total yards per game, which leads the league.

“They usually are the unsung group, but everybody knows they’re kind of the heart and soul,” Kingsbury said. “I’ve been very proud of our group and the evolution from Year 1 to Year 2.”