Pelicans going at own pace after hitting NBA lottery jackpot 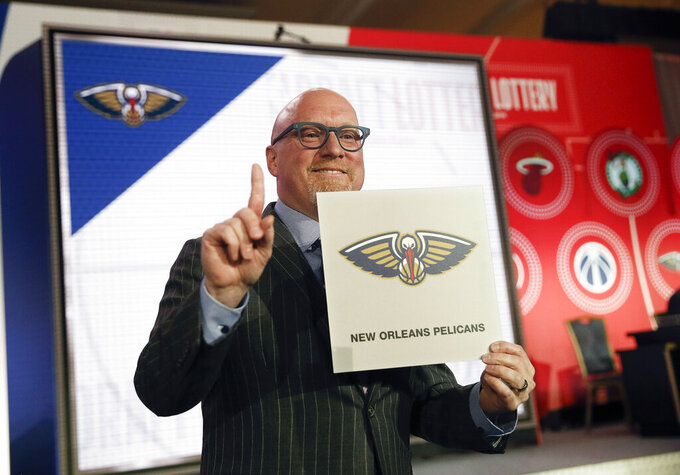 David Griffin, Executive Vice President of basketball operations for the New Orleans Pelicans holds up a placard after it was announced that his team had won the first pick during the NBA basketball draft lottery Tuesday, May 14, 2019, in Chicago. (AP Photo/Nuccio DiNuzzo)

NEW ORLEANS (AP) — In the NBA city most familiar with "gris-gris," folks see no small measure of poetic justice in the fact that their team will dictate the fate of a coveted prospect named Zion.

Mystical explanations aside, the Pelicans are in the driver's seat now — but say they're in no hurry to disclose their plans for likely pick Zion Williamson or disgruntled All-Star Anthony Davis.

A franchise that looked downtrodden for months since Davis requested a mid-season trade has been suddenly buoyed by the leverage that comes with winning the NBA's draft lottery— and the option to pick the Duke star, widely seen as the best pro prospect since Davis entered the league in 2012.

"What it's doing to the franchise and to the city of New Orleans is probably not even measurable at this point," said David Griffin, hired just weeks ago as New Orleans' top basketball executive. "There's a groundswell of excitement that frankly is palpable.

"What has to come next is that we have to make it mean something. This is a lot of fun, but we've got to build a winner now."

It was welcome news for beleaguered sports fans in Louisiana, who had endured a rough start to 2019.

It started with the "NOLA no-call," a pair of missed penalties in the waning minutes of the NFC championship that likely cost the NFL's Saints a Super Bowl berth. Fans were so angry that many joined lawsuits against the league or attended parties on Super Bowl Sunday which featured re-runs of the Saints' 2010 title triumph instead of the most recent championship game between New England and the Los Angeles Rams.

Less than two weeks later, Davis, the city's six-time NBA All-Star and face of the Pelicans, publicly requested a trade , and the firing ninth-year general manager Dell Demps followed not long after.

Even at the major college level there was disappointment when one of LSU's best campaigns in program history was tainted by the suspension of coach Will Wade amid questions surrounding his recruiting tactics. Wade wasn't reinstated until after LSU was eliminated in the third round of the NCAA Tournament, and his future remains far from certain.

Political commentator James Carville — a Louisiana native, New Orleans resident and avid sports fan — said Wednesday that the recent series of setbacks had led him to adopt a pessimistic theory that, "We are a cursed people, and so all we're going to get is curses."

Then came Tuesday night's NBA draft lottery, which the Pelicans had a 6% chance of winning. In New Orleans, interest had focused more on seeing which other team would get the top overall pick and become more of a player in a potential Davis trade. Instead, the Pelicans got that pick, placing them in a stronger position to try to change Davis mind — or dictate more favorable trade terms.

"This is big," said Carville, a Pelicans season ticket holder along with his wife, and fellow political commentator, Mary Matalin. "It's good for the psyche of everybody."

Pelicans coach Alvin Gentry stood up and joyously shouted an expletive when New Orleans was announced as the lottery winner, after which he apologized with a grin, sat back down and put both hands on his head.

Owner Gayle Benson's decision to hire Griffin, who announced at his introduction last month that he would not make a coaching change , combined with the New Orleans' top draft position, represent a sharp turn in fortune for Gentry after a trying year that began with last summer's defections during free agency of DeMarcus Cousins and Rajon Rondo.

But it could take a while to see how the Pelicans' lottery luck plays out.

Griffin, the club's executive vice president of basketball operations, foreshadowed a deliberate approach to dealing with Davis, who is under contract through next season.

"I want Anthony Davis to be part of this," Griffin said. "If Anthony wants to buy into that, then that's fantastic. And if he doesn't, then we'll deal with it when it becomes appropriate. But this isn't something for me where that answer happens because of a conversation. That answer is going to reveal itself over a period of time."

Griffin also stopped short of confirming that the Pelicans would draft Williamson — albeit for reasons relating more to his insistence on adhering to his own managerial process than because of any doubts about the 6-foot-7, 285-pound Duke star.

"We just have to know what the fit is like among those people in the pool for us in terms of who we thought were the most elite players," Griffin said, emphasizing that "there was more than one" such player.

"Everybody wants to look at this as this is a fait accompli. If that were true, we would have gotten up there with somebody's jersey in our hands," Griffin said. "I'm not saying there's anything at all derogatory about Zion in any way. What I'm saying is ... you can hope that people are like-minded, but until you talk about what matters to you and you sit in a room together, it's hard to know."

One thing is for sure, it's nice to have options.