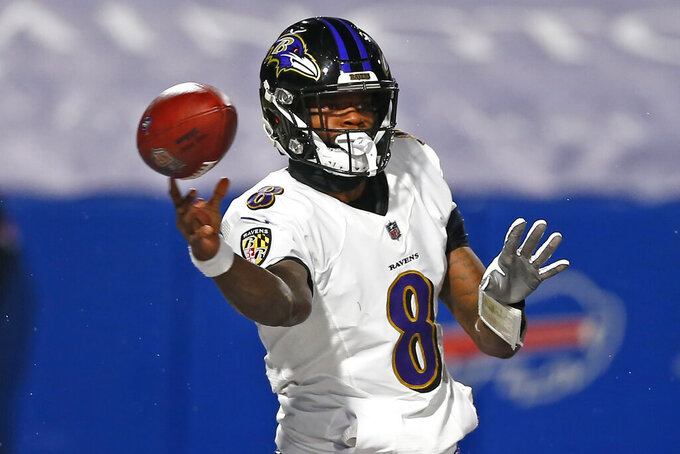 FILE - In this Jan. 16, 2021, file photo, Baltimore Ravens quarterback Lamar Jackson throws a pass during the first half of an NFL divisional round football game against the Buffalo Bills in Orchard Park, N.Y. The Ravens have exercised the fifth-year option for Jackson, the team announced Friday, April 30, 2021. (AP Photo/John Munson, File)

The Baltimore Ravens have exercised the fifth-year option for quarterback Lamar Jackson.

The team announced the decision Friday, a few hours before the second and third rounds of the NFL draft. Jackson will make $23 million as part of a tiered system under the new collective bargaining agreement.

Jackson, the NFL MVP for the 2019 season, threw for 2,757 yards with 26 touchdowns and nine interceptions (99.3 rating) last year. He also became the first quarterback in league history to have two 1,000-yard rushing seasons. But he has struggled in the playoffs.

The Ravens are interested in signing Jackson to a long-term extension, which will come at a high cost, of course.

Last year, Deshaun Watson became the most recent quarterback to land a mega-deal, inking a four-year, $156 million extension with the Houston Texans. Watson has since demanded a trade from the struggling franchise.

Patrick Mahomes signed a 10-year extension worth up to $503 million with the Kansas City Chiefs in 2020. The deal is the most lucrative in North American sports history, surpassing the previous mark set by Los Angeles Angels outfielder Mike Trout, who signed a 12-year, $426.5 million contract in 2019.

In March, Dak Prescott reached a four-year, $160 million deal with the Dallas Cowboys

Those recent contracts helped set the market for Jackson, who is still playing under his rookie deal and averages $2.4 million per season. Jackson, the final pick (32nd overall) in the first round of the 2018 draft, is not due to become an unrestricted free agent until 2023.

Ravens general manager Eric DeCosta has remained committed to reaching a new deal with Jackson but acknowledged it will impact the way the team conducts business.

“It will change the way that we do contracts, potentially,” DeCosta said during the team’s pre-draft news conference in early April. “We will have to be probably a little bit more careful about which players we sign and which players we don’t sign. We may lose some good, young players. That’s unfortunately just the salary cap age that we’re in, and it happens to every single team.

“So, we’ll be aggressive, if possible. I think the draft will continue and will always remain the lifeblood of this organization when it comes to building this team and building the roster, and draft picks will be more important than ever.”