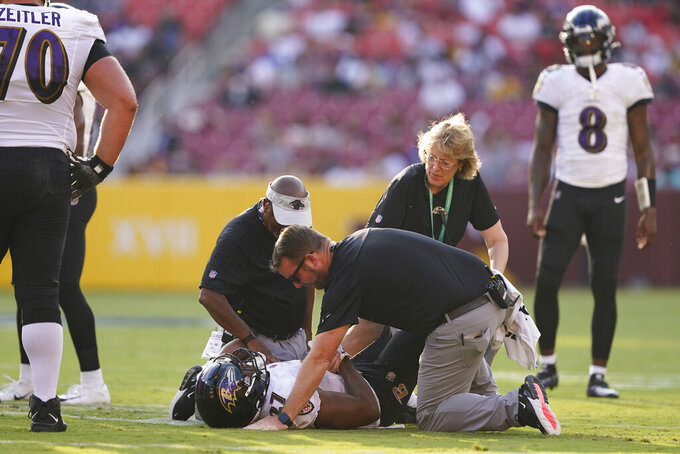 Baltimore Ravens running back J.K. Dobbins (27) lays on the ground after suffering an injuring during the first half of a preseason NFL football game against the Washington Football Team, Saturday, Aug. 28, 2021, in Landover, Md. (AP Photo/Carolyn Kaster)

OWINGS MILLS, Md. (AP) — It took one series last weekend for J.K. Dobbins to injure his knee, ending his season.

That's the risk the Baltimore Ravens were taking by putting him on the field — and coach John Harbaugh understands the second guessing.

“It's a fair conversation," Harbaugh said. "We played the whole offense for nine plays I think it was. Those guys played for no more than 23 plays the whole preseason — that's what J.K. had.”

Dobbins was hurt on a screen pass in Saturday night's preseason finale at Washington, and now the Ravens have to replace a major part of their offense. Baltimore led the NFL in rushing last season, with quarterback Lamar Jackson leading the way. Dobbins ran for 805 yards as a rookie, and fellow running back Gus Edwards wasn't far behind at 723.

The Ravens put Dobbins on injured reserve Monday. Now Edwards and the rest of Baltimore's depth will be tested. The Ravens could also add help from outside the organization — but they're unlikely to find anyone with the type of promise Dobbins has shown since arriving in the NFL out of Ohio State.

The Ravens beat Washington to set a record with their 20th consecutive preseason win, but that obviously wasn't the big story of the night. Baltimore has dealt with injuries and absences throughout training camp, from Jackson and Edwards testing positive for COVID-19 and missing the start of camp, to a new-look receiving group struggling to stay healthy.

Receiver Rashod Bateman, a first-round draft pick this year, has been out because of groin problems. Marquise Brown, the team's top returning receiver, has been limited by hamstring issues, although Harbaugh said he'd be at practice Monday.

Baltimore could have held Dobbins and other key players out of Saturday's game, but there's a difficult balance to strike between playing it safe and making sure players experience some game action before the regular season.

“Some teams play their guys a lot. I've watched certain teams, you know who they are, they played their starters every single game extensively. A lot of teams in our division have done that," Harbaugh said.

"Teams we're competing against in the AFC have pretty much all done that, but there are other teams that don't play their guys at all — they don't play their starters even one snap. I know we're farther down that road than we've ever been.”

The Ravens open their season Sept. 13 with a Monday night game at Las Vegas.

Dobbins' injury comes with Tuesday's deadline for roster cuts looming. There will presumably be other running backs available after that. Aside from Edwards, Baltimore's in-house options include Justice Hill, who had 58 carries in 2019 and a dozen last season. Ty'Son Williams spent most of his rookie season on the practice squad last year.

“Ty'Son, you do the math, he's there. He'll be out there playing,” Harbaugh said. “He's ready to go. He's practiced every day, and he's excited about his opportunity.”

Rookie Nate McCrary led the team in carries this preseason.

NOTES: Harbaugh said backup QB Trace McSorley (back) is back practicing, but CB Jimmy Smith (ankle) is not expected to practice this week. “Very hopeful that he'll practice next week," Harbaugh said. "He'll be back, if not next week, very early in the season. It just didn't come around as quickly as I think they thought it was going to.” ... The Ravens released WRs Devin Gray and Siaosi Mariner and terminated OL Michael Schofield.