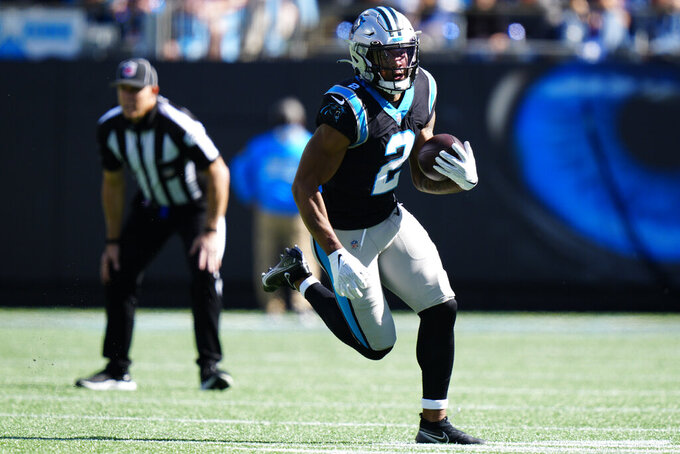 In an effort for the Panthers to “find their identity” with star running back Christian McCaffrey still out with a hamstring injury, Rhule plans to lean more on rookie Chuba Hubbard and the running game beginning this week against the New York Giants.

“We have ran the ball well, but we have not been committed enough to running it — and that’s going to change, I can tell you right now,” Rhule said emphatically during a news conference Monday. “You will see a vastly different look from us moving forward. We're not going to line up and drop back and throw it 40 times a game and think that is going to win the game for us. It hasn't.”

Sam Darnold's pass attempts have been on the uptick since McCaffrey left in Week 3 — and that has not meant good results for the Panthers.

While Rhule said Darnold “is not playing well enough,” he believes the coaching staff needs to help him out by becoming more balanced on offense and using the running game to set up the play-action.

So, expect to see more of Hubbard moving forward.

“Chuba has shown he can run the ball at a high level, given enough opportunities,” Rhule said.

Hubbard carried 13 times for 57 yards in his first NFL start against the Dallas Cowboys three weeks ago. The following week, he ran 24 times for 101 yards against the Philadelphia Eagles, but only carried 16 times for 61 yards and one touchdown in Carolina’s 34-28 overtime loss to the Minnesota Vikings on Sunday.

Special teams. A week ago, the Panthers had a punt blocked that led to the Eagles' go-ahead touchdown in the fourth quarter. On Sunday, special teams coordinator Chase Blackburn turned the tables, using a similar type of stunt at the line of scrimmage to free up Frankie Luvu to block a Vikings punt resulting in a Kenny Robinson scoop and score.

Pass rush. After registering 14 sacks in the first three games, the Panthers have just two sacks in the last three games. Defensive end Brian Burns said opposing teams are keeping extra players in to pass protect and the recent quarterbacks they've faced — Dak Prescott, Jalen Hurts and Kirk Cousins — have been using three-step drops to get the ball out quickly. “They put a tight end and a receiver on both sides usually when they were about to pass the ball,” Burns said of the Vikings' game plan. “They were really double chipping frequently throughout the game. Just putting guys in our way just to mess with our eyes or whatever to slow us down."

CB Keith Taylor. There weren't a whole lot of bright spots for Carolina's defense after allowing 34 points, but Taylor had some moments. He finished with 10 tackles, three passes defensed and a forced fumble. He did give up a touchdown pass to Adam Thielen and had a role in allowing Kirk Cousins' winning pass to K.J. Osborn. The problem for Taylor is his reps could be dramatically trimmed once C.J. Henderson and Stephen Gilmore return from injuries.

Clock management. The Panthers were called for a delay of game Sunday — after returning to the field following a timeout. When Darnold broke the huddle, he noticed at least two players were out of position. Unable to fix the alignment, he tried to call for a second timeout, which is against NFL rules. The issue was the Panthers had already lost two wide receivers to injuries and there was some confusion between deep-on-the-depth-chart wide receiver Alex Erickson and a tight end as to where to line up. “Sam was in a bad position where they were all lined up wrong. So that falls on us as coaches to get that done right,” Rhule said.

Erickson and fellow wide receivers Terrace Marshall Jr. both sustained concussions, while Brandon Zylstra left briefly with a hamstring injury but eventually returned. The Panthers are hoping linebacker Shaq Thompson might have a chance to play Sunday after missing the last two games with a foot injury.

48 to 14 — The margin by which the Panthers have been outscored this season in the third quarter.

The Panthers look to bounce back Sunday at the New York Giants. Recently acquired cornerback Stephon Gilmore is eligible to return this week from the PUP list. If he's healthy enough to play, it would certainly help a pass defense that surrendered 373 yards and three TDs to Cousins.