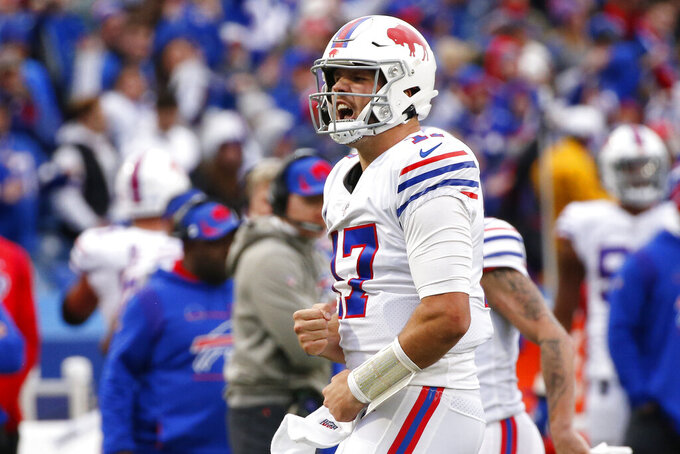 Buffalo Bills quarterback Josh Allen (17) celebrates after his touchdown during the second half of an NFL football game against the Miami Dolphins, Sunday, Oct. 31, 2021, in Orchard Park, N.Y. (AP Photo/Jeffrey T. Barnes)

The Bills were in the playoffs for the first time since 1999 when they lost to the Jaguars in a wild-card game four years ago. It turned out to be one of the first steps in what Jacksonville coach Urban Meyer calls “one of the best builds in recent history.”

Now the Jaguars get to see the finished product.

Buffalo (5-2) returns on Sunday with the NFL’s top scoring offense and defense, a team that is currently the betting favorite to win the Super Bowl.

The Bills are 14 1/2-point favorites against Jacksonville (1-6), according to FanDuel Sportsbook, and no one should be shocked if the final score isn't even that close.

Buffalo has won six of its past seven, with the lone setback coming at Tennessee three weeks ago. Quarterback Josh Allen slipped on a fourth-and-1 play from the Titans 3-yard line in the waning seconds, and the Bills lost 34-31.

Jacksonville, meanwhile, looked lost on the West Coast last week. Seattle scored on four of its first six drives and led 24-0 before the Jaguars reached the red zone. The Jags also were flagged 12 times. Meyer called the performance “a step back.”

“Really just flush it and get ready for this week,” rookie quarterback Trevor Lawrence said. “Obviously, there are a lot of mistakes to correct, but we can do that, and it’s simple things that we can control.”

Jacksonville can only hope to follow Buffalo’s path as the small-market franchise navigates yet another rebuild.

The Bills are 5-2 through seven games for a third consecutive season and for the fourth time in five years under coach Sean McDermott and general manager Brandon Beane. They are much more polished on both sides of the ball than they were just four years ago.

“We’re a more mature football team,” Poyer said. “We’ve grown a lot throughout the years. We’ve had a lot of experience together with the guys. And I think that’s probably the key word is experience — guys being in the system two, three, four, five years now. And we’ve played a lot of football together.”

The Jaguars looked as if they were building something similar in 2017. But their loaded defense imploded and a series of first-round draft picks — defensive end Dante Fowler, quarterback Blake Bortles, running back Leonard Fournette, defensive lineman Taven Bryan, cornerback CJ Henderson — turned out to be mistakes.

“I guess we kind of were a one-hit wonder, that whole team, because they blew that team up,” Jaguars defensive end Lerentee McCray.

McCray is one of eight holdovers on Jacksonville’s roster, but four of them are backups and two more are likely in their final season with the team.

Buffalo, meanwhile, has hit on every first-round pick since that playoff game, including quarterback Josh Allen. It caught the attention of Jaguars general manager Trent Baalke, who pointed it out to Meyer as an NFL model to follow.

“We still have so much work to do,” Meyer said. “We have studied Buffalo, how they built it. It was really intriguing for all of us, how they built that team. In my mind, Buffalo is one of the best builds in recent history.”

Jaguars running back James Robinson, who ranks ninth in the league in rushing this season, missed two days of practice because of a bruised heel on his right foot. Robinson is expected to be a game-day decision.

If he doesn't play, journeyman Carlos Hyde would make his first start of the year.

“We all put the same work in throughout the week,” Hyde said. “The game plan shouldn't change.”

Josh Allen and Josh Allen probably should swap jerseys after the game. After all, it will be the first time either has played against someone with the same name.

Buffalo’s star quarterback and Jacksonville’s standout defensive end will meet for the first time Sunday, a matchup of guys with identical first and last names selected in the exact position in consecutive NFL drafts.

Buffalo traded up five spots to select Joshua Patrick Allen with the seventh overall selection in 2018. Jacksonville landed its Joshua Allen at No. 7 a year later.

Buffalo's Allen downplayed his appearance on ESPN’s “Manningcast” featuring Peyton and Eli Manning. Allen was a guest during the third quarter of Kansas City’s win over the New York Giants on Monday night.

“Honestly, going live, it’s kind of nerve-wracking, so I was trying not to do anything stupid,” Allen said.