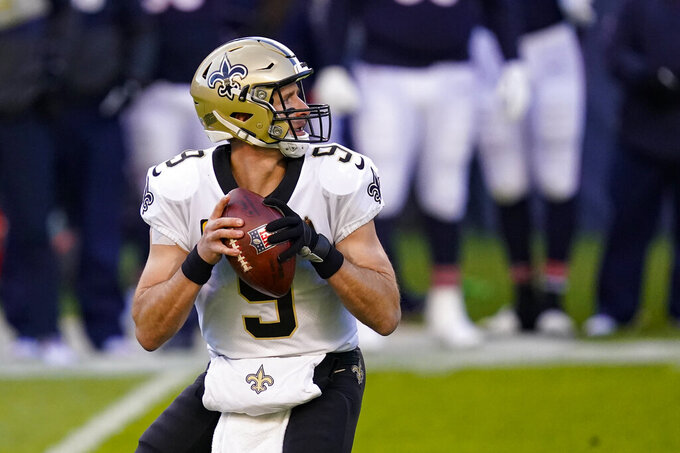 NEW ORLEANS (AP) — Saints receivers Michael Thomas and Emmanuel Sanders are on the cusp of returning to New Orleans’ passing game at an opportune time.

Both practiced Wednesday as the Saints (5-2) prepared for a visit to Tampa Bay (6-2) on Sunday night that will give the winner a leg up in the NFC South race.

And considering that the Buccaneers boast the NFL’s top-ranked run defense (allowing 70.4 yards per game on the ground), it could be fortuitous timing for the Saints to have two of their best receivers return to action.

“To have those two guys back with just their experience and their productivity and their playmaking ability will be good,” Brees said after practice.

The Saints have managed to win four straight without Thomas, and their past two victories also came without Sanders, a top offseason free-agent signing who went out late in Week 7 after testing positive for COVID-19. But both were healthy for nearly all of New Orleans’ Week 1 victory over Tampa Bay until Thomas sprained his ankle late in the fourth quarter.

Thomas, the 2019 Offensive Player of the Year after setting an NFL record with 149 catches in a season, has needed just four NFL seasons to become one of the most productive receivers in Saints history. But this season, he has just three catches for 17 yards and is coming off a series of setbacks that have extended his absence from the field. He was on track to return from his ankle injury in Week 5 before being benched for punching defensive back C.J. Gardner-Johnson in practice late that week. He was expected to return following a Week 6 bye, only to miss two more games with a hamstring injury.

But Thomas was able to practice on a limited basis last week and on Friday performed short-timed sprints under a trainer’s supervision. He also was again listed as limited in the Saints’ injury report on Wednesday, but it would not be unusual for a player listed as such to play in a game later that week.

Versatile running back Alvin Kamara, who currently leads the Saints in yards receiving and rushing, said Thomas’ mere presence on the field is bound to improve New Orleans’ offense.

“Without even giving him the ball, you have to account for Mike Thomas,” Kamara said. “He presents a threat. When you put the ball in his hands and get him moving around and running how he’s used to running and doing the things he’s used to doing, it’s not many players, many defenses that can stop him. ... We can’t wait to have him back.”

Sanders caught 26 passes for 302 yards and two touchdowns in five games, but his production was beginning to climb sharply when he was placed on the team’s COVID-19 reserve list. In his previous two games, he caught 18 passes for 215 yards.

He practiced fully on Wednesday.

“I couldn’t be more impressed with him just as a teammate and the way he works and way he practices,” Brees said. “And our rapport – I felt like we were really starting to click.”

Callaway was limited in practice after missing last Sunday's game in Chicago with an ankle injury that occurred a week earlier, when he had eight catches for 75 yards in a Week 7 win over Carolina.

Their form has Brees confident about the passing game even if Thomas or Sanders have setbacks.

“All the young guys stepped up and did a great job in their absence," Brees said. “That’s going to serve us well down the stretch because there might come times where we’re going to need everybody again.”

NOTES: Defensive tackle Sheldon Rankins, who left last Sunday’s game in Chicago with a knee injury, did not practice on Wednesday. Justin Hardee also did not practice because of a groin injury. But guard Nick Easton, who was held out last week because of lingering concussion symptoms, practiced fully. ... Kamara was limited in practice with what he said was a sore toe, with pain he compared to stubbing one's toe on a bed post. But he assured he'd return to practice this week and play.