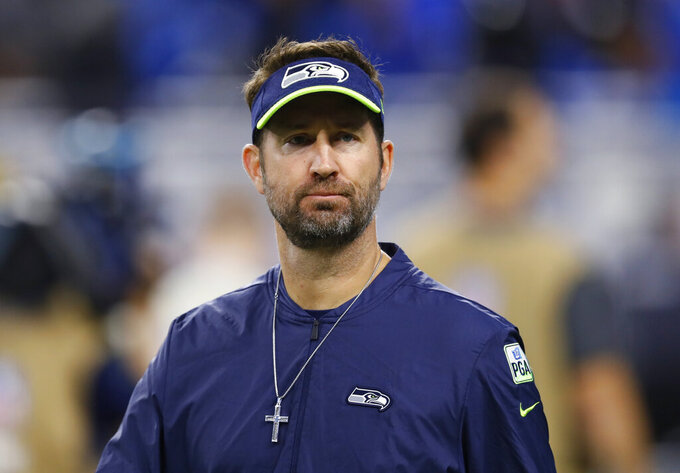 RENTON, Wash. (AP) — The Seattle Seahawks fired offensive coordinator Brian Schottenheimer on Tuesday following a season in which the team set several offensive records but coach Pete Carroll had clear issues with how the offense operated.

Seattle announced the move, citing “philosophical differences.” The Seahawks had the highest-scoring team in franchise history, Russell Wilson threw a career-high 40 touchdowns in the regular season, and wide receivers DK Metcalf and Tyler Lockett both set club records for receiving.

Still, the Seahawks regressed offensively in the second half of the season, and Wilson and Carroll both made comments following Seattle’s 30-20 playoff loss to the Los Angeles Rams that indicated concerns with the lack of adjustments by the offense late in the season.

Carroll brushed aside questions about any changes to his coaching staff during his end-of-season news conference on Monday.

“I would never anticipate changes in my staff and share that with you. I wouldn’t tell you whether we’re doing it or not,” Carroll said on Monday. “We got work to do. We have a ton of evaluations to do. We have to figure things out. We have to make decisions on how we’re moving forward and all of that.”

Schottenheimer, 47, completed his third season with the Seahawks after previously serving as the offensive coordinator of the New York Jets and St. Louis Rams. Seattle’s offense was humming at a record pace through the first half of the season, but problems emerged starting with the Seahawks' Week 10 loss to the Rams.

Over the final eight games, Seattle averaged 23.1 points per game after averaging 34.3 through the first eight games. Wilson averaged under 200 yards passing and defenses figured out schemes to take away the Seahawks' downfield passing game.

Carroll and Wilson both noted after the season a concern with the lack of counters to how defenses were playing the Seahawks. Carroll said Monday that one of his top priorities going into next season was to re-establish being a run-dominant team.

“It’s really a football thing. It’s a scheme thing and I want to see if we can run the ball more effectively to focus the play of the opponents and see if we can force them to do things like we’d like them to do more, like we have been able to do that in the past,” Carroll said. “That doesn’t mean we’re going to run the ball 50 times a game, it means we need to run the ball with direction and focus and style that allows us to dictate the game.”

Clearly, what Carroll wanted didn’t fit with Schottenheimer’s view of how to move forward.

Schottenheimer was brought to Seattle as the replacement for Darrell Bevell in 2018 following two years as the quarterbacks coach with Indianapolis. Wilson had two of his three best passing seasons under Schottenheimer and this year set career highs in TD passes and completion percentage. Metcalf set a franchise record with 1,303 yards receiving and Lockett became the first Seattle player to reach 100 receptions. But even Wilson saw issues with the offensive as the season went on.

“Early in the season we were able to get the deep shots and stuff like that early on. I think our tempo, our pace and stuff, getting in and out and all that, we kind of lost that a little bit,” Wilson said. “I think that’s something that we do really, really well. To keep that tempo and pace I think is something I’m going to really try to study a lot this offseason and see how do we continue to put our foot on the gas and everything else along the way.”