Seahawks get contributions they wanted from rookie class 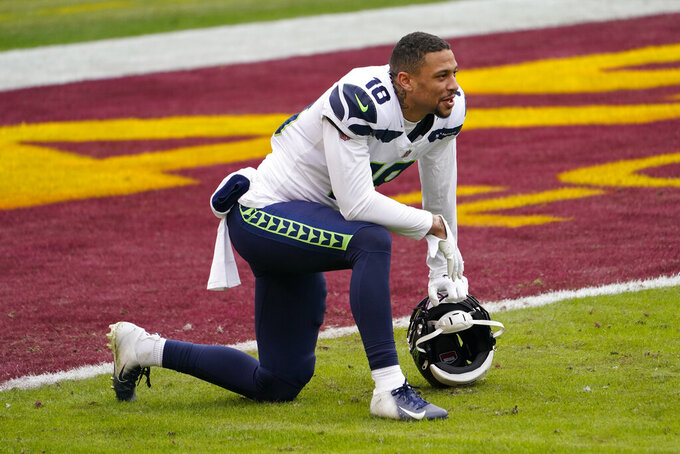 Seattle Seahawks wide receiver Freddie Swain (18) on the field before the start of an NFL football game against the Washington Football Team, Sunday, Dec. 20, 2020, in Landover, Md. (AP Photo/Andrew Harnik)

RENTON, Wash. (AP) — When the NFL draft concluded back in April, it was clear what Seattle Seahawks coach Pete Carroll and general manager John Schneider were trying to find.

They didn't seek out players who needed time to develop. They wanted a group that could help from the start.

While it’s been a mixed bag with some surprises and some disappointments, the Seahawks seem to have accomplished their goal. The group may not have the initial flash of some of Seattle’s previous draft classes, but the Seahawks found significant contributors.

“We have gotten really good results from these guys,” Carroll said. “These guys have all factored in and done something to help us win.”

The most notable rookies have been starting weak-side linebacker Jordyn Brooks and guard Damien Lewis, both of whom seem to have starting spots locked up for the future. But the depth of the rookie group has the Seahawks feeling optimistic about the future.

Running back DeeJay Dallas started two games around midseason due to injuries after being pegged as most a third-down option earlier in the season. Defensive end Alton Robinson has four sacks while playing mostly in a reserve role.

Freddie Swain was thought to be a possible training camp cut, but has become vital as a fourth receiver in Seattle’s offensive sets due to a season-long injury to Phillip Dorsett. Swain has 13 receptions and a pair of touchdowns.

“It hasn’t been too big for any of them. They’ve been able to handle it. They’ve responded well. They’ve played well early. They’re growing now. Guys are experienced players for us and contributing,” Carroll said.

“So I think there’s nothing to change us, I think, moving forward from that. The care that we took in the individual guys and who they were in their makeup. It was really important for us.”

Brooks and Lewis have been the stars of the group.

Lewis was deemed a starter from the moment Seattle drafted him in the third round out of LSU. He met those expectations in training camp and has started every game. Should he start Sunday vs. San Francisco, Lewis would be the seventh offensive lineman in team history to start all 16 games as a rookie.

Brooks was Seattle’s surprise pick in the first round, but the value of his selection has increased as the year has progressed. When Bruce Irvin was lost for the year with a knee injury and K.J. Wright shifted to a different position, the Seahawks called on Brooks to step in.

Last week against the Los Angeles Rams was perhaps the best example of Brooks’ impact so far. He played 28 defensive snaps — not even 50% — but still tied for the team lead with eight tackles.

“You can tell at the end of the season is really starting to come into his own. ... He’s only (at the) tip of the iceberg. This kid, he has a lot to give and he’s just getting started,” Seattle defensive coordinator Ken Norton Jr. said.

It hasn’t all been successful. Seattle drafted defensive end Darrell Taylor in the second round expressly to help with its biggest offseason concern, the pass rush.

But Taylor has suffered multiple setbacks after having offseason surgery for a stress fracture in his lower leg and is likely not to play a down this season. Carroll was optimistic a week ago that Taylor could potentially be available in the playoffs, but that tone turned more pessimistic earlier this week.

Still, it's a group Carroll believes has foundational pieces moving ahead.

“We really like this class. If we could do it again, we’d be thrilled,” Carroll said.

NOTES: Seattle signed veteran TE Luke Willson and LB Ray-Ray Armstrong to the practice squad on Wednesday. Willson appeared in five games for Seattle earlier in the season before being released. Willson was signed by Baltimore and appeared in three games for the Ravens before being let go.