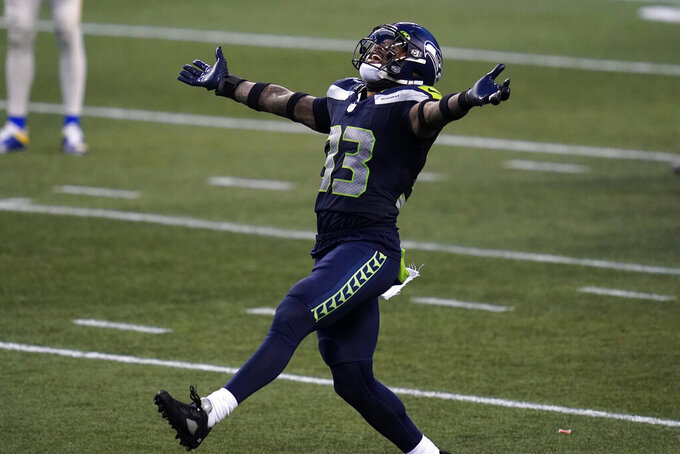 Seattle Seahawks strong safety Jamal Adams (33) reacts to a play against the Los Angeles Rams during the second half of an NFL football game, Sunday, Dec. 27, 2020, in Seattle. The Seahawks won 20-9. (AP Photo/Elaine Thompson)

Adams was emphatic he would be on the field for the Seahawks' NFC playoff opener against the Los Angeles Rams after leaving Seattle’s Week 17 win over San Francisco in the second half with a shoulder injury.

Adams appeared angry and dejected on the sideline after being examined by Seattle’s medical staff Sunday. By Wednesday, he was jovial and excited to play.

“Look, as long as these legs are moving man, as long as my faith is with the man upstairs, which is very strong, I’m gonna be out there," Adams said. "So there was never no doubt in my mind that I wasn’t playing so let’s get that out there. I’m full-go.”

Adams missed four games earlier in the season because of a groin injury. He said he played with one arm during the first meeting with the Rams in November after injuring his right shoulder in the opening minutes of the game.

This time it’s his left shoulder. Adams declined to specify what was injured on the play when he was blocked by San Francisco’s Jerick McKinnon.

“Just a little lucky hit. It happens,” Adams said. “Just blitzing and he caught me. Nice little hit so I got to give it to him, but at the end of the day it’s not going to slow me down.”

Adams led Seattle with 9 ½ sacks in the regular season, the most by a defensive back since sacks became an official stat in 1982. He is the first defensive back to lead his team in sacks since 2011.