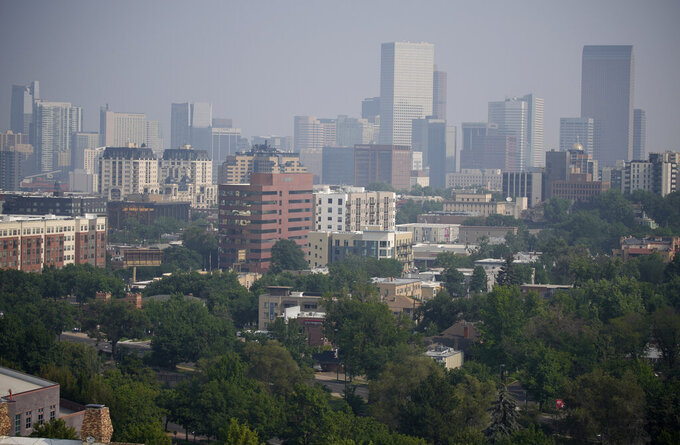 ENGLEWOOD, Colo. (AP) — The Denver Broncos had to move their only scheduled stadium practice indoors Sunday because of smoky skies from the California wildfires that made Denver's air among the world's most polluted.

When the workout began inside the Pat Bowlen Fieldhouse at the UCHealth Training Center, Denver's air quality was the second-worst globally, trailing only the Russian city of Krasnoyarsk in the middle of Siberia, according to IQAir’s world air quality rankings.

Which is exactly what coach Vic Fangio decided to do when he moved his practice from Empower Field at Mile High to the team's indoor facility that's normally a haven from wintry weather or late-summer thunderstorms and lightning strikes.

“I've definitely never seen that before,” safety Kareem Jackson said of moving things indoors because of bad air. “But I definitely appreciate having an indoor (facility) and being able to come in. A lot of teams don't have that luxury, so I'm definitely thankful for that.”

Fangio said he was able to accomplish most of what he wanted to with his team playing indoors on artificial turf rather than on the grass at their stadium.

“So, we lost that. I would have preferred that but we chose not to."

Fangio said none of his players has reported any respiratory problems from the poor air quality, but he concurred with his medical staff, which recommended the indoors practice.

“I guess technically it was my call, but I was heavily influenced on what call to make by the medical people,” Fangio said. “But it was left up to me.”

Fangio said he'd consider rescheduling his team's trip to Empower Field later this month: "We might go down there. Nothing planned yet.”

As far as football, the tight quarterbacks competition between Teddy Bridgewater and Drew Lock remains to close to call. Lock had a terrific start to the day, hitting Courtland Sutton for what would have been a 73-yard touchdown were it not blown dead at the 10-yard line so the team could get some red-zone work in.

Lock started out hot but cooled down as the day went on. Bridgewater was somewhat more proficient in goal-line drills, but the day probably went to Lock given his sizzling start, which included a 15-yard fade pass he threaded over several defenders and into the hands of DeVontres Dukes in the left corner of the end zone.

Fangio said there's still been no discernable separation between the two.

During drills, pass rusher Bradley Chubb and left tackle Garett Bolles, faced each other several times without incident a day after they got into a fight at practice.

Fangio said he still didn't know what precipitated the fight but “we talked to both of them, I think we're in a good spot, they worked against each other a lot here today.”

Bolles and Fant declined opportunities to speak with the media Sunday.