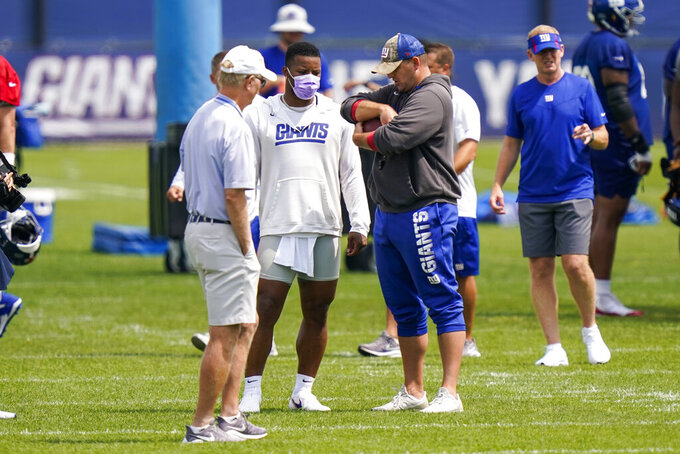 NEWARK, N.J. (AP) — There is little doubt John Ross hasn't lived up to expectations after being taken with the ninth pick overall in the 2017 NFL draft, at least statistically.

In four years with the Cincinnati Bengals, the injury-plagued, speedy wide receiver played in 27 games with 20 starts and had 51 catches and 10 touchdowns.

Ross' injury list was more notable. The former University of Washington star had shoulder and knee problems as a rookie, a groin issue in his second season, a sternoclavicular injury that cost him half of 2019, and a foot injury that landed him on injured reserve after three games last season.

The Bengals gave up on him after the season and the New York Giants stepped in and signed him as a free agent in March. He was the deep threat the team need before taking Kadarius Toney in the first round of the 2021 draft.

Ross doesn't want to dwell on the past. Needless to say, his inability to stay on the field has hurt. He has not played a full season. The California native also said he has learned that life is bigger than football.

“I think that kind of got to me over these last couple of years,” Ross said. “I think I put too much stress into the game and not into myself. You know, I learned that I need to take this day by day, take it for what it is. And like I’ve been saying earlier, just continue to work hard every day. I’m here to do a job and that's what I should be focused on.”

The Giants receiver room has a lot of talent. New York got one of the top free agents in signing Kenny Golladay, added Toney in the draft, and starters Sterling Shepard and Darius Slayton also are returning, along with Dante Pettis, Austin Mack and C.J. Board. All had catches last season.

Ross and Pettis are friends. They played together with the Huskies, and Ross talked to his buddy about playing for the Giants. Realistically, they could be fighting for a spot.

It should not make a difference. Coach Joe Judge and his staff will make the final choices, and he said neither pedigree nor draft position will play into it.

"I think John’s definitely got a skill set that he does a good job of combining that speed and athleticism with football instincts,” Judge said.

Davis has 69 career starts for the New Orleans Saints, Denver Broncos and Minnesota Vikings (2020). He was a member of the Broncos’ Super Bowl win over the Carolina Panthers.

In 96 games, he has 479 tackles, 3.0 sacks, 15 passes defended, two fumble recoveries, one forced fumble, and one interception, which he returned for a touchdown. Davis went undrafted out of Sacramento State in 2014.

NOTES: Second-year offensive tackle Matt Peart passed his physical and was taken off the Reserve/Physically Unable To Perform list. He had back issues at the start of camp. Peart is expected to compete with Nate Solder for the job at right tackle. Veteran linebacker Blake Martinez is back in the building but remains on the COVID-19 list.