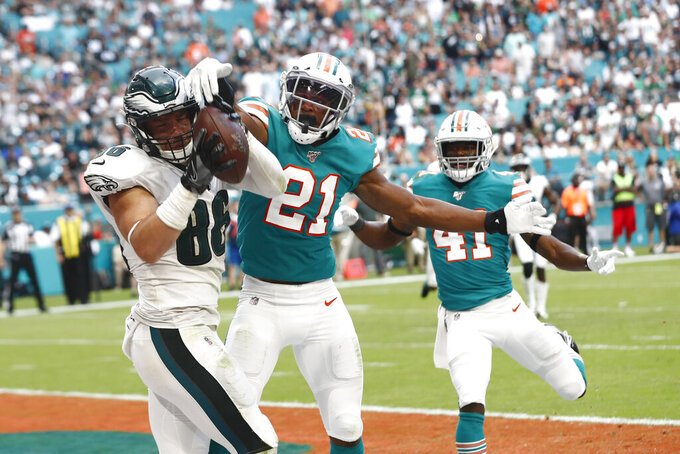 PHILADELPHIA (AP) — The Philadelphia Eagles don't need any outside help to win the NFC East if they win their last four games.

Winning one game is enough of a challenge right now.

Coming off a stunning 37-31 loss to the dreadful Miami Dolphins, the Eagles (5-7) seem closer to rebuilding an aging roster than making a playoff push. But they're still right in the mix in a division led by the mediocre Dallas Cowboys (6-6).

"We're not throwing in the towel," coach Doug Pederson said Monday. "We have a lot of football left. We have a great opportunity. There is still a chance for us. We control our own destiny. So that's going to be the message moving forward to this football team, and the leaders have to embrace that and they have to also take it to the team as well. So I feel really good about that, and those will be the conversations that I have with those guys this week."

The Eagles will play three division opponents four times to close out the season, including a pair of games against the New York Giants (2-10). They'll visit Washington (3-9) and host Dallas in Week 16.

Last year, the Eagles had to win their last three games and needed the Vikings to lose once to get into the playoffs. Backup quarterback Nick Foles led them to those three wins and the Bears won in Minnesota in Week 17 to give Philadelphia the NFC's final playoff spot. Then the Eagles beat Chicago on the road in the wild-card game and led 14-0 in New Orleans before falling to the Saints 20-14 in the divisional round.

"I think that you can benefit from that, but you just don't turn the switch on in this league," Pederson said about drawing from last season's success. "You have to come to work every single day. You have to come ready, in the right frame of mind, and all that. You have to prepare and put in the work, just like our guys have done all season long.

"But I don't think you look up at the end of the day and go, 'Oh, let's wait until December and we'll start playing our best football.' It has to be a week in and week out thing. I do think our guys understand that, though. They have been able to do that. That's why when you talk about a team that is resilient, they've been through it. They've been tested that way. So that's the hope moving forward, that the guys see it and embrace it and we can get that done."

The secondary was torched by journeyman quarterback Ryan Fitzpatrick after holding Tom Brady and the Patriots and Russell Wilson and the Seahawks to 17 points apiece in the previous two games. The defense had allowed fewer than 225 passing yards in five straight games and opponents had scored 17 or fewer points in four straight. Fitzpatrick threw for 365 yards and three TDs.

Wide receiver Alshon Jeffery returned after missing two games with an ankle injury and caught nine passes for 137 yards and one TD. It was Jeffery's sixth-highest single-game total of his career.

Cornerbacks Ronald Darby and Jalen Mills were repeatedly beat by DeVante Parker and Miami's receivers. The duo had stabilized the secondary after returning from injuries, but Sunday was their worst performance since allowing more than 500 yards passing to the Patriots in a 41-33 win in the 2018 Super Bowl.

Running back Jordan Howard has missed the last three games with a stinger and remains day to day.

48-19 — Despite averaging 4.8 yards per carry, the Eagles only ran the ball 19 times and had 48 passes called. After taking a 28-14 lead on the first possession of the second half, they ran the ball just three times the rest of the game. Miles Sanders had a career-best 83 yards rushing on 17 carries.

The Eagles host the Giants on Monday night. The Giants have lost eight straight games, one shy of the franchise record set in 1976, when the team opened 0-9.