Tannehill ready to do whatever Titans need with Henry out 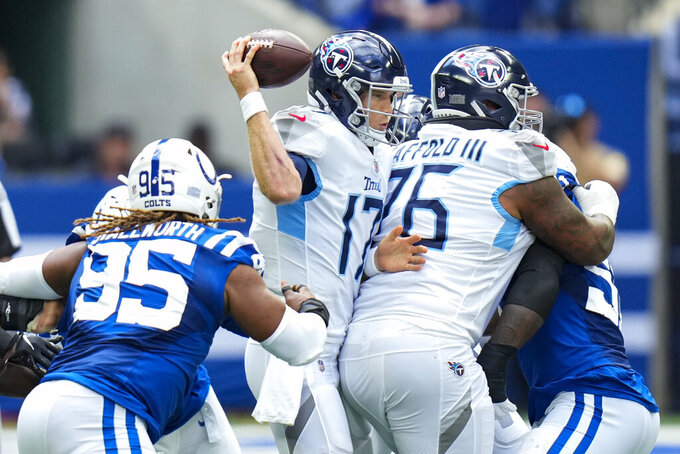 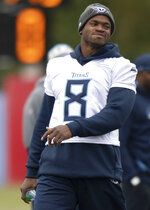 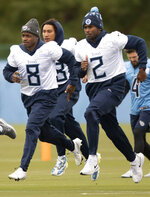 NASHVILLE, Tenn. (AP) — The Tennessee Titans have only one real choice after losing the NFL's rushing leader in Derrick Henry to a broken right foot.

“Keep moving,” Titans quarterback Ryan Tannehill said Wednesday. “We have to keep moving forward as a team, as an offense, and find a way to continue to play our football and play good.”

For the first time since becoming Tennessee’s starting quarterback in mid-October 2019, the pressure will be on Tannehill to deliver in the Titans’ passing game. And his first shot without Henry comes Sunday night in Los Angeles against the Rams (7-1) and three-time AP NFL Defensive Player of the year Aaron Donald.

The Titans (6-2) signed 2012 NFL MVP Adrian Peterson for what might wind up a committee approach to replacing the two-time rushing champ.

Henry had carried much of the offense before being hurt, running for 10 touchdowns through six games. Tannehill only got to 10 TD passes last weekend with his second three-TD game of the season. But Tannehill also is their second-leading rusher this season, averaging 7.2 yards per carry with three more TDs.

Tannehill is 26-12 since becoming Tennessee's starting quarterback. He just led the Titans to a 12th comeback when trailing in the fourth quarter or overtime with the overtime win in Indianapolis last week. He also has had a passer rating of 90 or better in three of four road starts this season.

He threw for 3,819 yards last season with a career-high 33 TD passes. This season, Tannehill has topped 300 yards only once this season. Tennessee ranks only 21st in the NFL, averaging 229.5 yards passing per game.

“His toughness, his understanding of our offense and what we are trying to do each and every week has been good,” coach Mike Vrabel said of Tannehill. “It can always improve. We have a lot of things to work on.”

The passing game isn't what was expected after the Titans traded for seven-time Pro Bowl wide receiver Julio Jones in June, pairing him with 2020 Pro Bowl receiver A.J. Brown.

Both receivers have dealt with hamstring issues this season. Jones has missed three games, including last week's win over the Colts. He has 17 catches and 301 yards receiving and is still looking for his first TD this season after officials overturned a catch at the back of the end zone in Seattle.

Brown has had his two best games over the past two weeks, and he caught a season-high 10 passes for 155 yards and a TD in Indianapolis.

Peterson got on the field Wednesday for the first time since signing with Tennessee's practice squad Tuesday. The Titans went through a walk-through, but Tannehill thinks Peterson's run style fits their offense as a physical, downhill runner.

Tannehill also doesn't expect the Tennessee offense to change much without Henry. Making the offense go means just playing for the quarterback.

“I don’t think you have to overthink it a lot,” Tannehill said. “Just continue to prepare to win a football game and make the plays that come up within the frame of what we are trying to accomplish offensively.”