Taylor steps in as Texans QB amid uncertainty with Watson 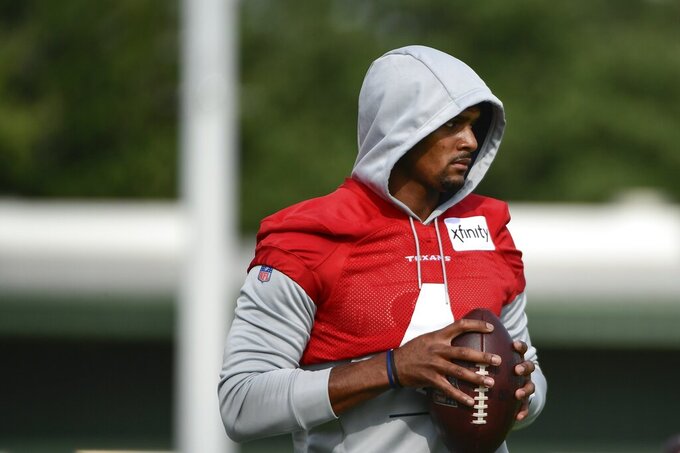 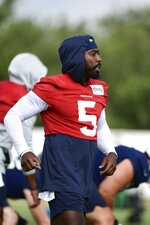 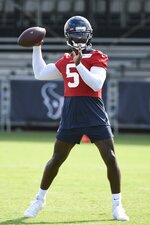 HOUSTON (AP) — With quarterback Deshaun Watson relegated to little more than a spectator so far in Houston Texans camp, Tyrod Taylor has been running the offense and asserting himself as the team’s leader.

“I definitely feel that guys look for me for leadership, and obviously that comes with the quarterback position, and I welcome that role,” Taylor said.

Though general manager Nick Caserio and new coach David Culley won’t say that they’re planning to start Taylor this season, everything that’s happened in practices this week has shown that they expect Taylor to replace Watson.

Watson led the NFL in yards passing last season and signed a four-year, $156 million contract extension with the Texans last offseason. But he became unhappy with the direction of the team and requested a trade in January after the Texans, who won the AFC South in 2018 and ’19, slipped to 4-12 last season.

His future was further clouded in March after 22 women filed lawsuits alleging that he sexually assaulted or harassed them. Houston police and the NFL are investigating the allegations, but no charges have been filed.

Watson still wishes to be traded and reported to camp solely to avoid being fined. He has been on the field for Houston’s first three practices but has only participated in individual work while Taylor and quarterbacks Davis Mills and Jeff Driskel have taken all the snaps during team drills.

Culley was an assistant with the Bills when Taylor played there and raved about his experience and leadership.

“He’s been there, and he’s done that,” Culley said. “He’s one of our guys right now, he’s been doing a nice job, he’s got a lot of experience. He’s been a starter in his league, he’s taken teams to playoffs in this league and right now with the competition that we are having, he’s right in the mix and doing his thing.”

Taylor signed a one-year deal with the Texans the day after the first lawsuit was filed against Watson. At the time it appeared Taylor would serve as Watson’s backup, but as the lawsuits piled up and Watson’s stance on the trade didn’t change, it started to look like he’d be taking over at QB.

Despite that, Taylor was careful not to say too much about his expected role when he spoke to reporters on Friday for the first time in camp.

“I feel comfortable being on the field,” he said. “It’s been a good three days. We’ve done a lot of good things on offense and continue to keep correcting and building as training camp continues.

"Me and Deshaun are friends,” Taylor added. “We’ve known each other for a number of years now. We’ve had conversations on the field, off the field, about football, about life. Everything has been a positive conversation, and it will continue to be that way.”

Taylor joined the Texans after a tumultuous 2020 season with the Chargers. He spent two years with the Chargers, backing up Philip Rivers in his first year before moving into the starting role last season.

He only started one game before being sidelined when a team doctor accidentally punctured his lung when giving a painkilling injection for a rib injury. By the time he recovered he had lost his starting job to Justin Herbert, who became the Offensive Rookie of the Year.

Taylor, entering his 11th NFL season, takes time each offseason to reflect on his work the year before and set goals for the next year. He refused to call his most recent reflection painful despite the medical mishap that derailed his season.

“I believe everything happens for a reason,” he said. “Whether you understand it or not you have to find the positive of everything. I’m completely healthy now... it wasn’t a hard thing to reflect on. Maybe it wasn’t what I (would have) liked to see happen last year, but you move forward, and you learn, and I definitely learned from it.”