Texans' Mills must improve if Taylor is out against Panthers 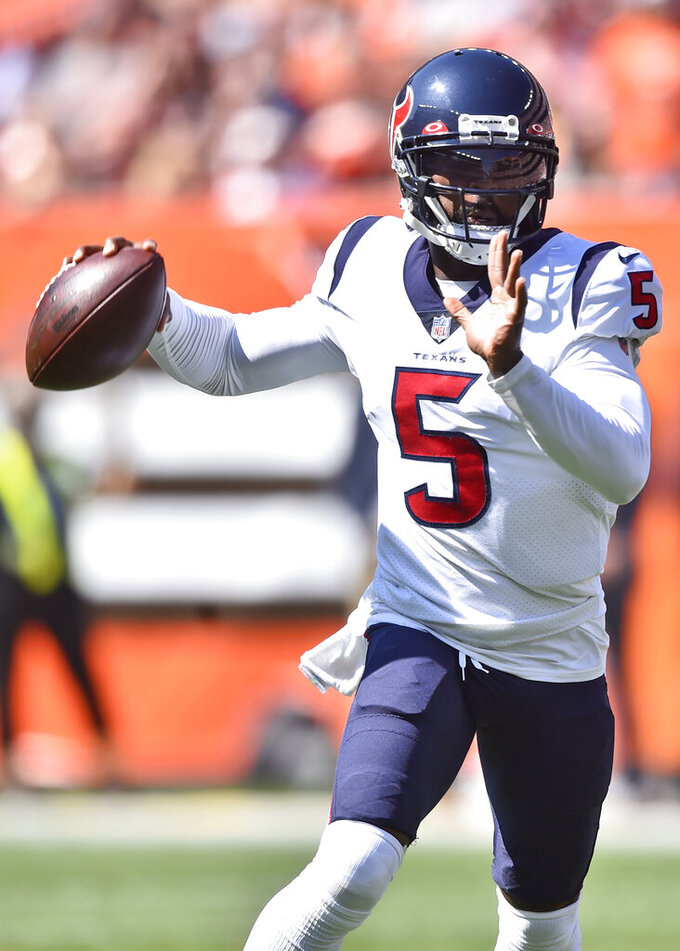 Houston Texans quarterback Tyrod Taylor looks to throw during the first half of an NFL football game against the Cleveland Browns, Sunday, Sept. 19, 2021, in Cleveland. (AP Photo/David Richard) 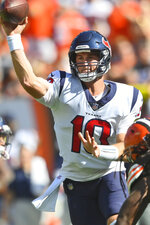 However, if his hamstring injury keeps him out, coach David Culley believes rookie Davis Mills can run the offense effectively.

“Our team has the utmost confidence in Davis,” Culley said.

Taylor was injured in the first half of Houston’s 31-21 loss to Cleveland on Sunday and didn’t return after halftime. Mills struggled early and threw an interception on his second possession. But he bounced back to throw a touchdown pass that got Houston within 3 early in the fourth quarter before the Browns put the game away.

“We know he’s always one of those guys that when a bad thing happens, he comes back, he makes a play,” Culley said. “He had the INT there and came back the next series and ended up just playing exactly like we thought he would play, it never bothered him at all.”

Running back Phillip Lindsay saw several young quarterbacks start in his last two seasons with the Broncos and knows things should get easier for Mills now that he has some experience under his belt.

“You guys all see how it is to be a rookie quarterback that has to get thrown in the fire right away,” Lindsay said. “But as he got more comfortable, as things went on, he looked sharp. He looked good.”

If Taylor can’t play, the Texans will likely promote Jeff Driskel from the practice squad to back up Mills. Deshaun Watson will not be an option, with Culley saying Monday that Watson would be inactive for Thursday’s game just as he has been for the first two games.

Watson has been listed as inactive/not injury-related following his trade request and after 22 women filed lawsuits alleging sexual assault or harassment.

The Texans are tied for second in the NFL in takeaways after getting five in the first two games. Houston was last in the NFL in 2020 with just nine and new defensive coordinator Lovie Smith made improving that number a priority this season. The Texans had an interception and recovered a fumble Sunday to give them four interceptions this season, which is one more than they had all last season.

Houston had 160 yards rushing in its opener, but managed just 82 yards rushing Sunday. The Texans will have to run the ball more effectively this week to help take pressure off Mills if he starts. If Taylor’s out, the running game will also take a hit after he ran for 55 yards and a touchdown in the first two games.

Safety Justin Reid continues to lead the defense and had an interception and forced a fumble against the Browns. The fourth-year player is tied for the NFL lead with two interceptions this season after also getting one in Houston’s win over Jacksonville in the opener.

Kicker Joey Slye made all three field-goal attempts in his debut with the team last week after Ka'imi Fairbairn was injured, but missed his only attempt Sunday from 41 yards.

WRs Nico Collins (shoulder) and Danny Amendola (hamstring) could miss Thursday’s game after being injured Sunday. ... Reid (knee) left Sunday’s game in the fourth quarter but Culley said he’s OK and will play against Carolina. ... CB Terrance Mitchell is in the concussion protocol.

5 — Not only does Mills have very little NFL experience, he hasn’t played much at all in the past two seasons after playing just five of six games for Stanford in 2020’s pandemic-shortened season.

Houston’s defense has been better than expected early and will need to continue to force turnovers to help make things easier for the offense if Taylor is out. If he can’t play, Mills must eliminate the rookie mistakes he made against the Browns and show more poise in the pocket to keep the offense on track.