This time Fangio knows Mack all too well 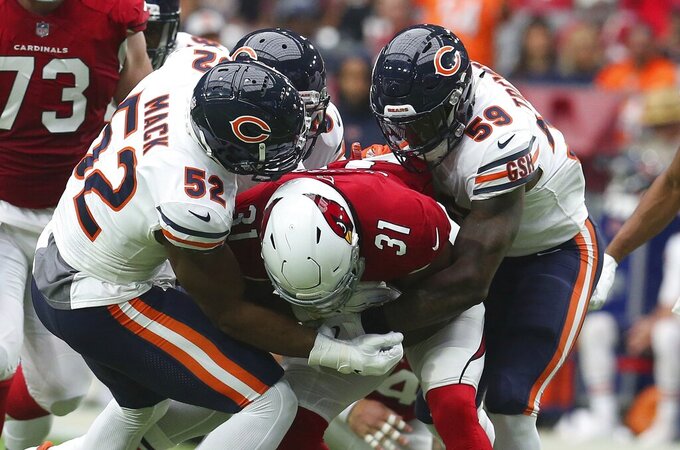 FILE - In this Sept. 23, 2018, file photo, Chicago Bears linebacker Khalil Mack (52) makes a tackle on Arizona Cardinals running back David Johnson (31) with help from Danny Trevathan (59) during the first half of an NFL football game in Glendale, Ariz. Trevathan returns with the Bears on Sunday, Sept. 15, 2019, to Denver, where he played from 2012-15 and won a Super Bowl. (AP Photo/Ralph Freso, File) 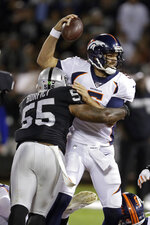 The Denver Broncos first-year head coach swears he didn't know much about the superstar pass rusher a year ago when he was coordinating Chicago's defense and the Bears acquired Mack in a blockbuster trade on the eve of their opener.

"I didn't know a lot about him other than he was a good player," Fangio insisted as he prepared his new team for the Bears' visit to Denver on Sunday. "When he came out of college, we were drafting very late in the first round in San Francisco at the time, so they said don't even bother watching him. So, I didn't watch him as a collegiate player. With him in Oakland and me in the NFC, I didn't really see him play a lot.

Mack made quite the first impression with the Bears, getting a sack, an interception, a forced fumble and a fumble recovery against the Green Bay Packers 24 hours after the trade. He finished the year with 12½ sacks and a career-best six forced fumbles in helping the Bears to a 12-4 record and their first playoff appearance in eight seasons.

In the playoffs, Mack had a tackle for loss and two quarterback hits in the Bears' stunning 16-15 loss at home to the Eagles, after which the Bears lost their defensive mastermind when John Elway gave Fangio his first head coaching job at age 60 .

With Fangio taking his disguised pass coverage philosophies to Denver, Chuck Pagano took over Chicago's defense, which remained dominant in a 10-3 loss to Green Bay last week. Mack didn't harass Aaron Rodgers like he did a year ago, although his teammates had five sacks as the longtime rivals kicked off the NFL's 100th season.

Von Miller didn't touch Derek Carr in Denver's 24-16 loss at Oakland, and he wasn't alone: The Broncos failed to hit an opposing quarterback for the first time since Dec. 14, 2014, at San Diego.

Fangio said Miller actually had a pretty good game, especially against the run, but Miller was critical of his performance.

Miller and Mack will be seeking their first sacks Sunday in the surprising matchup of division cellar dwellers.

Other subplots in the Bears' first visit to Denver since 2011 and the first game at the newly renamed Empower Field at Mile High :

One of Fangio's favorite pupils in Chicago was ILB Danny Trevathan, who played in Denver from 2012-15, serving as the tone setter for the Super Bowl 50 champs.

"I really enjoyed coaching Danny," Fangio said, describing him as a "fiery guy ... who really likes to play football, which is contagious to everybody."

"That's who he is," Bears coach Matt Nagy said. "I think specifically after a tough loss like we just came off, you look for guys that can naturally take over. He is a born leader."

"He's a tough, nasty player and that's what I love about him," Davis said.

In which case, Davis does a good impression of Trevathan, Miller said.

"He's our thug," Miller said. "Every team's got to have one and Todd is ours."

"He's still a work in progress," Fangio said of Bolles. "But I think the future's very bright for him."

After his disappointing debut, rookie tight end Noah Fant said, "I expect more from myself."

So do the Broncos, who used the 20th overall pick on the Iowa tight end who caught two passes for 29 yards but cost Denver 31 yards in losses: 5 on a jet sweep that fizzled on OC Rich Scangarello's first play call, and 26 on two penalties.

Bears QB Mitch Trubisky has a history of bouncing back from poor performances. "Sometimes the ball just doesn't bounce your way but you've just got to bounce back," said Trubisky, who is 8-1 following a game in which his rating was 77.2 or lower. He had a 62.1 rating against Green Bay.