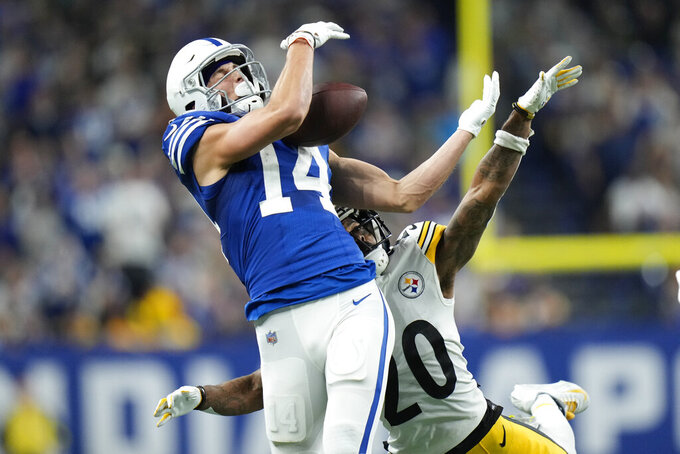 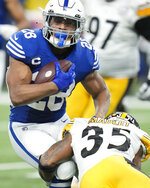 Less than 24 hours later, Saturday acknowledged he made the wrong call.

After watching game tape, rethinking the situation and reflecting on what could been done differently, Saturday essentially owned up to making a rookie coaching mistake.

"I wish I had that third down back. In all honesty, I wish I would’ve used a timeout. Just looking at it on film — I looked at it last night again, looked at it this morning again," he said Tuesday. “From a time perspective I felt good. But you could tell we were in disarray. Looking back, it’s a learning experience.”

Perhaps that's to be expected from someone with no prior coaching experience at the pro or college level and who wasn't even with the team until November.

But Saturday isn't the only one experiencing growing pains this season in Indy (4-7-1).

First-time play-caller Parks Frazier thought he could catch Pittsburgh off-guard with a quick running play on third-and-3 in the final minute.

Instead, a miscommunication had the Colts scrambling to line up properly — costing them 29 precious seconds and eventually the game.

It's been a mess all season, filled with a mishmash of lineups and just general mistakes.

The Colts spent most of the first half this season trying to patch a leaky offensive line before finally settling on rookie Bernhard Raimann at left tackle and second-year lineman Will Fries at right guard.

Both have struggled with penalties and missed assignments though Saturday appears content to live with their miscues, at least for now.

Second-year quarterback Sam Ehlinger lost his first two NFL starts despite having only one turnover.

Defensively, the Colts have been unable to protect fourth-quarter leads in their past three home games and offensively, Indy has been unable to take advantage of its final possessions all three times.

The predictable result: since winning Saturday's debut, Indy has lost two straight and five of six overall and has all but sealed its postseason fate with plenty of blame to go around.

“I thought we could get it off quicker than we did, that’s on me understanding what personnel is in the game, what formations we were in and the guys getting back to their natural positions of where they are going to line up,” Saturday said. “I thought we had the advantage but unfortunately, should’ve hit the timeout, given us our best play, best opportunity.”

Tight ends. When Ryan was completing passes Monday night, it was largely because Jelani Woods and Mo Alie-Cox were on the receiving end. Ryan was 22 of 34 with 199 yards and Woods and Cox combined for 10 receptions and 112 yards.

Dallis Flowers. The rookie kick returner opened the second half with an 89-yard return that gave Indy the spark it needed. Four plays later, the Colts scored their first touchdown, and they moved inside the Steelers 5-yard line on each of their next two possessions.

Alec Pierce. Indy's second-round pick appears to have hit the rookie wall. Ryan only threw two balls to him Monday and he finished no catches. In four November games, he had four catches for 51 yards and no touchdowns.

Pro Bowl CB Kenny Moore II left in the fourth quarter with a shin injury and did not return. Saturday did not have an update after the game or Tuesday. It's unlikely anything will be decided until later this week. DE Kwity Paye (ankle) did not play and it's unclear when he might return.

Zero — The Colts got off to another slow start against Pittsburgh with a forgettable first quarter.

Ryan was nearly intercepted on his first pass and was picked off on his second. Indy finished the quarter with zero total yards.

It's hard to know where they go from here. The Colts now have a short week before visiting Dallas and Minnesota with a bye in between games. They're not home again until the Monday night game after Christmas and any momentum they had from Saturday's hiring has faded.