Titans eager to respond after offense 'got hit in the mouth' 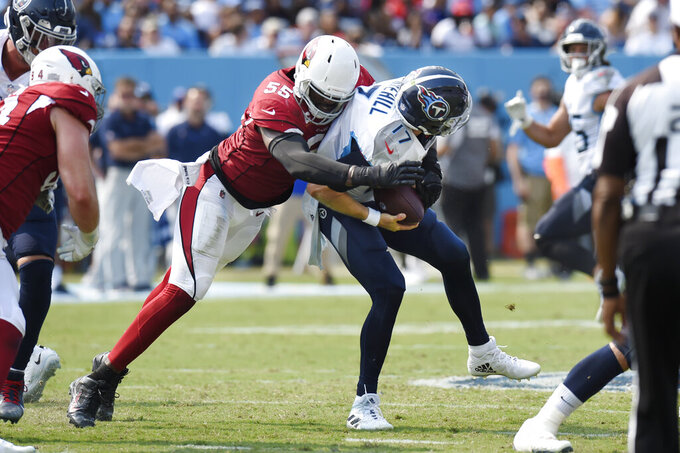 NASHVILLE, Tenn. (AP) — The Tennessee Titans are trying to get back to what they do on offense after a stumbling performance in their season opener, and Ryan Tannehill says that means playing up to their own standards.

Starting better and handling adversity will help as well.

“We kind of got hit in the mouth early, right?" Tannehill said Wednesday. “And we go out and didn’t get the start that we wanted, and we didn’t respond well. It took us whatever, four drives before we moved the ball. So that’s unacceptable. We have to be able to respond quickly.”

The Titans gave up the first 17 points and didn't stay on the field as an offense with more than one first down until the fifth drive. Tennessee managed to score a touchdown after driving 75 yards. Arizona answered right back with its own drive and led 24-6 at halftime in handing the Titans a 38-13 loss to open the season.

“That’ll be a challenge for us moving forward is if things don’t go perfectly, if things don’t go well early or at some point in the game," Tannehill said. “OK. Go to the sideline, make the adjustments in and come out swinging the next drive.”

Tennessee gets a chance to start looking like the offense that scored 30.7 points a game in 2020, fourth best in the NFL, on Sunday in a visit to Seattle (1-0).

On the to-do list for the Titans is finishing plays, moving faster, being aggressive, run cleaner routes, push piles and create holes for the run game.

Derrick Henry, the AP NFL Offensive Player of the year, ran for 2,027 yards last season and is the NFL's back-to-back rushing leader. He was held to 58 yards rushing on 17 carries with his longest run 19 yards. They can protect Tannehill better after allowing six sacks.

Taking care of the ball also is an area for improvement after three turnovers, two off fumbles when Tannehill was sacked. Three-time Pro Bowl left tackle Taylor Lewan struggled enough in his first game back from a torn right ACL that he thanked Chandler Jones for exposing his struggles.

“I’m confident that we’ll prepare, and Taylor will be part of that group that’s going to go out and work and try to focus and understand his matchups, understand the scheme and how we have to play,” Vrabel said. "And we all have to play better. We all have to coach better.”

The Titans also are a fast team that didn’t play like it in the opener.

The Pro Bowl receiver would only talk Wednesday about what his position group can do and said cleaning up the details is key. He caught four of eight passes thrown to him for 49 yards and a touchdown. Chester Rogers had four receptions on six passes for 62 yards. Julio Jones caught three of six passes.

“We just got to do a better job getting in and out of the huddle, just playing fast and just moving with more urgency,” Brown said.