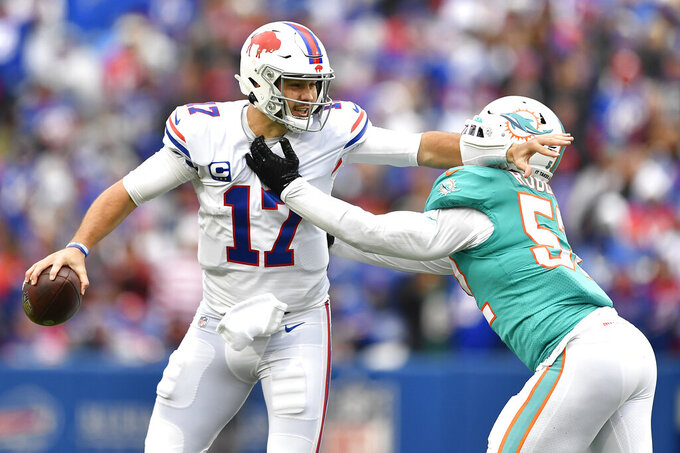 They lead their divisions and have been prime contenders for the top spot in their conference — and the only playoff bye.

Yet the outlooks for the Tennessee Titans (6-2) and Los Angeles Rams (7-1) aren't close to the same as they meet Sunday.

Tennessee, which not only owns a three-game lead in the AFC South but has swept the only possible threat there, Indianapolis, placed running back Derrick Henry on injured reserve. The 2020 Offensive Player of the Year, leading rusher in the NFL this season and probably the best player in the division is out with a foot injury.

“If anybody can, I guess come back, it would be Derrick,” coach Mike Vrabel said, “but not going to put any expectations on any sort of timeline.

Looking ahead — and far down the road to where they could be in February, hosting the Super Bowl — the Rams added what could be a key piece to their already formidable defense.

Von Miller was acquired from Denver, and while the linebacker no longer is an elite player, there could be enough left to make that Aaron Donald-led unit even more stingy.

“I feel like it frees us all up,” Miller said. “They’ll try to figure out creative ways to triple-team and double-team, but it can’t possibly be that effective. We’ve got great coaches. We’ve got great guys playing on this team, and we’ll be able to figure it out.

The action began Thursday night, as the Indianapolis Colts rushed for the highest single-game total in the NFL this season in a 45-30 win over the New York Jets. Carson Wentz threw three touchdown passes and Jonathan Taylor rushed for 172 yards and two scores as Indy (4-5) finished with 260 yards rushing. New York starting quarterback Mike White injured his right forearm in the first quarter as the Jets (2-6) lost their seven straight night game.

Other than Cheeseheads, the folks most disappointed (and annoyed) about Aaron Rodgers being sidelined while in the COVID-19 protocol must be at Fox, the network televising what could have been a terrific quarterbacks confrontation with Patrick Mahomes.

Kansas City hardly looks like a playoff contender as it enters the toughest stretch of its schedule, with a leaky offensive line, a struggling defense and an inability to consistently make big plays. Green Bay has won seven in a row, including that impressive performances at Arizona on Oct. 28. Even if star wideout Davante Adams returns from the COVID-19 list, he will have Jordan Love throwing the ball.

“You just watched this last weekend,” Chiefs coach Andy Reid says. "Two quarterbacks (the Jets' Mike White and Saints' Trevor Siemian) came in that hadn’t had an opportunity to play much, if at all, and won games. So, our guys are aware of that. You get yourself ready to play. In this league, there are small margins. It’s a true team sport. You get yourself ready to go.”

The Odell Beckham Jr. saga has diverted attention from a rare matchup in which both Ohio teams are contenders. They also both come off ugly defeats, the Bengals at the Jets, the Browns against the Steelers.

The Browns have won five of the past six in the series and quarterback Baker Mayfield is 5-1 in his career against Cincinnati with 17 touchdowns and a 111.4 rating. Cleveland leads the league in rushing, though Pittsburgh limited it to 96 yards last week.

Carolina needs running back Christian McCaffrey back on the field, and might get him. The Panthers snapped a four-game slide without him with their victory at Atlanta, and his hamstring injury seems healed enough for him to play.

The most intriguing storyline here could be Patriots rookie quarterback Mac Jones against cornerback Stephon Gilmore, the 2019 Defensive Player of the Year who couldn't get a new contract out of New England and was dealt to Carolina. Gilmore had an interception in his first game with the Panthers last week while playing 17 snaps.

Given their current forms, it might be impossible to believe that the Broncos have won six consecutive games in the series. The previous victory for Dallas was in 1995, also the most recent time the Cowboys reached the Super Bowl, or even the NFC championship game.

The Cowboys hope to get back Dak Prescott, though backup quarterback Cooper Rush performed admirably in last week's victory at Minnesota. Cornerback Trevon Diggs has a league-leading seven interceptions after going without one in a game for the first time this season against the Vikings.

A rugged matchup for the Jags — as if pretty much all their opponents don't have an edge on them. Finding a way to move the ball will be a huge challenge for Trevor Lawrence. Consider that Buffalo's safety tandem of Jordan Poyer and Micah Hyde own three interceptions each as part of a defense tied for the NFL lead with 11 picks. Buffalo’s stout run defense, which has only allowed Henry a 100-yard game, might not be facing Jacksonville starter James Robinson (bruised heel).

Bills QB Josh Allen has at least two TD passes and a passer rating over 100 in five consecutive games, the longest active streak in the NFL.

The Cardinals have had recent success in this series at the Niners, winning five of the past six. They are 4-0 on the road in 2021, and though they come off their first loss, the Cardinals have been perfect on fourth downs, 7 for 7.

James Conner has eight rushing touchdowns, all in the past six games. He is second in the NFL in that category behind Henry, who has 10 but now is injured.

The 49ers snapped a four-game losing streak last week, but are 1-7 at Levi’s Stadium the past two seasons.

Unlike Arizona prospering in the Bay Area, the Vikings have all of one win in Baltimore. That goes back to when the Colts made it their home. They beat the Ravens in 1998 when they went 15-1. The Vikings were 0-8 on the road against the Colts and 1-3 vs. the Ravens.

Also working in Baltimore's favor: The Ravens have the NFL’s longest active winning streak against the NFC with 11, and are an NFL-best 17-8 in games immediately following a bye week. Coach John Harbaugh is 10-3 in those games.

The Vikings lead the NFL in sacks per game and with 24 in seven games have already surpassed their 2020 season total (23).

With Jameis Winston gone for the season (left knee), veteran Siemian or do-everything Taysom Hill, back from injured reserve, will start at quarterback for the hosts. The Saints are 21-9 against the Falcons since Sean Payton became head coach in 2006 and have won three straight and six of the past seven meetings.

Atlanta's Matt Ryan has passed for at least two TDs in each of his past five road games. Tight end Kyle Pitts ranks second among rookies in yards receiving (484) and is tied for fourth in receptions (33). He's become the top target for Ryan with wide receiver Calvin Ridley out for personal reasons.

Rich Bisaccia can become the first interim head coach to win his initial three games since Gary Moeller took over in midseason and led the Lions to three straight wins in 2000.

The only Raiders coaches to start 3-0 were John Madden (1969) and Bill Callahan (2002). Coincidentally, Callahan replaced Jon Gruden, who was traded to Tampa Bay. Bisaccia, the special teams coordinator, took over when Gruden resigned in October.

Las Vegas has an NFL-worst 3-15 mark coming off the bye over the past 18 seasons and has been outscored by 20.5 points per game in losing the past four.

The sloppy Giants had 10 penalties in last Monday's loss at Kansas City. But the Giants have won three of the past four against the Raiders.

While the Eagles come off their best performance in two seasons, the Chargers come off two of their worst this year. They were routed at Baltimore, then handed a game to New England in LA last Sunday. LA’s defense is last in the NFL against the run and the Eagles are coming off their best rushing game in several years, totaling 236 yards from Boston Scott and Jordan Howard.

The Chargers have a dynamic running back in Austin Ekeler, tied for second in the NFL among RBs with eight scrimmage touchdowns.

Monday night is no time to be in the Steel City for visiting NFL teams. The Steelers are 27-5 in Pittsburgh since “Monday Night Football” began in 1970, including 19 straight wins. The previous Monday night home loss was in 1991 against the Giants. Pittsburgh’s .662 winning percentage (49-25) on Monday night is the highest in the NFL.

But the Bears have won their past three against Pittsburgh.

What could have been an intriguing matchup if a Deshaun Watson trade had gone through now is, well, the worst on the schedule — perhaps for the entire season and not just in Week 9. It's second NFL game involving two teams with 1-7 records: the other was Carolina against San Francisco in 2004.