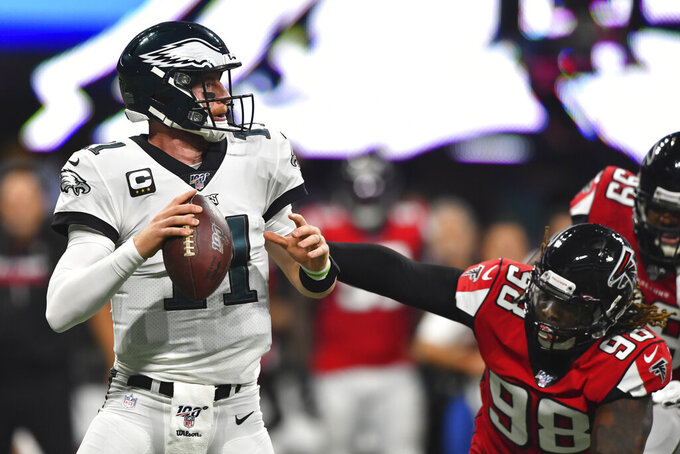 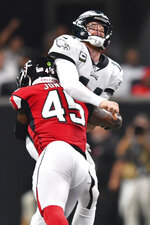 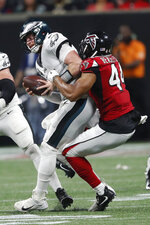 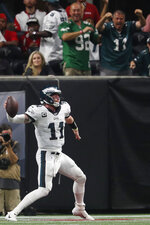 ATLANTA (AP) — Carson Wentz kept losing receivers, but still did everything in his power to will the injury-depleted Philadelphia Eagles to one more score.

He came up just a few yards short.

Tight end Zach Ertz caught Wentz's short pass but was stopped at the 9 with 30 seconds to go, ending the Eagles' comeback attempt in a 24-20 loss to the Atlanta Falcons on Sunday night.

The Eagles (1-1) lost Dallas Goedert to a pregame calf injury that left them with one tight end. Wentz's top two receivers, DeSean Jackson and Alshon Jeffrey, went down with respective calf and groin injuries early on.

"It was tough," Wentz said. "We're by no means going to make excuses and we've always talked next man up, but some of the stuff tonight you can't make up. I've never seen guy after guy like that early in the ballgame, but guys stepped up. Guys were resilient. We came up a little short today, but I'm proud of the way the guys fought."

Wentz didn't escape unscathed, taking a shot the ribs from linebacker Deion Jones on the first of his two interceptions and missing six snaps because he was in the sideline medical tent assuring officials he wasn't suffering from a concussion. He was sacked three times and hit 10 others.

Enough frustration had piled up that Wentz spiked the football as hard as he could after running for a 1-yard touchdown that gave the Eagles their first and only lead of the game with 3:13 remaining.

"You game plan all week and have all these personnel packages and then they kind of all go out the window on game day," Wentz said. "But the coaches do a great job, and guys were ready to step up."

Nelson Agholor took on a bigger role at wideout and caught eight of 11 targets for 107 yards and one TD. He also let the ball slip through his hands after he'd beaten coverage near the left sideline on the final drive. It likely would've been a 40-yard winning score. Agholor made some amends with a 43-yard catch a few snaps later, but time was about to run out

"Yeah, but I've still got to make that play," Agholor said. "It's something that we prepared for in pregame. We were trying to track it in the light. I've got to find a way to catch it all. Remember where it's going to be and look it all the way in."

The Eagles suffered other injuries, too. It's a pattern the team has gotten accustomed to in recent years.

Starting defensive tackle Tim Jernigan had a foot injury in the third quarter, left the game and departed the locker room afterward in a boot. Cornerback Sidney Jones had a head injury but was cleared to return. Special teams player Corey Clement hurt his shoulder.

"I don't know what it is," right tackle Lane Johnson said. "It's just bad luck. It sucks, especially when you have some really good talent out there that would make the game a whole lot better for you."

Wentz completed just eight of his first 20 attempts as the pocket collapsed often in the early going. He finally found his footing, though, and was able to mostly dodge the pass rush in the second half. He completed 25 of 43 passes for 231 yards and 4-yard score in the third.

The Eagles got no help from their running game with Miles Sanders, Jordan Howard and Wentz combining for a 2.3 average on 21 carries.

"You're down a lot of guys," center Jason Kelce said. "Obviously we didn't run as well as we wanted to, so kind of got one-dimensional for a little bit of it. I thought Carson did well. I think the whole offense could've done better.