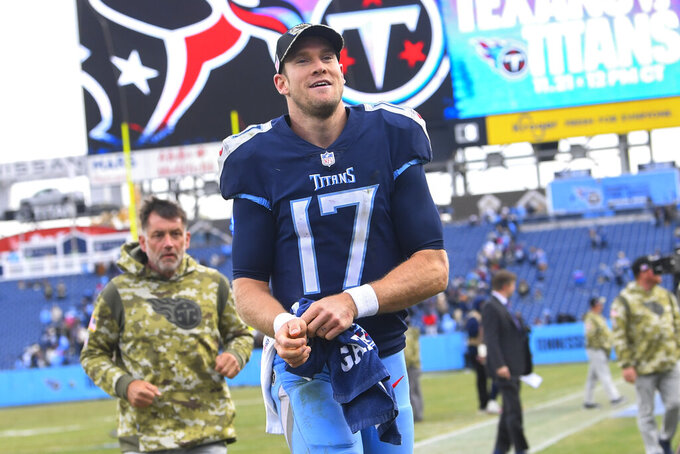 NASHVILLE, Tenn. (AP) — Ryan Tannehill fumbled and immediately dove toward the ground, trying to grab the ball back only to be beaten by his teammate, receiver A.J. Brown.

With Derrick Henry and Julio Jones already on a lengthy injured reserve list, Tannehill's Tennessee Titans teammates absolutely worry about their starting quarterback fighting for a loose ball even though they know he once played wide receiver.

“He understands the game, and he knows how to protect himself,” left guard Rodger Saffold said Wednesday.

"Sometimes it’s hard to trust that when he’s playing quarterback.”

This season, Tannehill is doing whatever it takes to help the Titans win. He's a big reason why Tennessee (8-2) sits atop the AFC with the NFL's longest active winning streak at six straight even if his statistics don't reflect all that he's doing with Derrick Henry and Julio Jones among the 15 Titans currently on injured reserve.

Tannehill’s been sacked 29 times through 10 games after being sacked only 24 times all last season. He also has had more interceptions with eight than in each of the past two seasons. But Tannehill also ranks 12th in the NFL with 2,358 yards passing.

With Henry out — a running back still tied for the NFL rushing lead despite missing the past two games with a broken right foot, Tannehill also is the Titans' leading rusher in both yards (169) and touchdowns (five).

“Ryan is obviously our leader,” coach Mike Vrabel said. “He is our quarterback, and we will go as he goes.”

Tannehill took over as the Titans' starting quarterback in mid-October 2019, and he's gone 26-10 since then. This season, he's helped Tennessee match Arizona and Green Bay for the best record in the NFL. This is the Titans' best start since opening the 2008 season 10-0.

And that's the only stat that truly matters to Tannehill with the Houston Texans (1-8) visiting Sunday.

Tannehill is doing that. After throwing for a career-high 33 touchdowns last season, Tannehill has only 12 TD passes this season. But he is just two off his career best of seven TD runs set last season.

He threw for 213 yards and a TD last week, posting a 105.9 passer rating despite battling a stomach bug all weekend. He also ran for a TD, giving him four games this season with at least one score rushing and at least one passing. That's the most such games in the NFL through 10 games.

Tannehill has been working with a mix-and-match receiving group and offensive line because of injuries. Brown, the top wide receiver, missed most of two games with a hamstring early. Jones missed three games with his own injured hamstring before being put on injured reserve.

In the 23-21 win over the Saints, Tannehill completed passes to 11 different Titans, and he connected five times with Marcus Johnson for 100 yards.

“Tannehill is doing an amazing job getting the ball out, and guys are getting open,” left tackle Taylor Lewan said after the Saints' game. “Timing has been awesome. The O-line has been protecting pretty well. We’ll keep working. We’ll keep working the run game and get more consistent as it goes.”

NOTES: The Titans seem to be healing up if only based on Wednesday's injury report listing only 11 players. Tennessee had 15 on the report last week not counting two players later added to the injury report. The Titans only went through a walk-through without helmets, but six did not practice: RG Nate Davis (concussion), OLB Bud Dupree (abdomen), CB Chris Jackson (foot), LB David Long (hamstring) and RB Jeremy McNichols (concussion). DT Jeffery Simmons (ankle) and OLB Harold Landry (hamstring) were limited.