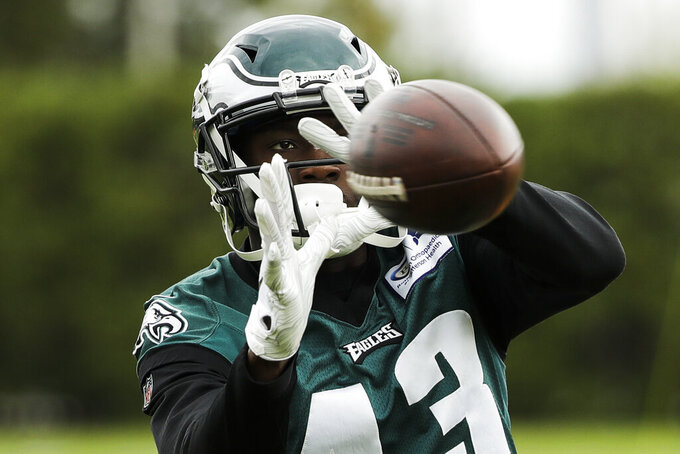 The Philadelphia Eagles entered the season with an offense that had potential to be dynamic because of their three top wide receivers but things have unraveled.

Jackson was spectacular in his return to Philadelphia, catching touchdown passes of 53 and 51 yards in the season opener. But he injured his abdomen in the next game and still hasn't returned. He's getting close to playing and the Eagles desperately need his speed.

Agholor dropped what should've been a go-ahead 60-yard TD pass in the final two minutes of a loss at Atlanta in Week 2. He's had other drops and became the subject of national jokes when a Philadelphia man said he jumped into action to help rescue babies during a house fire and "we were catching them, unlike Agholor."

Agholor was blasted for his effort on a deep ball in a 37-10 loss at Dallas last week. Agholor explained that he didn't run the route well enough to catch up to the ball and his feet weren't in position to dive for it.

Jeffery last week denied he was the anonymous source who told an ESPN reporter the offense needs to be simpler and Carson Wentz has to check the ball down more. He denied it again this week after the team's sideline reporter for radio broadcasts named him as the source.

Jeffery dropped a pass from Nick Foles that turned into a season-ending interception in a playoff loss at New Orleans last January.

Third-year pro Mack Hollins has been mostly invisible filling in for Jackson. Hollins dropped what should've been a TD pass in a 38-20 loss at Minnesota two weeks ago. He has one catch on six targets despite playing 138 snaps the past four weeks.

Rookie second-round pick J.J. Arcega-Whiteside dropped what would've been a game-winning TD pass in a loss to Detroit in Week 3. He has just two catches and has only played 25 snaps the past four games.

Since Jackson's performance in Week 1, the Eagles have just two catches of 30-plus yards from a wide receiver.

Coach Doug Pederson tried to explain the ineffective play of his wideouts by spreading the blame.

"It's hard when your quarterback sometimes doesn't necessarily have all the time to throw," Pederson said. "He's having to scramble and move around and it gets you off rhythm, gets you off schedule. So that's a part of it. We are getting some guys open and it's been documented already with drops and different things like that this year.

"It's still a group that we have a lot of confidence in, a lot of trust, a lot of faith in. We've had opportunities to complete balls down the field we've missed. We just have to keep working. We can't stop working. There is a lot of football left."

Wentz pointed the finger at himself instead of calling out teammates for their drops.

"I take a lot of it," he said. "There's lots of plays in these losses that I'd love to have back and I think everyone would say the same thing. There's a lot of execution, a lot of good plays that we leave out there. I know personally as a quarterback, as a leader, there's things I have to do to get better and to get this team in the right position to win these ballgames."