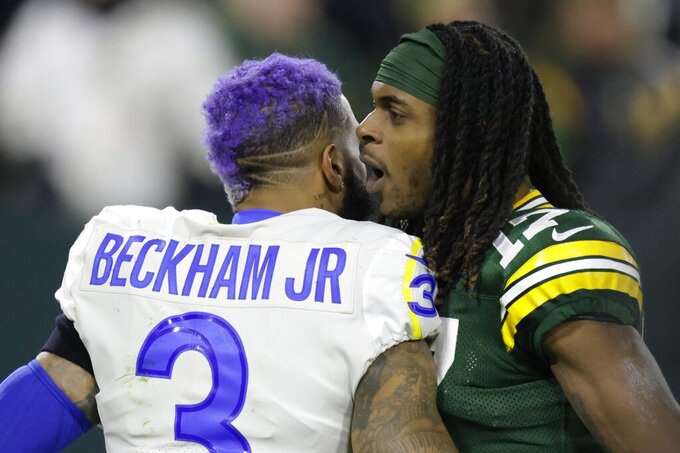 After Von Miller left his Russian sable hat and the tears behind in Denver following his trade from the Broncos to the Los Angeles Rams, he cracked, “I went to bed 4-4 and woke up 7-1.”

Talk about a Hollywood ending for the Super Bowl 50 MVP.

He figured he had Super Bowl 56 in his sights just like he did Cam Newton all afternoon all those years ago when he kept separating the football and the Lombardi Trophy from the Carolina quarterback's grasp.

An encore, however, seems to be slipping away from Miller's clutches, just like so many quarterbacks of late.

L.A. has been more dystopia than utopia for Miller, even with Odell Beckham Jr. working his way out of cloudy Cleveland and teaming up with him in sunny Southern California.

The drought began with a 28-16 loss to Tennessee at home when Miller sat out with a bum ankle that also forced him to miss his final game for the Broncos. He made his nondescript Rams debut in a 31-10 loss at San Francisco a week later, and finally made his mark in L.A.'s 36-28 loss at Green Bay on Sunday.

Unfortunately, it wasn't for a sack — he hasn't had one of those since sharing a takedown of Ravens QB Lamar Jackson with McTelvin Agim way back on Oct. 3 — but for his late helmet-to-jaw hit on Aaron Rodgers that drew a 15-yard penalty.

Miller has just half a sack since September, when he had four sacks and won the AFC's Defensive Player of the Month award in his return from an ankle injury that cost him all of 2020.

He has lost the last six games he has played in, and his former teammates in Denver are riding high after winning three of four without him, including a victory over Washington that he sat out, a signature victory at Dallas and a thumping of the Chargers on Sunday that tightened up the AFC West.

While the Rams (7-4) are still sitting pretty in the NFC playoff picture despite being two games behind the Cardinals in their division, the Broncos (6-5) can surge into the AFC West lead with a win Sunday night at Kansas City (7-4).

George Paton's trade of the franchise's career sacks leader for a pair of 2022 draft picks jolted the Broncos out of their doldrums.

“I honestly think it was like a kick in the butt because Von, he did so many great things: Super Bowl MVP, 10 sacks, 20 sacks, just doing that constantly,” said Miller's old pass-rushing partner, Bradley Chubb. “And we might have had some guys around here that got a little comfortable or whatnot, and when you see a guy like Von Miller get traded, you're like, ‘Whoa! so we could really trade anyone around here.’”

Suddenly, Chubb said, everybody was squirming.

“That's one of the best players to come through Denver and when you traded him, it gave everybody that sense of urgency," Chubb said. "Nobody's job is safe and we've all got to kick it up a notch.”

The Rams are still trying to find success with their 32-year-old superstar linebacker.

They blew a golden chance to leapfrog the Packers (9-3) in the race for homefield advantage in the NFC playoffs.

Matthew Stafford threw a pick-6 for the third consecutive game and he also fumbled away the football at his own 6, setting up Rodgers' 1-yard TD run that got the scoring started.

Rams coach Sean McVay discussed the importance of stopping their “self-inflicted wounds” as they attempt to recapture their early-season form.

Two of those came directly from McVay himself at frigid Lambeau Field.

He went for it on fourth-and-1 from his own 29 in the first quarter and running back Darrell Henderson was stopped by safety Adrian Amos for no gain.

That led to a Mason Crosby field goal that put the Rams in a 10-0 hole, the kind of early double-digit deficit that so often negated Miller's pass rushing prowess his last few seasons in Denver.

“It felt like it was a short conversion,” explained McVay, who made an even bigger blunder in the fourth quarter when the Rams outscored the Packers 11-0, only to come up short when Amos recovered an onside kick with 17 seconds left.

Trailing 36-25 with about 90 seconds remaining, the Rams reached the Green Bay 35-yard line and were facing second-and-15 — and long odds. They needed a field goal and a TD with a 2-point conversion sandwiched around a successful onside kick.

Stafford hit Cooper Kupp for 14 yards, bringing up third-and-1 from the 21 with 1:11 and no timeouts left.

Instead of throwing the ball into the end zone on third down, the Rams ran it, and nose tackle Kenny Clark stopped Henderson for no gain.

By the time Matt Gay's 39-yarder sailed through the uprights to make it a one-score game, only 18 seconds remained.

“I mean, even if they pick up the first down and get a new set of downs, the clock is still running,” Aikman said. "But they're battling the clock now and it being a two-score game, you throw it, try to get it into the end zone. Then, if you don't make it, it stops the clock, kick the field goal and then see if you can get the onside kick.

“So, a lot of time taken off there. That's one that McVay would like to have back.”

While Miller awoke the next morning 7-4, the fact is he hasn't played in a game his team won since Sept. 26, he hasn't had a sack since Oct. 3 and that return trip to the Super Bowl seems as far off as ever.