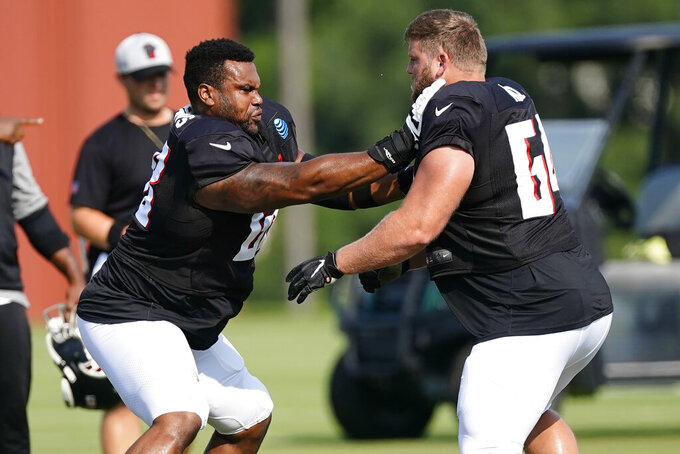 FLOWERY BRANCH, Ga. (AP) — Josh Andrews, who was the favorite to open the season as the Atlanta Falcons' starting left guard, was placed on injured reserve Wednesday after suffering a broken hand in Tuesday's practice.

Players can return from injured reserve after three weeks this season.

Andrews' injury was a setback to offensive line plans for Atlanta's opening game against the Philadelphia Eagles on Sept. 12.

Two rookies are candidates to move up at left guard. Jalen Mayfield, a third-round draft pick from Michigan, could focus on guard after also working at tackle in training camp. Drew Dalman, a fourth-round pick from Stanford who also has worked at center, is another candidate to fill in for Andrews.

Another candidate is Colby Gossett, a guard who was awarded to the Falcons on a waiver claim on Wednesday after being cut by Cleveland. The Falcons' staff observed Gossett personally in the Browns' 19-10 win over Atlanta in the final preseason game last week.

Andrews signed a one-year deal with Atlanta after starting in four of 15 games played with the New York Jets in 2020.

NOTES: The Falcons signed 15 players to their practice squad, including running backs D'Onta Foreman and Caleb Huntley, who were part of the cuts for the initial 53-man roster. Among others signed to the practice squad were offensive lineman Willie Beavers and wide receivers Juwan Green and Austin Trammell. Tight ends John Raine and David Wells and cornerback Chris Williamson also were signed.