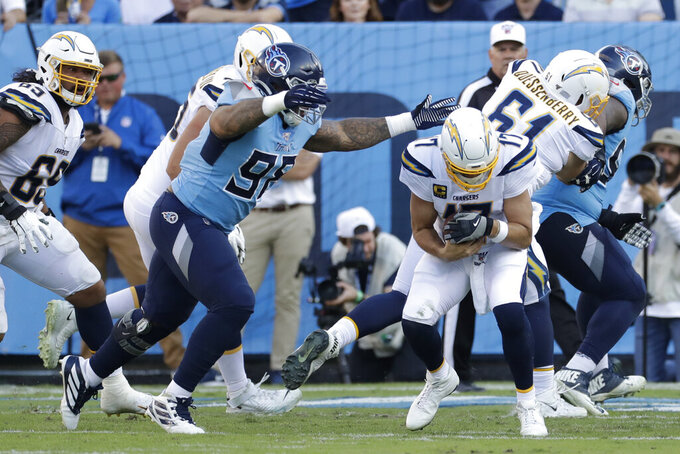 NASHVILLE, Tenn. (AP) — Philip Rivers and the Los Angeles Chargers thought they scored the go-ahead touchdown not once, but twice inside the final minute against the Tennessee Titans.

Yet again, the Chargers found a way to stop themselves near the goal line in a 23-20 loss Sunday.

After the replay official ruled Austin Ekeler had been stopped a yard outside the goal line off a pass from Rivers, the Chargers thought Melvin Gordon scored on a 1-yard run that was overturned again for being short of the goal line. Then, Gordon fumbled with the Titans recovering, giving the Chargers a league-high five turnovers inside the red zone this season.

"It was crazy," said Gordon, who fumbled in his third game back from a holdout for a new contract. "You feel like you won, and then slow motion shows your knee down before you passed (the goal line). I thought I got in, but obviously it showed that I was short, and we thought that (Ekeler) got in, but he was short. It's just unfortunate."

The Chargers (2-5) have lost three straight and five of their last six, and turnovers in crucial moments near the goal line cost them in a 13-10 loss to Detroit in Week 2 and again against Tennessee. The Chargers have three fumbles, and Rivers has been intercepted twice in the end zone on throws from the 7 and the 2.

They also have had at least seven TDs nullified due to either penalty or replay.

Rivers said their issues with turnovers near the goal line are crazy.

"The fourth down before the half against Denver. The third-and-goal against Denver on the 2 where I threw the interception," Rivers said. "The fumble in Detroit. The fumble right here? Did I leave one out? Pretty big consequences with those. The two in Denver is 14 points. The one in Detroit, we're only down three right? And then today.

"So those are three wins if we handled our business down there."

Rivers nearly rallied the Chargers from a 23-13 deficit with 6:39 left, and he thought he had thrown his third touchdown pass of the game on a 16-yarder only to see the replay official rule Ekeler had been stopped a yard outside the end zone. Rivers still finished with a 108.3 passer rating, becoming only the fifth player in NFL history with 100 career games with a passer rating of 100 or higher.

He also passed a pair of fellow 2004 draft picks in career passing yards during the second quarter. Rivers needed only 105 yards to pass Eli Manning (56,537) and Ben Roethlisberger (56,545), and he had 77 by the end of the first quarter and 158 by halftime to keep climbing that list. He finished by throwing for 329 yards and two TDs.

Ekeler thought he had his second TD after scoring on a 41-yarder with 5:09 left. He finished with seven catches for 118 yards.

"I looked at the replay and was like, 'It's probably going to stand,'" Ekeler said. "But that wasn't the case."

After Ekeler was ruled down shy of the end zone, the Chargers had a false start on the next snap. Then, Rivers threw to Mike Williams in the end zone, drawing a pass interference penalty on Titans cornerback Malcolm Butler. Gordon ran twice, only to be stopped and then stripped of the ball.

Gordon fumbled twice, losing the second. He ran 16 times for 32 yards with nothing going longer than 6 yards.

Chargers coach Anthony Lynn said he'd never been in a ballgame like this before with the roller-coaster of emotions at the end. The Chargers, missing three starting defensive linemen, stopped the Titans on fourth-and-inches near midfield with 2:35 left to set Rivers up for what would've been a big comeback.