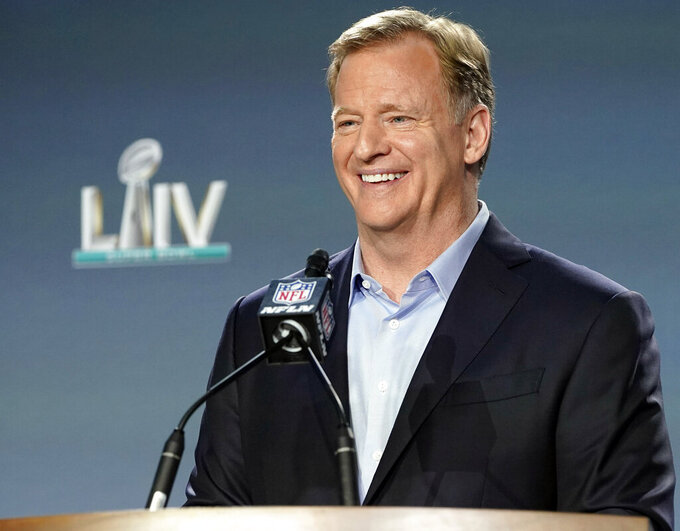 FILE - In this Jan. 29, 2020, file photo, NFL Commissioner Roger Goodell smiles before answering a question during a news conference for the NFL Super Bowl 54 football game in Miami. Goodell has sent a letter to fans outlining the league's plans to play during the coronavirus pandemic. As veterans begin reporting to training camps this week, Goodell noted Monday, July 27, 2020, how COVID-19 has “turned the world upside down.” (AP Photo/David J. Phillip, File)

NEW YORK (AP) — NFL Commissioner Roger Goodell has sent a letter to fans outlining the league's plans to play during the coronavirus pandemic.

As veterans begin reporting to training camps this week, Goodell noted Monday how COVID-19 has “turned the world upside down.”

“COVID-19 will continue to present a major challenge to nearly every area of American life. Football is no exception,” Goodell wrote.

“Every step of the way, our focus has been on the safety of players, coaches, personnel, fans and our communities. Our planning has followed the lead of medical experts and public health officials, including the CDC, the White House Task Force, governors and state health officials. As we have developed our 2020 playbook for the return of football, safety continues to be our first priority; that commitment will remain paramount as players return to the field."

The league and the players' union reached agreement on a plan last Friday, after all preseason games were canceled. Team facilities were shut down by Goodell in late March and only began reopening on a cautious basis this summer.

“The NFL in 2020 will not look like other years,” Goodell added. "Players and coaches will be tested for the virus regularly, including every day for a while. Preseason games have been canceled. Everyone in the team environment must follow rigorous health and safety protocols to keep themselves and each other safe. When there is a positive test, strict regulations will be enforced to isolate and care for that individual and to contain the virus before it spreads.

“Even the sideline will look different. And, state and local health guidelines will help determine whether fans will attend the games. These adjustments are necessary to reduce the risk for everyone involved.”

Goodell stressed the need for adaptability on all levels, citing how a virtual draft was held in April. All 32 teams held remote offseason training sessions, too.

The NFL has opted not to create a bubble environment, something the NHL, NBA, WNBA and MLS have done. With Major League Baseball experiencing difficulties on its first weekend of play with a plan similar to the NFL's, there is added anxiety about what Goodell's league has planned.

“This week training camps across the country are starting and before we know it, the NFL season will be here,” he wrote. “This is always the most optimistic time of year for our fans, and for all 32 teams. In a year that has been extraordinarily difficult for our country and the world, we hope the energy of this moment will provide some much-needed optimism.”