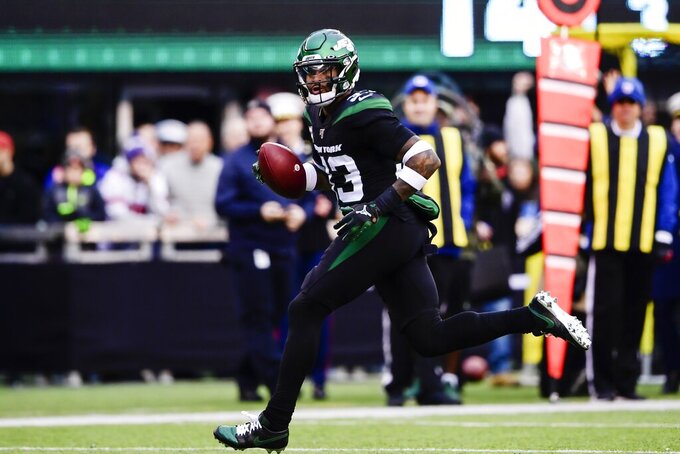 New York Jets strong safety Jamal Adams (33) returns a fumble for a touchdown during the second half of an NFL football game against the New York Giants, Sunday, Nov. 10, 2019, in East Rutherford, N.J. (AP Photo/Steven Ryan)

FLORHAM PARK, N.J. (AP) — Gregg Williams has coached lots of dominant defensive players during his 30-year NFL career, so he certainly knows talent when he sees it.

Well, the New York Jets defensive coordinator can't help but be downright wide-eyed at some of the things safety Jamal Adams has done this season.

“I told him this and I believe this with all my heart,” Williams said Friday, “he's just scratched the surface on what he can do.”

Adams is in his third season and already has one Pro Bowl appearance on his resume. The way he's going this season, there might be another to add to what could someday be a lengthy list.

“This is just a start for me, man,” Adams said. “It can be more. This is really nothing.”

He was referring specifically to his performance last Sunday in a 34-27 victory over the Giants. Adams had a team-leading nine tackles, two sacks, two forced fumbles and a fumble recovery that he returned 25 yards for a touchdown after he ripped the ball out of Giants quarterback Daniel Jones' hands.

“He’s elite,” linebacker Brandon Copeland said. “I’ve seen Von Miller do that. But to see a safety do that, that’s special.”

Adams joined Donnie Abraham (2004), Erik McMillan (1989) and Darrol Ray (1980) as the only Jets players to return a fumble and an interception for a TD in the same season. Adams had a 61-yard INT return at New England on Sept. 22. He was also just the third Jets defensive back to get two sacks in a game, joining Drew Coleman (2010) and Lester Lyles (1985).

It all added up to Adams being selected the AFC's defensive player of the week for the first time.

“I'm not satisfied with my performance,” Adams said. “I thought it could've been way better. That's just how I hold myself in that regard. My coaches know that as well. They're not shocked. They know we've just got to keep going.”

Another play against the Giants that made the highlight reels was when Adams launched himself over the offensive line and stuffed Jones in the backfield on a fourth-and-1 play before halftime.

It reminded many of former Pittsburgh star safety Troy Polamalu.

“I was patterning myself after Jamal,” Adams said, referring to himself.

No, he isn't shy, carrying that supreme confidence to stardom from his days at LSU to being the No. 6 overall pick in the NFL draft in 2017. Adams also calls himself, “President” — or, “Prez” for short.

After just 10 months and nine games together, Williams has already labeled Adams as one of his favorite players he has coached.

“He played pretty well and I'm proud of him,” Williams said. “But more importantly, I'm proud of his leadership. We've said this before in here: If you want to be the all-type of leader, you have to be at the top of our profession. You have to set the example first through doing it, before you say it. People pay attention to you when you do those types of things and you do your job, now they're going to listen.

“And he has been (a leader). That hasn't been a problem his whole life.”

Adams is a bundle of energy on the field — a bright light in what has been a mostly dismal season for the 2-7 Jets.

He yaps up a storm on the field, but his emotional approach can be contagious. Before the game against the Giants, Adams had a feeling he was in for a big game. So, he told his teammates to follow his lead.

“He said: ‘Match my intensity today,’” Copeland said. “He came out and delivered. There aren’t too many players who say something like that and deliver.”

That's why his name was so popular during the NFL trade deadline last month. General manager Joe Douglas set the price tag so exorbitantly high that teams such as Dallas and Baltimore couldn't move forward.

But the fact Douglas even fielded phone calls from other teams about Adams rubbed the star safety the wrong way. It led to a tense week during which Adams refused to speak to Douglas or coach Adam Gase until six days had passed and he had cooled off. The sides apologized to each other, and Jets chairman and CEO Christopher Johnson declared earlier this week that he'd love for Adams to remain with the team his entire career.

Adams wants to win a Super Bowl, and he insists he'd love nothing more than to be a key part of someday breaking the Jets' 50-year drought.

He's focused on right now, though. And, Adams has an idea of what topping his performance last week would look like.