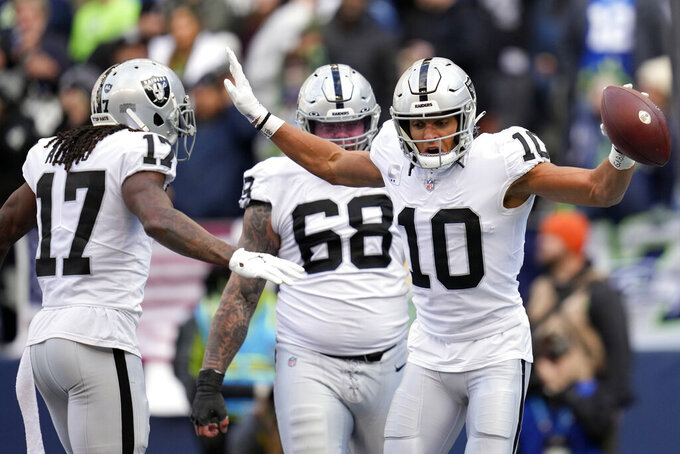 HENDERSON, Nev. (AP) — The Las Vegas Raiders looked like they were falling apart two weeks ago.

They had just lost at home to the Indianapolis Colts and a coach who was hired out of ESPN's studios. Quarterback Derek Carr became emotional in the postgame news conference, saying not all his teammates were fully committed. Wide receiver Davante Adams made similar comments.

And Josh McDaniels' job status was called into question — until owner Mark Davis said the next day his coach wasn't going anywhere.

The Raiders (4-7) remain well out of playoff position, but they responded to that loss with consecutive road victories over the Denver Broncos and Seattle Seahawks. The team is coming together behind Carr, Adams and Josh Jacobs, who leads the league in rushing and had an incredible game against Seattle.

“I think that part of the process is how you handle adversity,” McDaniels said Monday. “And I think it’s probably one of the things that I’ve matured in the most over many, many years ... is just understanding how you have to respond to that and what you need to say and how you need to act in the moment. The temperature inside the building never really changed.”

The Raiders will finish with four of their final six games in Las Vegas, beginning Sunday against the AFC West rival Los Angeles Chargers. Maybe they will carry over into this closing stretch what they accomplished the past two weeks.

“Obviously, it tastes better when you win, to listen and learn and correct things,” McDaniels said. "We’re all human, I think we would rather win and learn from that than lose. But I think some of the biggest lessons we’ve learned have come from the games that we haven’t been able to finish.”

Jacobs' performance against Seattle was historic. He produced 303 scrimmage yards, becoming the first player with at least 225 rushing yards and 70 receiving yards since at least 1950. Jacobs leads the league with 1,159 yards on the ground, and the Raiders are 4-1 when he has rushed for more than 100 yards. The loss was a single-point defeat at Kansas City. The Raiders declined to pick up Jacobs' fifth-year option before the season, and he's running like a man in line for a big payday from someone.

The pass defense forced the Raiders into a shootout because it didn't have much of an answer for Seahawks quarterback Geno Smith, who threw for 328 yards and had a 106.6 rating. Las Vegas has missed cornerback Nate Hobbs, who was placed on injured reserve on Oct. 17 with a broken hand. He should be back this week, but his return shouldn't be seen as a cure-all. The Raiders have allowed a league-worst average passer rating of 106.3, meaning they have a lot more problems than not having Hobbs in the secondary.

McDaniels made many positive decisions, but he had some head-scratchers, too. He decided to kick a 36-yard field goal with 14 seconds left in the first half rather take another shot at the end zone. He turned down trying to convert a fourth-and-1 in the third quarter and settled for a 25-yard field goal. There also was a pitch to Jacobs on fourth-and-inches in the fourth quarter that resulted in a 1-yard loss. Seattle took over near midfield and scored a go-ahead touchdown with 5:37 left.

Hobbs likely would have returned last week, but didn't practice Thursday and Friday because of an illness. He is expected to be back this weekend. Defensive tackle Andrew Billings (lower leg) was injured at Seattle, but McDaniels said he thought Billings would be fine.

20.43 — The top speed in miles per hour on Jacobs' 86-yard touchdown run in overtime, according to Next Gen Stats. It was the fastest of his career.

The Raiders will try to show they can finish again when the Chargers visit Sunday. In the season opener, Los Angeles held off a late Raiders rally to win 24-19.