Saints to remain down 3 assistant coaches at New England 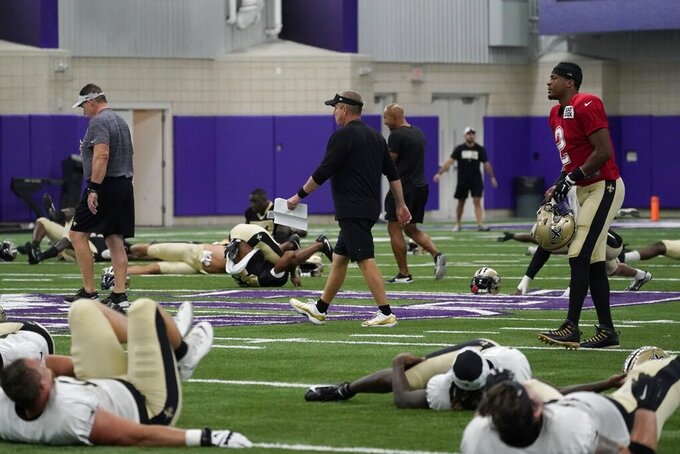 New Orleans Saints head coach Sean Payton, center, walks past quarterback Jameis Winston (2) and others as they stretch before the start of NFL football practice at TCU in Fort Worth, Texas, Wednesday, Sept. 22, 2021. (AP Photo/Tony Gutierrez)

It will be the second straight missed game for the trio since being among nine coaches who tested positive for COVID-19 late last week.

While one coach was able to return without missing a game, New Orleans was down eight members of the coaching staff, including five offensive assistants, during a 26-7 loss to Carolina last Sunday.

In addition to overseeing the defensive line, Nielson holds the title of assistant head coach. Young is a pass rushing specialist and Roushar is both the running game coordinator and tight ends coach.

The entire coaching staff was vaccinated before the season.

When vaccinated coaches test positive for COVID-19, they need to have two negative tests 24 hours apart before they can return to regular team activities. They are still able to attend meetings via video conference and analyze video of games and practice from the place where they are isolating.

The outbreak among Saints coaches occurred while the team was displaced to the Dallas area by Hurricane Ida, which struck southeast Louisiana on Aug. 29. The Saints cancelled their final preseason game, which had been scheduled for New Orleans, on Aug. 28 as the powerful storm approached. The NFL also moved their scheduled Week 1 home game against Green Bay to Jacksonville. New Orleans won that game, 38-3.

The Saints are scheduled to return as a team to the New Orleans area for the first time after playing the Patriots. They plan to resume practicing at their regular headquarters leading up to their Week 4 home game on Oct. 3 against the New York Giants.

That game remains scheduled for the Superdome despite a fire earlier this week that started on the stadium's roof when a pressure washer burst into flames.

Stadium officials have said a small area of the roof had minimal damage and will be fixed during previously planned recoating and repainting work. They also said the stadium remains water-tight.