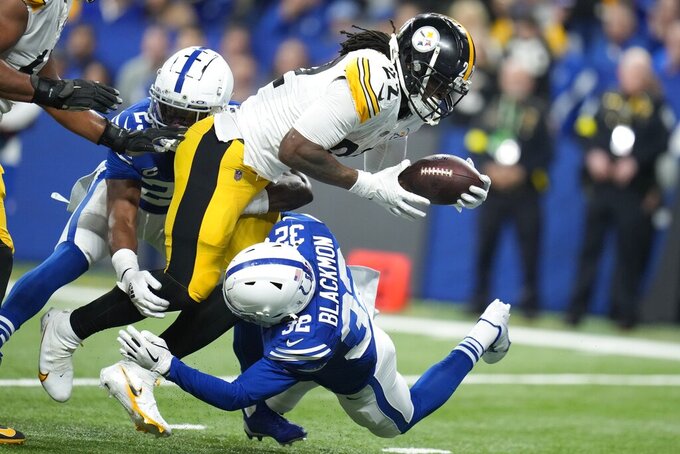 Pittsburgh Steelers' Najee Harris (22) runs for a touchdown against Indianapolis Colts' Julian Blackmon (32) during the first half of an NFL football game, Monday, Nov. 28, 2022, in Indianapolis. (AP Photo/Michael Conroy) 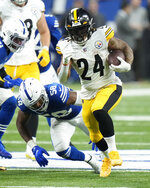 When he finally got the chance, in Week 12 during prime time, Snell showed everyone what he could do.

He ran for 62 yards, scored the go-ahead touchdown with 9:55 left and then watched as his Pittsburgh Steelers teammates fended off a last-minute comeback bid to beat the Indianapolis Colts 24-17 on Monday night.

“We go to any guy wearing a helmet,” Steelers coach Mike Tomlin said. “He was on the punt team coming in and sometimes you bet battlefield promoted.”

The Steelers (4-7) didn't have much of a choice after Najee Harris limped off the field in the first half. Harris was ruled out with an abdominal injury, and Snell took over.

He carried 12 times, produced his highest rushing total since an 84-yard game on Dec. 21, 2020, and with the Steelers trailing 17-16 and hundreds or thousands of Terrible Towels waving on third-and-goal, Snell found an open lane to the end zone. Kenny Pickett threw to George Pickens for the 2-point conversion to make it 24-17.

Pittsburgh's eighth straight win in this lopsided series allowed the Steelers to match San Francisco for the most Monday night victories in league history (52). The 49ers had edged in front last week when they beat Arizona in Mexico City.

Matt Ryan drove the Colts (4-7-1) into position to score, but Indy let a minute run off the clock in a span of three plays in Steelers territory, finally using its first timeout on fourth down with 30 seconds remaining. Ryan then threw incomplete to Parris Campbell on fourth-and-3 from the Steelers 26 and Indy fell to 1-2 under interim coach Jeff Saturday.

“I thought we had plenty of time,” said Saturday, who never coached at the pro or college level before owner Jim Irsay hired him to replace Frank Reich. “We had plenty of timeouts, so I wasn’t too concerned. This wasn’t a press for time, we just didn’t make enough plays.”

It was the Colts' first home Monday night game since September 2015 and the first half was a complete dud.

Pittsburgh drove into Indy territory on all five possessions and produced three field goals and Harris' 6-yard TD run to take a 16-3 lead. Colts players jogged to the locker room to a chorus of boos.

But when rookie Dallis Flowers returned the opening kickoff of the second half 90 yards, the atmosphere changed.

Four plays later, Jonathan Taylor scored on a 2-yard run to cut the deficit to 16-10. The Colts drove to the Steelers 1-yard line on their next possession, but Ryan and Taylor botched a handoff and Pittsburgh recovered.

Indy then forced a three-and-out and Ryan threw a 6-yard TD pass to Michael Pittman to give the Colts a 17-16 lead late in the third quarter.

It didn't last long. Snell, who played in college at nearby Kentucky, answered with the short TD run.

“He has an edge, he runs angry,” said Pickett, Pittsburgh's rookie QB who finished 20 of 28 for 174 yards and no turnovers. “I love the juice he brings. He's a detailed guy who does his job very well."

Tomlin said he was uncertain about Harris' diagnosis. Harris had 10 carries for 35 yards before departing. Cornerback Levi Wallace also left the game late with an undisclosed injury.

“We respect any decisions made around medical, but I don't know where the decision came from,” Tomlin said about Wallace's departure.

Steelers: Pickett joined Terry Bradshaw and Bubby Brister as the only rookies to start for the Steelers on a Monday night. ... Pickens caught three passes for 57 yards and Diontae Johnson had five receptions for 49 yards. ... The Steelers had 18 total yards in the third quarter.

Colts: Ryan threw for 199 yards with a touchdown and an interception after going 5 of 13 with 36 yards and compiling a 14.6 rating in the first half. ... Taylor ran 20 times for 86 yards and scored in his third straight game. ... Indy had zero total yards in the first quarter.

Irsay used the nationally televised game to highlight his mental health awareness campaign, Kicking the Stigma. Before the game, Irsay announced $1.4 million had been allotted to nearly two dozen nonprofit and charitable organizations, primarily in Indiana.

Colts: At Dallas on Sunday night.